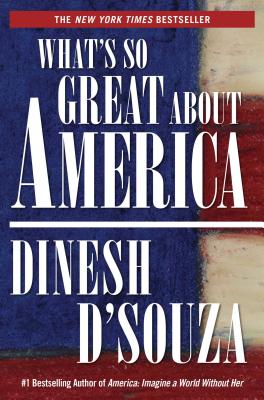 What's So Great about America

As an "outsider" from India who has had amazing success in the United States, the former White House policy analyst defends not an idealized America, but America as it really is, and measures the country not against an utopian ideal, but against the rest of the world in a provocative, challenging, and personal book. Read More

As an "outsider" from India who has had amazing success in the United States, the former White House policy analyst defends not an idealized America, but America as it really is, and measures the country not against an utopian ideal, but against the rest of the world in a provocative, challenging, and personal book. Read Less

All Editions of What's So Great about America

United States of Socialism: Who's Behind It. Why It's Evil. How to Stop It.

The Big Lie: Exposing the Nazi Roots of the American Left

Death of a Nation: Plantation Politics and the Making of the Democratic Party

Hillary's America: The Secret History of the Democratic Party

America Alone: The End of the World as We Know It

Liberty and Tyranny: A Conservative Manifesto

The Enemy at Home: The Cultural Left and Its Responsibility for 9/11

Letters to a Young Conservative

What's So Great about Christianity

An amazing look at the world we live in today. What's So Great About America is not a question. It is a statement ! ! !

D?Souza, Dinesh. What?s So Great About America (New York, New York: Penguin Books, 2002).
In contrast to the icon assassination of James Loewe (Lies My Teacher Told Me (New York, New York: Simon and Schuster, 1995), D?Souza is a thoughtful, persuasive writer that established his points with logic and supports them with facts and quotes. There does not appear to be any hostility towards his topic. His focus seems to be one of educating the reader, not ranting at them.
The first chapter of the book focuses on how America is failing to fundamentally understand what Islamic Terrorism is. He quotes Von Clausewitz, ?Know your enemy and then you will be able to fight him? and then chastises American leadership for failing to do this. With documented support he explains that Islam is not a religion of peace as the West understands the concept of peace. Although he has yet to discuss Turkey, D?Souza pointedly argues that Islam and the concept of separation of Church and State are mutually exclusive.
In addition to his logic and clarity in writing, one thing that I came to like about the author is that he strives to cover all the bases. In addition to writing about the sugar coating of this confrontation with Islamic philosophy, he equally points out the blitzkrieg parts of American culture that emotionally and economically threatens not only Islamic cultures, but some European ones as well.
D?Souza then proceeds to discuss the concept that political correctness does not exist in Islam. The religious leaders know very well what the Koran says and are unified in their 'whatever it takes' evangelic world goals. The author does not glorify Islamic terrorists, but feels it is a mistake to think they are all loser cowards. He counters that most are instead intelligent, at least middle class, brave and utterly dedicated to their religion. It is this dedication to the Islam and the Koran that makes them dangerous. It gives them the ideology of jihad. That is, the truly faithful should convert or kill all infidels. There is not an in between.
The author gives evidence that America is divided and ultimately weakened by the ideologues that feel everything bad is America?s fault and by the Multiculturalists who ?teach our young that Western civilization is defined by oppression.? D?Souza sees points in their positions as being relevant, but feels that they are so blinded by their ideology that they are a danger to the overwhelming positive points of the nation. By only focusing on the tragic thought that America is ?a breeding ground for racism, exploitation and genocide? they are condemning America to balkanism and disunity. He sees this is an anarchy that Islam will exploit to overwhelm us. A good and almost necessary read from the son of an immigrant from India.