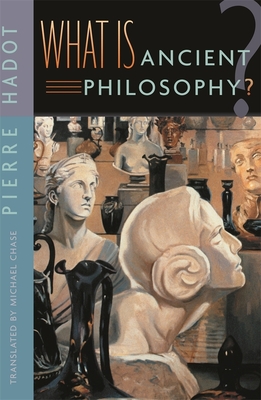 What Is Ancient Philosophy?

Hadot shows how the schools, trends, and ideas of ancient Greek and Roman philosophy strove to transform the individual's mode of perceiving and being in the world. For the ancients, philosophical theory and the philosophical way of life were inseparably linked. Hadot asks us to consider whether and how this connection might be reestablished today. Read More

Hadot shows how the schools, trends, and ideas of ancient Greek and Roman philosophy strove to transform the individual's mode of perceiving and being in the world. For the ancients, philosophical theory and the philosophical way of life were inseparably linked. Hadot asks us to consider whether and how this connection might be reestablished today. Read Less

All Editions of What Is Ancient Philosophy?

Philosophy as a Way of Life: Spiritual Exercises from Socrates to Foucault

The Inner Citadel: The Meditations of Marcus Aurelius

Plotinus or the Simplicity of Vision

The Veil of Isis: An Essay on the History of the Idea of Nature

Plotinus or the Simplicity of Vision

Philosophy as a Way of Life: Spiritual Exercises from Socrates to Foucault

The Spirit Of Ancient Philosophy

For some time, I have been studying the American philosopher Josiah Royce's 1892 book "The Spirit of Modern Philosophy" which discusses the nature and value of philosophy and the role in philosophical thinking of the history of philosophy. In the course of the work, Royce develops his own philosophy of absolute idealism based on his reflections on philosophy's history and purpose. Few thinkers today will follow Royce in this direction. I turned to Pierre Hadot's book, "What is Ancient Philosopher" to reflect further on the issues Royce considered. Hadot was a French scholar who published widely on ancient philosophy. His 1995 book post-dates Royce's by more than a century while it considers philosophers from a millennium earlier.

As does Royce, Hadot sees philosophy arising from the human experience as individuals reflect to find meaning in their lives. Hadot calls this situation "existential". But Hadot distinguishes far more than does Royce between a philosophical life and philosophical doctrine. Hadot understands philosophy as a way of life first with varied doctrinal teachings playing a secondary role.

As does Royce's book, Hadot's "What is Ancient Philosophy" shows great erudition but is written to be understood by non-specialists. Hadot examines briefly the growth of philosophy during the time before Socrates and then focuses on Socrates, Plato, and Aristotle. He distinguishes between knowledge of things and the possession of wisdom. Hadot offers a reading of Plato's "Symposium" to show the philosopher as the seeker of wisdom rather than its possessor. Philosophy is shown as a search rather than as a system of doctrines. Plato and Aristotle each established a long-lasting school which aimed to form the lives of its teachers and students more than to teach particular doctrines.

Hadot emphasizes that ancients understood the purpose of philosophy as the shaping and transformation of life rather than the teaching of doctrine as he examines stoicism, epicureanism, skepticism, cynicism and Neo-Platonism. He describes doctrinal differences but shows that the schools taught substantially similar ways of living. Philosophical living focused on making the most of life and its treasures in the present while not losing oneself in worrying about the past or in fearing for the future. A philosophical life also involved taking a broad non-egotistical view. The philosopher would understand the breadth and scope of reality and not see his or her own affairs only from a limited personal perspective. The core of Hadot's book is the discussion of a system of spiritual practices or, in Greek, "askesis" that philosophical practitioners taught. These exercises crossed the doctrinal boundaries of the schools.

"Yet, what does it mean to live life as a philosopher? What is the practice of philosophy? In this book I have tried to show , among other things, that philosophical practice is relatively independent from philosophical discourse. The same spiritual exercise can be justified after the fact by widely differing philosophical discourses in order to describe and justify experiences whose existential density ultimately escapes all attempts and theoreticizing and systematizing."

"Seen in this way the practice of philosophy transcends the oppositions of particular philosophies. It is essentially an effort to become aware of ourselves, our being-in-the-world, and our being with others. It is also, as Maurice Merleau-Ponty used to say, an effort to 'relearn how to see the world' and attain a universal vision, thanks to which we can put ourselves in the place of others and transcend our own partiality."

In my own narrow case, Hadot's book helped me think about Royce's "Spirit of Modern Philosophy" to find differences and similarities. But of course the book is much broader. Hadot's work will help readers understand philosophy as a way of life rather than, as it is too often viewed and practiced, as a dry academic exercise. The book reminded me of why I fell in love with philosophy many years ago.