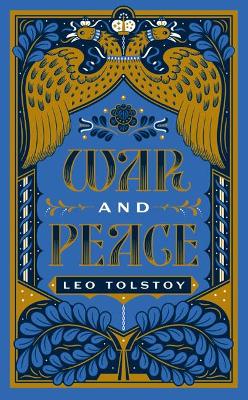 'If life could write, it would write like Tolstoy.' Isaac Babel Tolstoy's epic masterpiece intertwines the lives of private and public individuals during the time of the Napoleonic wars and the French invasion of Russia. The fortunes of the Rostovs and the Bolkonskys, of Pierre, Natasha, and Andrei, are intimately connected with the national history that is played out in parallel with their lives. Balls and soirees alternate with councils of war and the machinations of statesmen and generals, scenes of violent battles ... Read More

'If life could write, it would write like Tolstoy.' Isaac Babel Tolstoy's epic masterpiece intertwines the lives of private and public individuals during the time of the Napoleonic wars and the French invasion of Russia. The fortunes of the Rostovs and the Bolkonskys, of Pierre, Natasha, and Andrei, are intimately connected with the national history that is played out in parallel with their lives. Balls and soirees alternate with councils of war and the machinations of statesmen and generals, scenes of violent battles with everyday human passions in a work whose extraordinary imaginative power has never been surpassed. The prodigious cast of characters, both great and small, seem to act and move as if connected by threads of destiny as the novel relentlessly questions ideas of free will, fate, and providence. Yet Tolstoy's portrayal of marital relations and scenes of domesticity is as truthful and poignant as the grand themes that underlie them. In this revised and updated version of the definitive and highly acclaimed Maude translation, Tolstoy's genius and the power of his prose are made newly available to the contemporary reader. ABOUT THE SERIES: For over 100 years Oxford World's Classics has made available the widest range of literature from around the globe. Each affordable volume reflects Oxford's commitment to scholarship, providing the most accurate text plus a wealth of other valuable features, including expert introductions by leading authorities, helpful notes to clarify the text, up-to-date bibliographies for further study, and much more. Read Less

All Editions of War and Peace

The Kingdom of God Is Within You

The Death of Ivan Ilyich: And Other Stories

criticize Tolstoy? Great book. Arrived in a timely manner in good condition. HUGE in size. It's to laugh.

This is the translation to read

Reading literary masterpieces crafted in a different language puts a great burden on the translator; Constance Garnett's 1904 version in English was the benchmark for a century, but it has finally been superseded by this fantastic edition, the work of Richard Pevear and Larissa Volokhonsky. It cleaves perfectly to the original, both to the Story, and to the Epilogue (Tolstoy's general discussion of history, the year 1812, human understanding, and pretty much Everything Else). Tolstoy had an immense, insightful, thirsty, tenacious, and deeply personal mind. Throughout the Story you are subtly aware of it, of him -- that is, aware that even though the story is moving right along and there's plenty going on, this is the work of a master storyteller and there isn't a single detail in any scene that hasn't been put there on purpose, for a reason -- but in the Epilogue you are nose to nose with the old boyar, as it were in a freezing, echoey, bare Russian classroom while he pontificates and gesticulates in front of the chalkboard repeating point after point. It's hard not to be buffaloed by the whole immensity of it.

Fort most American readers, just keeping track of who's who is hard enough. There are AT LEAST eighteen principal and secondary players from three or four families, and they each have one or two surnames and maybe three nicknames! It is to whew. With this in mind I strongly recommend the reader put a Post-It note on the edge of the "PRINCIPAL CHARACTERS" page, just after page xvi of the Introduction, so it sticks out a little and you can refer easily to it. You will want to.

Also, begin your reading at Volume I Part One Chapter I, not with the Introduction. As with any book, skip the Introduction until after you've finished. Then, reading it is like having a discussion with the author -- or in this case, the translator -- and much more valuable.

The Russian Response to Woody Allan

Anyone who wants to try to understand the Russian soul must try to read this book. The Russians were not then, nor are they now, people like us (i.e. people raised in the English tradition.

I read War and Peace in 1984 along with the three famous novels of Dostoevyski. It
occurred to me the reason I liked all four was the translation made them accessible. Also
In War and Peace the novel was divided up into small sections which made it easy
to read and put down. I found all four novels a gateway into the mind of 19th century
Russians. I wish I read these books in high school when our country was in the
midst of the Cold War. I recommend them highly. The three novels by Dostoevski
were The Idiot, Crime and Punishment, and The Brothers Karamazov.

There's a reason why it's considered The Best

I took a Tolstoy course in university and it ended up being my favorite class of all time. What a lot of people don't realize is that the brilliance of Tolstoy and "War and Peace" is that in spite of its intimidating size and reputation, it's wonderfully easy to read and absorb. The way Tolstoy writes about love, death, fear, war and just about every other universal concern is magnificent. One second he's putting you right in the middle of a massive, chaotic battle and the next minute you're inside the mind of a character, privy to their deepest fears and desires. At the end of the novel I couldn't help but wonder how one man could create something so sublime. "War & Peace" is without question a must-read.