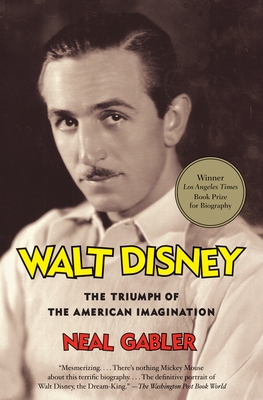 Walt Disney: The Triumph of the American Imagination

Neal Gabler, whose biography of Walter Winchell was named best nonfiction book of 1994 by "Time," now presents the definitive biography of one of the most important figures in 20th-century American entertainment and culture. Given complete access to the Disney Archives, Gabler paints an illuminating portrait of a legendary visionary. 32 pages of photos. Read More

Neal Gabler, whose biography of Walter Winchell was named best nonfiction book of 1994 by "Time," now presents the definitive biography of one of the most important figures in 20th-century American entertainment and culture. Given complete access to the Disney Archives, Gabler paints an illuminating portrait of a legendary visionary. 32 pages of photos. Read Less

All Editions of Walt Disney: The Triumph of the American Imagination

An Empire of Their Own: How the Jews Invented Hollywood

Winchell: Gossip, Power, and the Culture of Celebrity

Inside the Magic Kingdom

The Disney Way: Harnessing the Management Secrets of Disney in Your Company

The Art of Walt Disney: From Mickey Mouse to the Magic Kingdoms

Since the World Began: Walt Disney World: The First 25 Years

Disney is the entertainment icon of the baby boomers as well as most of our parents and grandparents with whom we enjoyed and shared his wonderful stories. For many of us the time we spent watching the Disney stories with siblings, friends, parents, and relatives were some of the best times of our own childhood. In order to write this terrific gift of a book Gabler seems to have had unique access to people who knew and worked with Disney. Because of its thorough research and its easy narrative, the ironies of his life are presented at a time in our lives when we are more likely to understand them.
Many of us thought of Disney as a magician who could create stories that were complete, honest and true. None of us were as cynical in the 40s and 50s as we became in the late-60s and thereafter. So even today I don't hear my contemporaries poking fun at Snow White, Pinocchio, or even Davy Crockett; we talk about coonskin caps and not alcoholic misadventures.
Because of the details Gabler presents about Disney's life, we can see and appreciate the ironies and frustrations of his genius. The intensity of Disney's approach to animation and animated films resulted in the terrific stories and movies we have all seen and loved. However, that intensity separated him from a number of his friends, many employees, and sometimes his own family. That he was driven as with other blessed artists made his work great, but the frustrations were significant and made living Disney's life somewhat less than great. As Gabler describes his progression from animator, to manager of animators, to studio head, to Disneyland and then to Orlando, Disney is feted for his achievements but doesn't seem to be truly satisfied. Not that Disney did not enjoy enjoyed his accomplishments or his own family, only that the stories and the parks seem not to have been as great an experience for him as they were for those of us who were consumed by his stories and will never forget our first visit to one of his parks.
When I was a boy we were not to watch television on school nights. My father especially opposed TV and thought the programming a mindless waste of time! The only exception was Wednesday night, for the one-hour Disney show. My siblings and I, my parents, (yes, my father too) and often my grandmother would turn on the TV and there would be Walt in his cardigan with a grin that told us a good story was about to be told. With Gabler's book I now know that his fingers were nicotine-stained, that he was likely frustrated with one or more project financings that were delayed, and worried about a myriad of other details. Knowing those things now, he still remains Uncle Walt to me, as well as the greatest story teller who ever lived.