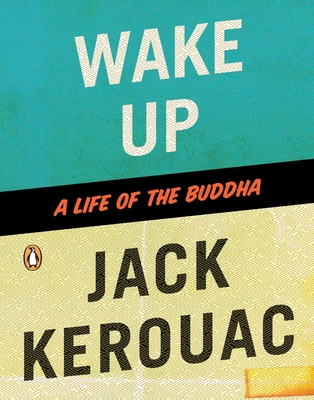 Wake Up: A Life of the Buddha

Never before published in Kerouac's lifetime, Jack Kerouac's Wake Up is a clear and powerful study of the life and works of Siddartha Gautama, the founder of Buddhism, from the author of On the Road. This Penguin Modern Classics edition includes an introduction by Robert Thurman. Wake Up recounts the story of Prince Siddhartha's royal upbringing and his father's wish to protect him from all human suffering, despite a prediction that he would become a great holy man in later life. Departing from his father's palace, ... Read More

Never before published in Kerouac's lifetime, Jack Kerouac's Wake Up is a clear and powerful study of the life and works of Siddartha Gautama, the founder of Buddhism, from the author of On the Road. This Penguin Modern Classics edition includes an introduction by Robert Thurman. Wake Up recounts the story of Prince Siddhartha's royal upbringing and his father's wish to protect him from all human suffering, despite a prediction that he would become a great holy man in later life. Departing from his father's palace, Siddhartha adopts a homeless life, struggles with his meditations, and eventually finds Enlightenment. Written at the end of Kerouac's career, when he became increasingly interested in Buddhist teachings, and collected for the first time in one book, this fresh and accessible biography is both an important addition to Kerouac's work and a valuable introduction to the world of Buddhism itself. Jack Kerouac (1922-69) was an American novelist, poet, artist and part of the Beat Generation. His first published novel, The Town and the City, appeared in 1950, but it was On the Road, published in 1957, that made Kerouac famous. Publication of his many other books followed, among them The Subterraneans, Big Sur, and The Dharma Bums. Kerouac died in Florida at the age of forty-seven. If you enjoyed Wake Up, you might like Kerouac's The Dharma Bums, also available in Penguin Modern Classics. '[Kerouac] defines the attitudes of an entire generation' Guardian Read Less

All Editions of Wake Up: A Life of the Buddha

On the Road: The Original Scroll

And the Hippos Were Boiled in Their Tanks

Kerouac's Biography Of The Buddha

In the early 1950s, Jack Kerouac (1922 -- 1969)became fascinated with Buddhism. In 1955, he wrote this short, highly personalized biography of the Buddha, "Wake Up". The biography was serialized in 1993 in the Buddhist magazine "Tricycle" but it has never before appeared in book form. The book was published to coincide with the 50th anniversary of Kerouac's most overtly Buddhist novel, "The Dharma Bums" which has also appeared in a new commemorative edition this year.

"Wake up" is a small gem. The writing is a passionate mixture of Kerouac and Buddhist texts. The book shows fervor and commitment and explains what Kerouac found valuable in Buddhism. The Buddha is treated as almost an Asian equivalent of Jesus. Kerouac never left the Catholicism in which he was raised. He was among the first of a long generation of Americans that have tried to combine the insights of the Buddha with a western religion.

For an American in the 1950s Kerouac had read widely if unsystematically in Buddhism. Thus this biography draws on texts from different Buddhist traditions which are not fully consistent with each other. In much of the book, Kerouac drew on a book called "The Buddhist Bible" in which an earlier American writer, Dwight Goddard, who likewise was attracted to both Buddhism and Christianity, translated some basic Buddhist texts. Kerouac had great problems with alcohol, drugs, and sex throughout his life. As often is the case, the writer was wiser than the man. "Wake up" evidences an excellent lay understanding of the Buddhism which so inspired Kerouac. While this book is introductory, informal and non-scholarly, Kerouac had a sympathetic grasp of his subject.

Kerouac describes the purpose of his book at the outset: "I have designed this to be a handbook of the ancient Law. The purpose is to convert." But this, Kerouac meant to transform the reader by showing the life-changing character of Buddhist teachings.

Here is how Kerouac begins his biography.

"Buddha means the awakened one. Until recently most people thought of Buddha as a big fat rococo sitting figure with his belly out, laughing, as represented in millions of tourist trinkets and dime store statuettes here in the western world... This man was no slob-like figure of mirth , but a serious and tragic prophet, the Jesus Christ of India and almost all Asia." (p7) Kerouac describes how the Buddha grew disillusioned with his life of luxury, his dancing girls, and even his lovely wife when, at the age of 29, he was confronted with the facts of aging, sickness and death. He left the life of a prince and became a wanderer in search of understanding human suffering for the purpose of alleviating it.

Kerouac loosely follows the story of Buddha's life, focusing upon his Enlightenment experience six years after his wandering began. The Enlightenment is described in a mixture of Buddhist texts and Kerouac's inimitable prose. As Kerouac describes it in part:

"Ho there! Wake up! the river in your dream may seem pleasant, but below it is a lake with rapids and crocodiles, the river is evil desire, the lake is the sensual life, its waves are anger, its rapids are lust, and the crocodiles are the women-folk."(p44) Earlier, Kerouac quotes an "eminent writer" who said that in looking for the cause of human unhappiness Gotama had "sought for it in man and nature, and found it not, and lo! it was in his own heart!" (p.21)

Kerouac leads the reader through the Buddha's ministry, his disciples, and his teachings including the famous "fire sermon" with a focus on the difficult Buddhist teachings of dependent origination and emptiness, which he explains well. Near the end of the book, Kerouac offers a long metaphysical discussion of the nature of reality and emptiness based upon a text known as the Surangama Sutra, which Kerouac knew from the translation in Goddard. The book closes with a Sutra-based account of the Buddha's death in which Kerouac writes

"The moon paled, the river sobbed, a mental breeze bowed down the trees.".... Voluntarily enduring infinite trials through numberless ages and births, that he might deliver mankind and all life, foregoing the right to enter Nirvana and casting himself again and again into Sangsara's stream of life and destiny for the sole purpose of teaching the way of liberation from sorrow and suffering, this is Buddha who is everyone and everything." (pp 145-146)

Readers interested in Buddhism or in Kerouac will enjoy this little-known book.