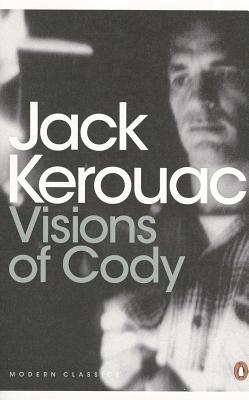 Kerouac's classic fictional tribute to Neal Cassady. Many years before its first unabridged publication, 'Visions of Cody' became an underground classic. Written by Kerouac at his creative zenith, the book is a celebration of the life of Neal Cassady, his great friend and inspiration. Appearing here as Cody Pomeray, Cassady was also immortalised as Dean Moriarty in 'On the Road'. The son of a drunken Denver drop-out, brought up homeless and motherless during the Depression, Cassady lived his life raw -- hustling in pool ... Read More

Kerouac's classic fictional tribute to Neal Cassady. Many years before its first unabridged publication, 'Visions of Cody' became an underground classic. Written by Kerouac at his creative zenith, the book is a celebration of the life of Neal Cassady, his great friend and inspiration. Appearing here as Cody Pomeray, Cassady was also immortalised as Dean Moriarty in 'On the Road'. The son of a drunken Denver drop-out, brought up homeless and motherless during the Depression, Cassady lived his life raw -- hustling in pool halls, stealing cars for marathon joy rides across the States, living wild and penniless amongst society's misfits and outcasts. He left a sizzling reputation in his wake, becoming the insane Beat Demon of San Francisco. Through him Kerouac created one of the few lasting heroes of 20th-century literature and established himself in the great tradition of American letters. Read Less

All Editions of Visions of Cody

On the Road: The Original Scroll

And the Hippos Were Boiled in Their Tanks

Kerouac, America, And The Holy Goof

Jack Kerouac (1922 -- 1969) wrote his long, sprawling book "Visions of Cody" in 1951-52, but the book was not published in full until 1972.. The book shows great nostalgia for a lost America of the 1930s and 1940s. The work is a meditation of Kerouac's friend Neal Cassady (1926 -- 1968), who is called Cody Pomeray in this book. Kerouac portrayed Cassady under the name Dean Moriarty in "On the Road". The book is about Kerouac himself as much as it is about Cody and about America.

The book includes much that is wonderful and much that is exasperating. There is no continuous plot but rather a stream of threads influenced by Proust, among other writers. Much of the book is written in a ranting, stream-of-consciousness style that Kerouac later named "spontaneous prose". Sentences and paragraphs often are long and wandering; words are invented or used in strange ways. The book can be highly difficult to follow. The lives of the protagonists and the vision of a past America connect the story.

Kerouac had an extraordinary eye for painstaking description as shown in much of this book. He paints pictures of diverse places that he or Cody knew, such as Lowell, New York City, San Francisco, Denver, Texas, Mexico City, and towns and rural areas of the Midwest. He offers a portrait of intimate streets, jazz clubs, railroads leading everywhere, fast cars on pre-freeway roads, pool halls, small diners. The book is full of pot, alcohol, and drugs and raw sexual depictions and terms. There are many short, effective character studies. The book also develops idealized, romanticized pictures of the two main characters, Cody and the narrator. Kerouac biographer Tom Clark aptly describes the book as offering a story of "a tantalizing power that removes one from humdrum existence and takes one on a remarkable voyage".

The narrative sections of "Visions of Cody" frame a long middle portion of the book that consists of Kerouac's transcripts of taped conversations between Cody, himself, and others that took place over five days at Cody's home in San Francisco. The characters are frequently high or drunk and the conversations wander interminably. They have a strong feel of authenticity (the original tapes have been lost) and provide insight into how the characters saw themselves. Unfortunately, they are of mixed interest, go on for too long, and disrupt the flow of the book. The next part of the book, called "Imitation of the Tape" in which Kerouac parodies what he has just done is even worse and tends to bring the book to a halt.

The opening and the closing parts of the book more than compensate for the difficulties in following the tapes. The final section of the book retells in a much more free-flowing impressionistic way the story of the cross-country trips that Kerouac made famous in "On the Road".

What did Kerouac see that inspired his love and devotion for Cody? He is described throughout as a hero and in the final farewell of the book as "Adios, King". Cody was a hustler, thief, and con-man who spent substantial portions of his life in jail. Abandoned by his drunken father, he fended for himself in pool halls and on the road from a young age. He was, apparently, irresistible to women and used them shamelessly. Cody also was highly intelligent, interested in bettering himself, and had ambitions to learn and to write. Kerouac admired his friend's vitality, sexuality, independence, wanderlust, and ability to take and love whatever life threw his way. Here is how Kerouac introduces Cody and Cody's father in a passage from the second part of this book.

" Around the poolhalls of Denver during World War II, a strange looking boy began to be noticeable to the characters who frequented the places afternoon and night and even to the casual visitors who dropped in for a game of snookers after supper wen all the tables were busy in an atmosphere of smoke and great excitement and a continual parade passed in the alley from the backdoor of one poolroom on Gleanarn Street to the backdoor of another -- a boy called Cody Pomeray, the son of a Larimer Street wino. Where he came from nobody know or at first cared. Older heroes of other generations had darkened the walls of the poolhalls long before Cody got there; memorable eccentrics, great poolsharks, even killers, jazz musicians, raveling salesmen, anonymous frozen bums who came in on winter nights to sit an hour by the heat never to be seen again, among whom (and not to be remembered by anyone because there was no one there to keep a love check on the majority of the boys as they swarmed among themselves year by year with only casual but sometimes haunted recognition of faces, unless strictly local characters from around the corner) was Cody Pomeray, Sr., who in his hobo life that was usually spent stumbling around other parts of town had somehow stumbled in here and sat in the same old bench which was later to be occupied by his son in desperate meditations on life."

Kerouac said: "I'm making myself seek to find the wild form, that can grow with my wild heart" in writing "Visions of Cody". He thought this the best of his books, and, for all the unevenness and frustrating qualities of the work, he may have been right. This is a book for readers with a strong interest in American literature and a passion for Kerouac. It is tempting to think of abridging the book, (it was first published in an abridged form in 1962) but it is best read as Kerouac wrote and conceived it. It is not a good place to start for readers unfamiliar with or with only a casual interest in this writer.