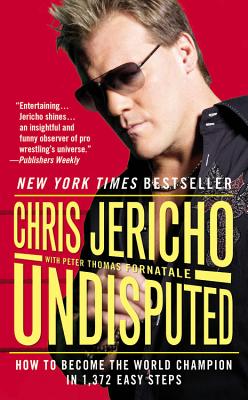 Undisputed: How to Become the World Champion in 1,372 Easy Steps

All Editions of Undisputed: How to Become the World Champion in 1,372 Easy Steps

No is a Four-Letter Word: How I Failed Spelling but Succeeded in Life

A Lion's Tale: Around the World in Spandex

The Best in the World: At What I Have No Idea

Foley is Good: And the Real World is Faker Than Wrestling

Hitman: My Real Life in the Cartoon World of Wrestling

The book starts off where its previous part ended - with the clock counting down his first appearance on WWE Raw.
Jericho writes about how he struggled to get going with the WWE

The book provides excellent insight into the tactics that Vince McMahon uses to motivate and test wrestlers. Jericho recalls instances where McMahon was brutally cold in his assessment of Jericho's work and/or value to the company, and other cases where McMahon was surprisingly easy to negotiate with, and eventually became complimentary of Jericho once he earned his respect.