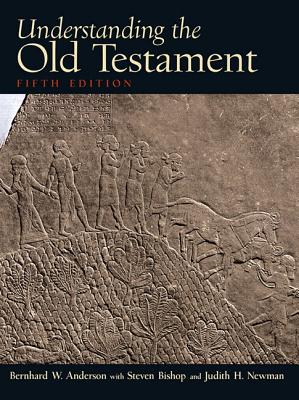 Understanding the Old Testament is a revision of America's bestselling definitive treatment of the Old Testament. It examines the literary aspects, historical background, and the newest archaeological discoveries. Read More

Understanding the Old Testament is a revision of America's bestselling definitive treatment of the Old Testament. It examines the literary aspects, historical background, and the newest archaeological discoveries. Read Less

All Editions of Understanding the Old Testament

The Unfolding Drama of the Bible: Fourth Edition

Out of the Depths

From Creation to New Creation

Living World of the Old Testament

Who Wrote the Bible?

The Oxford Companion to the Bible

A history of Israel.

This book was recommended to me by my friend, who is a retired Episcopal priest.
He had used it in Seminary and said it was the best book on the Old Testament he had used. He was right!
The folks at Best and Fastest got it to me in good time and it was as described.
I will order from them again!

A very well-written resource to enrich my study of the OT. Wish I had had it much earlier!

I am told that students used to flock to Bernhard Anderson?s seminary classes and I believe it. Here is a man who is determined to teach me something of the subject he loves, and goes about it in a way that virtually guarantees his success.

Before reading Anderson?s book, I read John Bright?s classic ?A History of Israel.? Bright looks at Israel?s history from the outside; he draws upon archeological and ancient documentary evidence to discuss historical events in the context of the surrounding nations of the ancient world. While Anderson approaches the Old Testament from a historical perspective, he does so from within the story of the people Israel. Anderson?s interest is in their story; and in particular in the radical and engaging story of the evolving relationship between this people and Yahweh, God of the covenant. He tells this story of rescue, promise, engagement, failure, forgiveness, apostasy and consequence in a clear and thorough manner. He defines terms and explains ideas that are necessary for a deepening understanding of the story. Along the way, he describes the complex process by which we have received the Old Testament in its present form. He unravels for us the complex authorship that has emerged from scholarly research that has given us the ?source? hypothesis and Form Criticism. It is fascinating to see how the oral traditions and early documents were brought together and revised at different periods in Israel?s history. Anderson demonstrates how the perspectives of later editors?and sometimes their agendas?appear in their revisions of much earlier events. Multiple versions of the same story from different sources are retained in the text. But emerging from this very human story is the story of a gracious God determined to find a way to help this people understand who God is, and to desire to become the people God chose them to be?as a community and as individuals.

Anderson allows the Old Testament to stand on its own merits. While recognizing that the Christian church emerged from and continues this long history of God?s working with Israel, Anderson does not filter the ancient stories through Christian eyes. He does not impose a Christian understanding upon the story and does not attempt to put that understanding into the mouths of its prophets. I find this very helpful. Anderson has provided for me a solid base from which the later revelation of God can now emerge in the mystery of the incarnation in the person of Jesus Christ.

Bernhard Anderson has enriched my understanding of the Old Testament. I recommend this book to all who would grow in that understanding.