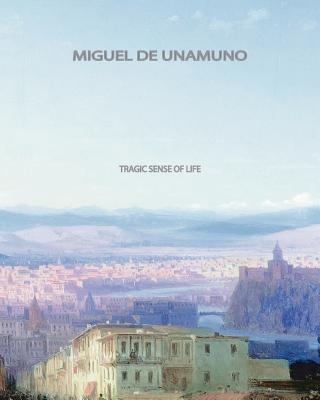 The acknowledged masterpiece of one of Spain's most influential thinkers. Between despair and the desire for something better, Unamuno finds that "saving incertitude" that alone can console us. Read More

The acknowledged masterpiece of one of Spain's most influential thinkers. Between despair and the desire for something better, Unamuno finds that "saving incertitude" that alone can console us. Read Less

All Editions of Tragic Sense of Life

The Lonely Knight Of Faith

The Spanish philosopher and novelist Miguel de Unamuno's (1864 -- 1936) "Tragic Sense of Life" is one of several important Twentieth Century works exploring the difficult character of religious belief and the conflict between faith and reason. Initially published in 1913, just before WW I the book was translated into English in 1921, shortly after it, by J.E. Crawford Flitch with revisions by the author. In the Preface to the translation, Unamuno wrote "I wrote this book not for Spaniards only, but for all civilized and Christian men -- Christian in particular, whether consciously so or not -- of whatever country they may be." The apparent limitation of the intended audience of the book to "Christians" would exclude other people of faith and secularists and may be a limitation of the work. As a non-Christian who explores religious -- philosophical themes, I learned from this unusual book.

The "tragic sense of life" for Unamuno derives from transience and from the inevitability of death. It is presented as a personal tragedy. Unamuno says that without a sense of eternal life the purposes of individuals become futile and meaningless. Unamuno's sense of eternal life derives from his Catholicism. He finds that the dread of death and its finality is basic to the human condition. The tragic sense of life derives from the need to be immortal for life to have meaning and from life's finitude. Reason teaches the finitude of life which ends with the death of the body. Faith seeks immortality. Hence, Unamuno derives the conflict between faith and reason which he explores and expands upon throughout the book. He does not try to resolve the conflict. Rather, Unamuno tries to use the conflict as a way to deepen understanding and appreciation of life.

The book is written throughout in a highly personal tone with Unamuno describing his own thoughts and experiences. He argues that philosophical thinking is poetic and religious in character and involves the whole person, before the abstractions of rationalistic thinking. The first six chapters of the book develop the dilemma as Unamuno considers the "hunger for immortality", Catholic teachings about immortality, rationalist objections to immortality, and the depths of doubt that result. The final six chapters offer what Unamuno says are imaginative rather than argumentative responses to the dilemma. He considers matters such as the search for love, the search for God, faith, the nature of religion, and living passionately and with purpose in every day life. Unamuno's final chapter includes a meditation on Don Quixote, whom the author sees as emblematic of the religious search for ideals and the willingness to endure loneliness and ridicule in the quest. Don Quixote comes to symbolize the author's own quest, the Spanish character, and the religious life.

Soren Kierkegaard and William James are strong influences on this book. In particular, Unamuno offers an emphatic, extreme reading of William James' famous essay "The Will to Believe". Unamuno suggests that individuals need to persist with their hearts in the quest to find God and immortality, even suggesting that such a quest creates the God which is sought. The book is written in a spirit of tension as Unamuno does not wish to fall into the pit of irrationalism.

The writing in this book is passionate. Its strength lies in its sincerity while its weakness lies in its constant state of overdrive. In his last chapter, Unamuno says that he wrote the book as a sort of an improvisatory free-flow, and it shows. The book is repetitive, leaps from one thing to another with frequent changes in perspective and views. The complexity of the subject and of the thought are captured in the writing. The virtues of cool thinking, reflection, and sustained analysis should not so readily be given up.

I first read "The Tragic Sense of Life" many years ago and came back to it after reading a book by Rabbi Joseph Soloveitchik (1903 -- 1993), an Orthodox Jewish thinker, "The Lonely Man of Faith" (1965) The Lonely Man of Faith The language, styles, and religious commitments differ sharply, but both authors explore the same basic dilemma. Soloveitchik distinguishes between two "Adams" in the Biblical creation account: the Adam of power and domination, and the Adam of loneliness in search of redemption. Lonely Adam must come to terms with the dominant Adam and pray and live with an inherent solitude in a mechanized world. Unamuno's Quixote seems to me a more dramatic figure -- a knight -- than Soloveitchik's quiet scholar but both are essentially loners. Both books are deeply individual, almost confessional. Kierkegaard is a crucial presence in both books. William James, another great writer about philosophy and religion distinguished between "tough minded" and "tender minded" religion. Both Soloveitchik and Unamuno are well on the latter side of the continuum.

The expression of angst in the works of these two differently thoughtful writers, Unamuno and Soloveitchik, resonates with many modern readers with religious interests. Rationalism, science, and thinking an issue through tend to be disvalued in both books in favor of faith. Still, there is much that may be learned from reading these books, even by readers with an unapologetically secular orientation.