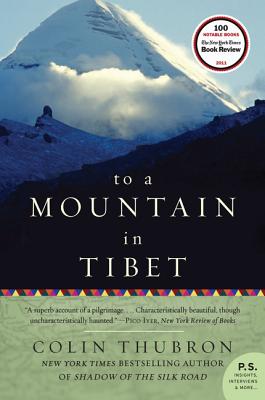 To a Mountain in Tibet

Mount Kailas is the most sacred of the world's mountains - holy to one fifth of humanity. Isolated beyond the central Himalayas, it is claimed by myth to be the source of the universe created from cosmic waters and the mind of Brahma. Its summit has never been scaled, but for centuries the mountain has been ritually circled by Hindu and Buddhist pilgrims. Colin Thubron joins these pilgrims, after an arduous trek from Nepal, through the high passes of Tibet, to the magical lakes beneath the slopes of Kailas itself. This ... Read More

Mount Kailas is the most sacred of the world's mountains - holy to one fifth of humanity. Isolated beyond the central Himalayas, it is claimed by myth to be the source of the universe created from cosmic waters and the mind of Brahma. Its summit has never been scaled, but for centuries the mountain has been ritually circled by Hindu and Buddhist pilgrims. Colin Thubron joins these pilgrims, after an arduous trek from Nepal, through the high passes of Tibet, to the magical lakes beneath the slopes of Kailas itself. This haunting and beautiful travel book links Colin Thubron's sympathetic intuition with the force and poetry of his descriptive writing. He talks to secluded villagers and to monks in their decaying monasteries; he tells the stories of exiles and of eccentric explorers from the West. Yet there is another dimension in To A Mountain in Tibet. Colin Thubron recently witnessed the death of the last of his family. He is walking on a pilgrimage of his own. His trek around the great mountain, revered by multitudinous others, awakes an inner landscape of solitude, love, grief, restoring precious fragments of his own origins. This is travel writing at its consummate best from an author of unsurpassable experience, sensitivity, and sheer lyrical power. Read Less

All Editions of To a Mountain in Tibet

Shadow of the Silk Road

The Lost Heart of Asia

Chasing the Sea: Lost Among the Ghosts of Empire in Central Asia

The Lost Heart of Asia

Circling the Sacred Mountain: A Spiritual Adventure Through the Himalayas

Located in remote southwestern Tibet on the border with Nepal, the 22,000 foot high Mount Kailas is sacred to four religions, Buddhism, Hinduism, Jainism, and the ancient Tibetan Bon. The mountain is regarded as the center of the world, and as the concrete realization of the mythical Mount Meru. The steep, forbidding mountain has never been climbed, but it has for centuries been visited by pilgrims who walk around the 32-mile base of the mountain in a journey called a kora.

In 2009, Colin Thubron, a well-known English travel writer and novelist, undertook a journey to Mount Kailas, as recounted in this new book "To a Mountain in Tibet". The title, of course, may be taken both as a reference to the journey to Mount Kalias and as a hymn to the mountain itself. I was attracted to the book by my interest in Buddhism and from an excerpt published recently in "The New York Review of Books". Raised as an Anglican, Thubron, from this book, is a secular person with no specific religious faith. He undertook the journey to reflect upon the deaths of his family members -- the recent death of his mother, an earlier death of his father, and the still earlier death of his sister, age 21, in a mountain accident. Thubron also used the journey as a means for meditation and reflection. While written by a polished writer and a professional traveler, the book has a highly personal tone.

The book is short but makes for dense, close reading. Thubron describes the physical journey to Mount Kailas and the places and persons he meets on his way in great detail. Interspersed with the story of the trip are lengthy sections of the book which describe related matters: the reflections of the author on his journey and his family, the teachings of Tibetan Buddhism, the nature of death and impermanence, the journeys earlier Westerners have made to Mount Kailas, the legends which have accumulated for centuries regarding the mountain and much more. These sections are as integral to the book as the narrative of the journey. Careful reading is required because Thubron frequently switches without warning from a story of the trip to a reflection on a closely-related personal, religious, or historical issue.

The journey begins in Nepal, as Thubron is a solitary Western traveller accompanied only by his Nepalese guide and Nepalese cook. The difficult uphill journey to the Nepalese -- Tibetan (Chinese) border occupies close to one-half the book. as Thubron passes by monasteries, simple homes and villages, and strangers on the path. Early in the book, he meets a small wandering group of passing monks about a site and asks them what it commemorates. The monks do not know. "Why would they care, who have been taught the transience of things?" Thubron asks. (p. 54) And as the monks continue on their way, Thubron wonders at them, "their lightness, their lack of need.... They have shed what others shed in dying."

Thubron's journey takes place in the Buddhist holy month of Saga Dawa, and occurs in the company of many pilgrims who have gathered to perform kora under the hostile eyes of the Chinese. At the outset of the pilgrimage, Thubron describes the beautiful, isolated Lake Mansorovar, itself a holy place, and the highest large freshwater lake in the world. The journey around Mount Kailas can be accomplished in a day and a half but sometimes takes pilgrims as long as three weeks if they prostrate extensively along the way. Thubrow describes the path, the pilgrims, the caves, byways and legends. But he describes primarily the harshness of the journey and the fortitude and commitment necessary to undertake it. The journey involves severe, endless climbs, lack of oxygen, and bitter cold. It is not a trip for the casual hiker.

Throughout the book, Thubron is moved by the religious spirit of the pilgrims to Mount Kailas who brave an arduous, sometimes fatal journey and by the teachings of Tibetan Buddhism on impermanence, change, and death. A lengthy section in the midst of Thubron's journey around the mountain describes in sharp detail the usual Tibetan burial method of sky-burial. It paints a grizzly picture. Then, towards the end of his kora, Thubron reflects upon and quotes extensively from "The Tibetan Book of the Dead", written to ease the transition period in Tibetan Buddhism between death and rebirth. The teachings of a monk named Tashi, whom Thubron had befriended in Kathamandu at the outset of his journey, come back to Thubron at the end of his kora, as they do frequently in the journey's course:

As I read this book, I longed to see Mount Kailas and to make the journey for myself. Such a trip would be an empty dream for many reasons, including physical stamina. But then I realized that the journey and its goals do not require extensive or esoteric physical travel. Thubron's book reminded me that, secular or religious, the journey is within.

Thubron is one of the great travel writers, as opposed to mere tour guides.