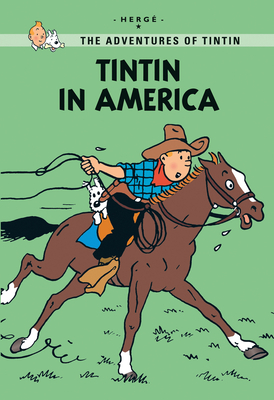 The world's most famous travelling reporter heads for America. Gangsters, Cowboys, Indians and the Big Apple await Tintin when he travels across the Atlantic to America. He soon finds himself in terrible danger - but with Snowy to help him, he faces it head on . . . Join the most iconic character in comics as he embarks on an extraordinary adventure spanning historical and political events, and thrilling mysteries. Still selling over 100,000 copies every year in the UK and having been adapted for the silver screen by Steven ... Read More

The world's most famous travelling reporter heads for America. Gangsters, Cowboys, Indians and the Big Apple await Tintin when he travels across the Atlantic to America. He soon finds himself in terrible danger - but with Snowy to help him, he faces it head on . . . Join the most iconic character in comics as he embarks on an extraordinary adventure spanning historical and political events, and thrilling mysteries. Still selling over 100,000 copies every year in the UK and having been adapted for the silver screen by Steven Spielberg and Peter Jackson in 2011. The Adventures of Tintin continue to charm more than 80 years after they first found their way into publication. Since then an estimated 230 million copies have been sold, proving that comic books have the same power to entertain children and adults in the 21st century as they did in the early 20th. Read Less

All Editions of Tintin in America

The Adventures of Tintin Volume 1

The Adventures of Tintin Volume 2

Although it begins with a precise date (1931) and location (Chicago) and features a real historical figure (Al Capone), 'Tintin In America' is Herge's tribute to the mythical America of dime novels and silent serials (especially gangster stories and Westerns). There's a real 'Perils Of Pauline' quality to Tintin's misadventures, which see the young reporter and his faithful terrier Snowy attempt to clean Chicago of gangsters, and which includes trapdoors, underground passages, falls from cliffs broken by handy branches, tetherings to railway lines etc. On their arrival, the pair are plunged into a hectic series of mishaps - they are kidnapped by a mob stooge in a steel-shuttered limousine; sawing their way out, they are met by police, and give chase; just as the nabbed hood is about to squeal, he is knocked out by a boomerang, whose owner they pursue in a gun-stuttering chase which ends in the first of many vehicular accidents. Throughout, Tintin will be gassed, dumped into Lake Michigan, shot at by a professional sniper, captured by Red Indians, have his brakeless train dynamited, and be thrown into a mincer. Welcome to America!
The simple-minded pleasures of these melodrama cliches are supplemented by a sophisticated and often quite savage critique on modern America (having tackled Bolshevik Russia in the previous adventure), an America on the brink of globalising superpowerdom, a critique that invokes the past to indict the present. The Red Indian sequence at first seems in dubious taste, with the warriors easily manipulated by a gang leader into mutilating Tintin - their knee-jerk savagery and comical rituals are the sad cliches of many a Western. But in the book's most perturbing sequence, Tintin accidentally hits oil on their land; they are speedily thrown off the reservation, and oil wells, banks and a new city erected in its place; a brilliant, shocking encapsulation of the long and terrible history that underlies bright modern America. The gangster epidemic is linked to police and presidential corruption, while the tendency of famed American democracy and justice to degenerate into mob rule and lynching is unflinchingly pinpointed, as are the ecological crimes of big business. In fact, Herge sees American capitalism as a form of cannibalism - a sausage-grinding plant is a front for disposing of gangland enemies, their flesh mingled with animal meat for sale (the leader of the gang is a dead ringer for Foucault!). Conversely, Tintin is at one point rescued by a labor strike! One frame must have registered on the young Jean-Luc Godard, in which Tintin passes a landscape of car-wreckage overlooked by advertising hoardings. The irony of the story is that America, once so new, innocent, a beacon of hope where the world's oppressed could find refuge, has become as corrupt as the Old World, to which Tintin must return ito protect HIS innocence.

Herge's satirical instinct does not preclude a great love for the LOOK of America, with its precisionist skyscraperscapes, and vast prairie spaces. Herge deliberately streamlines his animation, drawing in bold, uncluttered strokes and strong, bright colours, giving some indication of the size and modernity of America, as well as its anonymity, conformity and assembly line mentality. The nocturnal scenes, in which the overall brightness becomes deeply mysterious, are particularly beautiful. I dare anyone who views the flabbergasting scene of Tintin clambering across an endless skyscrapter not to feel dizzy. Within his frames, Herge creates an extraordinary dynamism of movement. I particularly love it when characters walk on the border of the frame, as if getting ready to leap from it.