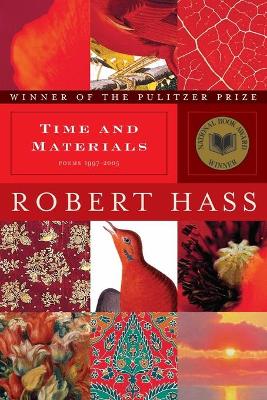 Ten years in the making, the Pulitzer Prize and National BookAward-winning "Time and Materials" is the crowning achievement of former Poet Laureate Robert Hass. Read More

Ten years in the making, the Pulitzer Prize and National BookAward-winning "Time and Materials" is the crowning achievement of former Poet Laureate Robert Hass. Read Less

A Little Book on Form: An Exploration into the Formal Imagination of Poetry

The apple trees at Olema: new and selected poems

The Shadow of Sirius

Robert Hass's first volume of poetry, Field Guide, was published by the Yale Series of Younger Poets, one of the most prestigious awards for a young poet. He has since won most of the major poetry awards as well as being appointed Poet Laureate of the United States.

In Time and Materials, Hass produces a gentle, elegiac, late music in his translations of Nobel Prize-winning poet Czeslaw Milosz and others, family poems, and poems of the Iraq War which are, as Hass has said in an interview, ?the buzz? if not their subject. At a recent reading, Hass also read raw, moving poems about the death of his brother that incorporated blues lyrics. To paraphrase one of his poems, "The old narrative is all about loss, the new narrative is loss."

There is a remarkable generosity and openness to Hass's recent work, and a globe-spanning amplitude that he shares with his mentor and friend Milosz who, Hass said, contains in his work all of twentieth-century European history. In his first book, the poet seemed to be a California regionalist, detailing his home state's flora and fauna with a naturalist's eye. On the other hand I recall the Vietnam-era poem in that first book, which closes with, ?citizens wake to murder in their moral dreams."

In the cleansing way that an articulation of grief will, Robert Hass's Time and Materials will break your heart.