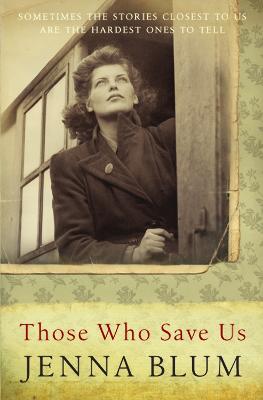 Those Who Save Us

It's 1939 and Anna Brandt is eighteen years old. Relationships between Germans and Jews are outlawed. Anna and the man she loves are committing the crime of race defilement. When Anna is forced to flee the home of her father, a Nazi sympathizer, she takes refuge in a bakery owned by a Resistance member. Soon Anna is making pastries for the officers of nearby Buchenwald while also making special deliveries,' risking death to bring bread to the camp's inmates. Then she is noticed by one of Buchenwald's highest-ranking Nazi ... Read More

It's 1939 and Anna Brandt is eighteen years old. Relationships between Germans and Jews are outlawed. Anna and the man she loves are committing the crime of race defilement. When Anna is forced to flee the home of her father, a Nazi sympathizer, she takes refuge in a bakery owned by a Resistance member. Soon Anna is making pastries for the officers of nearby Buchenwald while also making special deliveries,' risking death to bring bread to the camp's inmates. Then she is noticed by one of Buchenwald's highest-ranking Nazi officers. And everything changes. Five decades later, Anna has emigrated to Minnesota. She still refuses to speak of her wartime experiences. Anna's daughter Trudy has only one clue as to what they might have been - a family photograph featuring Anna, Trudy and the Nazi officer. Haunted by the guilt of her heritage, Trudy, now a professor of German history, begins a deeper investigation of the past and not only finds a chance for redemption but unearths the heartbreaking secret her mother has kept for fifty years. This beautifully written first novel is a profound exploration of what we endure to survive, and the legacy of shame. Read Less

All Editions of Those Who Save Us

Alone Together: Love, Grief, and Comfort in the Time of Covid-19

Woodrow on the Bench: Life Lessons from a Wise Old Dog

Learning To Be Saved

Jenna Blum's eloquent first novel "Those who Save Us", speaks with restraint and conviction about understanding one's past and moving ahead with life. The story combines wisdom and depth with good storytelling. In company with my fellow reviewers on this site, I couldn't put the book down.

The two primary characters in the book are are a German woman, Anna, whom we follow from early childhood through old age and her daughter, Trudy, shown to the reader from the earliest times of her life through what appears to be a reawakening to love and possibility as a middle-aged adult. The setting of the story alternates effectively between Anna's and Trudy's experiences during the Holocaust in Weimar, Germany and their subsequent life in Minnesota.

I find the Holocaust a difficult theme for fiction, but this book succeeds through its restaint, its unsparing portrayal of its characters, and its generally successful avoidance of cliches. Anna, the beautiful daughter of a Nazi sympathizer, initially takes a Jewish lover, who becomes the father of Trudy, and aids the resistance movement. She subsequently becomes, mostly through fear and necessity, the mistress of a high SS official at the concentration camp of Buchenwald. She marries an American soldier and moves to the United States. Trudy, her daughter becomes a professor of German history, tortured by her past and her ignorance of herself, and unable to enjoy life, particularly physical and emotional intimacy with men.

The characters in the book, from Anna and Trudy, through Anna's Jewish lover, the Nazi Obersturmfuherer, and Jack, Anna's American husband, are well-portrayed. Blum shows the dilemmas that Anna faced and that led her to accept a relationship with the Obersturmfuherer. Most of the minor characters are realistically portrayed as well. As the book moved to its conclusion, I found some of the plotting contrived. But the characterizations in the book and the struggles of Trudy and Anna were so compelling that I was not overly bothered by the machinery of the plot. I found the author conveyed a sense of life, acceptance, and of salvation in a secular context following terrible tragedy. There is a voice of hope in the book and an absence of religious or ideological preaching. Both the hope and the absence are welcome. "Those who Save us" is a moving novel.

This book was riveting. I couldn't put it down.
It was a true story through the eyes of Anna who lived it. Great read. I recommend to everyone who enjoys reading books of historical events.
The Jews, Nazis, Holocaust....all very real tragedies.

This was an excellent book telling a story about a part of history that I never knew or thought about. The author did a wonderful job of making the characters real. It was dense reading but gripping and I didn't want to put it down. On the negative side, it was quite graphic in a couple of places and difficult to get through those areas.

This novel is based on a true story, and is difficult to read because it's just a raw story, but I couldn't put it down either! A Jewish mother in Nazi Germany does what she needs to do to make sure she and her daughter survive. The adult daughter tries to figure out what happened because the mother won't open up.

A WONDERFUL STORY. I HAVE SHARED IT WITH OTHERS WHO ALSO ENJOYED IT. THANK YOU.