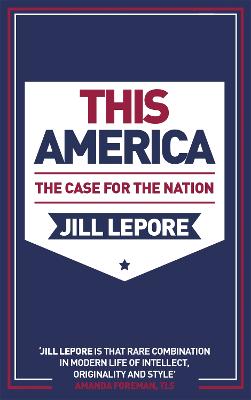 This America: The Case for the Nation

'Jill Lepore is that rare combination in modern life of intellect, originality and style' Amanda Foreman 'A thoughtful and passionate defence of her vision of American patriotism' New York Times From the acclaimed New York Times bestselling historian, Jill Lepore, comes a bold new history of nationalism, and a plan for hope in the twenty-first century. With dangerous forms of nationalism on the rise, at a time of much despair over the future of liberal democracy, Harvard historian and New Yorker writer Jill Lepore makes a ... Read More

'Jill Lepore is that rare combination in modern life of intellect, originality and style' Amanda Foreman 'A thoughtful and passionate defence of her vision of American patriotism' New York Times From the acclaimed New York Times bestselling historian, Jill Lepore, comes a bold new history of nationalism, and a plan for hope in the twenty-first century. With dangerous forms of nationalism on the rise, at a time of much despair over the future of liberal democracy, Harvard historian and New Yorker writer Jill Lepore makes a stirring case for the nation - and repudiates nationalism by explaining its long history. In part a primer on the origins of nations, The Case for the Nation explains how much of American history has been a battle between nationalism, liberal and illiberal, all the way down to the nation's latest, bitter struggles over immigration. Defending liberalism, as The Case for the Nation demonstrates, requires making the case for the nation. But American historians largely abandoned that defense in the 1960s when they stopped writing national history. By the 1980s they'd stopped studying the nation-state altogether and embraced globalism instead. When serious historians abandon the study of the nation, nationalism doesn't die. Instead, it eats liberalism. But liberalism is still in there, and The Case for the Nation is an attempt to pull it out. A manifesto for a better world, and a call for a new engagement with national narratives, The Case for the Nation reclaims the future by acknowledging the past. Read Less

All Editions of This America: The Case for the Nation

These Truths: A History of the United States

If Then: How the Simulmatics Corporation Invented the Future

The Name of War: King Philip's War and the Origins of American Identity

The Secret History of Wonder Woman

The War Before the War: Fugitive Slaves and the Struggle for America's Soul from the Revolution to the Civil War

Appomattox: Victory, Defeat, and Freedom at the End of the Civil War

Jill Lepore's Case For The Nation

The renowned historian Jill Lepore's 2018 book "These Truths" was the first single volume history in decades of the United States from Christopher Columbus' voyage in 1492 to the election to the presidency of Donald Trump in 2016. Lepore has followed-up her history with a much shorter but equally ambitious work "This America: The Case for the Nation" (2019) in which she argues for the importance of writing a broad-based national history of the type she wrote in "These Truths".

It is important to understand how Lepore's question arises. As she explains, American historians had essentially abandoned the project of writing a national history, turning instead to larger globally-based histories or to smaller-based histories of particular groups or narrower issues. Among the reasons for this shift was a strong distrust for the concept of nationalism which resulted from the terrible wars and hatreds resulting from the growth of nationalism in the 20th century. With historians moving away from thinking about the United States as a nation, Lepore argues, the way was cleared for less scholarly and thoughtful writers to appropriate a nationalistic theme for themselves. For Lepore, this result has in fact happened with unfortunate results. In "This America", more an expanded essay and a meditation than a full development of an idea, argues for the importance of thinking and writing about American nationhood.

"This America" is a fascinating, thoughtful book and a worthy successor to Lepore's "These Truths". But the book is also cluttered. It constitutes in part a short history of its own from the United States from the early days to the present focusing on the different ways Americans have understood nationhood. The book is also a historiography -- a history of the ways of writing history -- in the way American historians have approached their task beginning with George Bancroft's history written during the time of Andrew Jackson. Lepore's scope and erudition are inspiring. The treatment of many figures in the book were rushed to get to a point. I wanted to hear more about some of the ideas of the people Lepore describes before moving on. This is another way of saying that there may be more nuances to the concept of the American nation and in writing about the American nation than are explored in this short essay. And the history, historiography, and discussion of nations and states and their relationship is difficult to integrate in the brevity of the book.

Lepore finds a uniqueness and a value to the United States in the way it moved from thirteen virtually separate colonies through the formation of a confederation to the formation of a nation. She sees an America founded on Enlightenment ideals with free individuals endowed with rights irrespective of race, creed, sex or national background. America was a beacon to individuals sharing these ideals and wanting to live by them rather than a nation defined by particular religion or ethnicity and, especially, defined by the hatred of others. From the beginning, however, America fell short in many ways in living up to its commitments in its treatment of slaves, native Americans, and prospective immigrants, among other peoples. Lepore wants Americans to think of themselves as a nation and to see how we have fallen short in realizing the ideals we have professed and to work towards doing better.

As I understand her, Lepore argues for a renewed appreciation of love of country and patriotism than has been common in recent years. In short, patriotism should not be left only to the political right. Patriotism and a sense of nationhood should be based, in Lepore's account, on an understanding of the values on which the country was founded and, especially, on the ways in which the country has historically fallen well short of realizing these values. I was reminded of the philosopher Richard Rorty who made a similar point in his book "Achieving Our Country: Leftist Thought in Twentieth Century America." Rorty's politics may have been of a more left-leaning cast than Lepore's, but they share a commitment to the importance of country and patriotism.

Without taking away from Lepore's emphasis on the way the United States has fallen short of realizing its ideals, I found her understanding of approaching America as a country and of love of country were insightful and well-put. The book sometimes is too dogmatic and brisk in taking specific policy positions with which, as Lepore says at one point, reasonable persons may disagree. Still at its most important level, Lepore's book suggests the importance of Americans loving and respecting their country while working to correct its flaws and injustices.