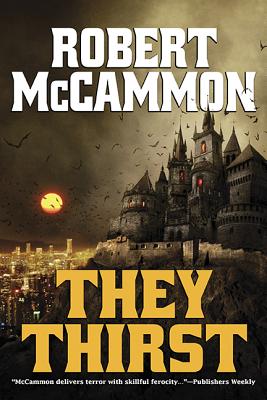 "This special signed edition is limited to 1000 numbered and 26 lettered copies. This is copy 971." Read More

"This special signed edition is limited to 1000 numbered and 26 lettered copies. This is copy 971." Read Less

All Editions of They thirst

The Queen of Bedlam

Scary as I Remember

I read "They Thirst" in the '80s and it was scary then. The vampires are more evil than Dracula and much more vicious.

The storyline was creative and as good as I remembered.

If you want a good scare I recommend this book.

"They Thirst" is Robert McCammon's foray into BIG COMMERCIAL books. With this book he attempted to write one of those blockbusters that stay on the bestsellers lists for ages and appeal to almost everyone. Although the book was not a monster bestseller, it is a well-known and popular choice for many horror fans.
Part horror story, part disaster epic, part serial killer thriller, this a hodge-podge of a book, yet a hugely entertaining one that is filled with imagination, likeable (if not very dimensional) characters and an everything-but-the kitchen sink ending. Despite the flaws (including an over the top villain) this is a fast-paced read that is sure to keep horror fans happy for a couple of days.