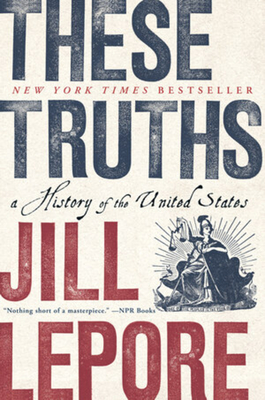 These Truths: A History of the United States

"Nothing short of a masterpiece." --NPR Books A New York Times Bestseller and a Washington Post Notable Book of the Year In the most ambitious one-volume American history in decades, award-winning historian Jill Lepore offers a magisterial account of the origins and rise of a divided nation. Read More

"Nothing short of a masterpiece." --NPR Books A New York Times Bestseller and a Washington Post Notable Book of the Year In the most ambitious one-volume American history in decades, award-winning historian Jill Lepore offers a magisterial account of the origins and rise of a divided nation. Read Less

All Editions of These Truths: A History of the United States

The Name of War: King Philip's War and the Origins of American Identity

Book of Ages: The Life and Opinions of Jane Franklin

The Secret History of Wonder Woman

This America: The Case for the Nation

Crashed: How a Decade of Financial Crises Changed the World

Sapiens: A Brief History of Humankind

Hillbilly Elegy: A Memoir of a Family and Culture in Crisis

Excellent Overview of American History Up to 1945

Shortly after I started reading this book, I thought to myself, "Here's an author who read Howard Zinn's "People's History," agreed with most of his points, but couldn't tolerate his style." That pretty much sums up the book. It's largely about the oppression of women and African Americans, which is to say that for the most part, it's an accurate history and worth reading.

What it doesn't do well is address the last half of the twentieth century. After WWII, the US was a hegemon. You can't write about American history without addressing the US's effect on the rest of the world; virtually all of the rest of the world. Zinn does a creditable job of this, Lepore doesn't bother.

Also, although it's a feminist history, it has at least one curious lapse. Zinn devotes a full page to Bill Clinton's destruction of Aid for Dependent Children (AFDC). Briefly, Clinton eliminated a program that helped poor children and replaced it with a program that punished single mothers. Lepore gives this event a single sentence.

I can recommend the first 3/4 of this book, that is, up to the end of WWII. For American history since that time you have to look elsewhere, and Zinn is a good place to start.

At almost 800 pages of text, Jill Lepore's book "These Truths: A History of the United States" (2018) is both forbiddingly long and yet also short for its ambitious scope. Lepore covers the United States's long past beginning with Christopher Columbus in 1492 and concluding with the election of Donald Trump to the presidency in 2016. It is a great deal to cover, and Lepore, a Professor of American History at Harvard and a staff writer for the New Yorker, is the first historian to undertake such a large project for many years.

In her Introduction, "The Question Stated", Lepore sets forth the purpose of her book. She begins with a question Alexander Hamilton posed in the "Federalist" about the American experiment in constitutional government and whether it would succeed. Hamilton had asked "whether societies of men are really capable or not of establishing good government from reflection and choice, or whether they are forever destined to depend for their political constitutions on accident and force."

Lepore proceeds to discuss how the American experiment rests on three political ideas stated by Thomas Jefferson in the Declaration of Independence: political equality, natural rights, and the sovereignty of the people. Lepore wants to develop her American history to show the development and fate of these ideas over time: how these ideas have been understood and the extent to which the United States has been able to remain faithful to them. Lepore argues that, in its written constitution, the United States indeed brought something new into the world's political realm with the ideal of basing government on knowledge, facts, and truth rather than upon mystery or force. Her book reflects upon the success of this attempt. Lepore argues for the importance of a close study of history in understanding the United States and she also argues for the importance of civics -- Americans have forgotten the underlying principles of their government and need to recover and think about them. Her book makes an important and highly worthwhile effort in this direction.

It is important to keep Lepore's purpose in mind because it is easy to lose track of it in the course of her long, wandering book. Her book is not a traditional narrative history of dates, sequences of events and facts. Much that a reader might expect to see is not covered or covered only briefly while Lepore includes a great deal of detail and discussion not found in other histories. Throughout the work, Lepore juxtaposes ideals with realities. From the outset, she shows the incongruity between the American ideas of equality, natural rights, and sovereignty on the one hand and the institution of slavery on the other hand. The theme of slavery and discrimination against African Americans pervades her study. Her aim is to show that African Americans have been part of the American experience from the outset and that their story and role deserves to be studied.

Lepore gives similar attention to women. She argues that women were excluded from the compact made by the Constitution and she argues throughout the book for the attempts of women to find equality and their place in American political life from colonial times to current day feminism. Other groups treated as having their place in the American experience include immigrants and Native Americans. Throughout the book the stories of African Americans, women, immigrants, and Native Americans are threaded into the broader narrative.

Then too, there is a near-philosophical discussion of the nature of truth throughout the book. She begins with the Enlightenment and Locke and the world of knowledge, evidence and fact as central to the understanding of truth on which the American form of government was based. Throughout the book she discusses challenges to the Enlightenment idea of truth. Some of these challenges come from post-modernism and relativism. But what Lepore mostly has in mind is propaganda and challenges to finding truth in various forms from pollsters to advertising to the Internet. The book evidences a deep skepticism about how people may and have been led astray through media and have surrendered or been deprived of the opportunity to think things through rationally.

Lepore's book is in four large sections: "The Idea" covering 1492 -- 1799, "The People" covering 1800 -1865, "The State", covering 1866-1945, and "The Machine" covering 1946-2016. In terms of space, recent American history and current events probably receive the largest share of attention: Lepore's book is geared, for better or worse, to current issues. Figures and issues that will be familiar to most readers are included in each section together with individuals and themes that often are not addressed. For example, in the latter parts of the book, Lepore gives sustained attention to advertising agencies and to the roles they assumed in supporting candidates and issues. She discusses the role of advertising and marketeers in defeating Federal health care plans from the time of the presidency of Harry Truman.

The book shows the conflict that Americans have had with what Lincoln described in his First Inaugural Address as the "better angels of our nature". There is much to praise in Lepore's account but, alas, probably even more to criticize. Lepore makes no secret of her own liberal convictions, as liberalism developed in the century from the Civil War through the mid-1960s. She spends a great deal of time discussing the deterioration of the American experiment in subsequent years. She is critical of much in the rise of conservatism but she is critical as well of the rise of identity politics and ideological rigidity on the left. Overall, the book paints a bleak picture but one not without hope. The book shows how Americans have fought with each other and endured harsh times throughout their history. Situations that look difficult may be righted with time and effort.

There are many telling anecdotes and stories in Lepore's book that will speak to individual readers. Thus, in a discussion of the alleged conformity and tediousness of American business life in the 1950s, Lepore quotes the sociologist C. Wright Mills' book, "White Collar". Mills, in turn wrote, that the conformity of American life reminded him of a passage that Herman Melville wrote in 1855: "At rows if blank-looking counters sat rows of blank-looking girls, with blank, white folders in their blank hands, all blankly folding blank paper." The quotation is from a little-read Melville story, "The Paradise of Bachelors and the Tartarus of Maids". It was effective to see Lepore make her point through C. Wright Mills and then back to Melville.

Lepore's history is a work of ideas more than a book of specific facts. Portions of the book tend to wander and to feel disjointed. I thought sometimes Lepore was too fast with her own judgments while at other times what she had to say was nuanced and thoughtful. I found myself irritated at times in reading this long book but just as often I found myself learning from what Lepore had to say. One of the lessons of the American experiment and of Lepore's book is that there is often much to be learned from positions with which one disagrees.

"These Truths" is an excellent broad-based look at the American experiment in terms of history, civics, and philosophy. It is worth the effort to read this book and to think through for oneself the issues Lepore raises.

A history of the ideas that shape America today

This is not a history of presidents and wars. It is a history of the different and often opposing truths that made America what it is today; of ideas that have their origins in our distant past that we are still trying to resolve, and which still divide us. Today's controversies are not new. They are old ones dressed up in new clothes. These Truths explains it all.