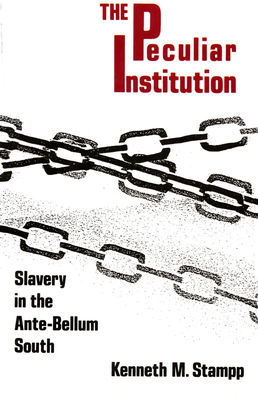 The peculiar institution: slavery in the ante-bellum South

The Imperiled Union: Essays on the Background of the Civil War

Reconstruction; An Anthology of Revisionist Writings,

Slavery: A Problem in American Institutional and Intellectual Life

Roll, Jordan, roll : the world the slaves made

A Classic Study Of The American Tragedy

Professor Kenneth Stampp's book on American Slavery was published in 1956-- two years after the Supreme Court's decision in Brown v Board of Education and at the beginning of the American Civil Rights Movement. At the time of its publication, the book was recognized as a seminal study of America's "peculiar institution". Time has not changed the value of the book.

The book attacks a picture of the Old South that attained wide currency after Reconstruction and was carried through American culture in works such as, for example, Gone With the Wind-- that plantation slavery was a benign institution, part of an agrarian way of life, that was accepted by both slave and master. Professor Stampp shows that slavery had an economic, commercial basis, that it was resisted by slaves overtly and covertly, and that led to squalor, cruelty and suffering by the slaves. The peculiar institution does not merit sentimentality in any form.

In reading the book a half-century after its publication, and with some benefit of having read subsequent studies, I was struck with the moderate tone of the book. Yes, there were humane masters in an inhumane system and yes, there were variants in time and place. Stampp gives these variants their due, perhaps more than modern students would be inclined to do.

I was stuck with the tone of slavery's defenders, pre Civil War and thereafter, describing the institution as "patriarchal". Not only is that description in error, as Stampp shows, but for readers in a time beyond the mid 1950s, it is hardly a compliment to call a society "patriarchal", even if it deserved this characterization.

There has been a great deal of writing since the publication of this book on matters such as the nature of the slave trade, the presence, or lack of it, of an indigenous culture among the slaves, and the economic viability of slavery. These studies add to the picture that Professor Stampp has drawn.
This is an essential book for the understanding of our Nation's history. Those looking for an introduction to the Ante-Bellum South could not do better than to read this book.

When Professor Stampp wrote this book in the 1950's, he changed how Americans viewed the institution of slavery in the South. It is a must reading for anyone interest in the American South and slavery in the years just prior to the Civil War.