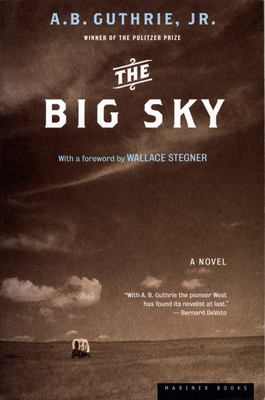 Originally published more than fifty years ago, THE BIG SKY is the first of A. B. Guthrie, Jr.'s, epic adventure novels of America's vast frontier. THE BIG SKY introduces Boone Caudill, Jim Deakins, and Dick Summers, three of the most memorable characters in Western American literature. Traveling the Missouri River from St. Louis to the Rockies, these frontiersmen live as trappers, traders, guides, and explorers. The story centers on Caudill, a young Kentuckian driven by a raging hunger for life and a longing for the blue ... Read More

Originally published more than fifty years ago, THE BIG SKY is the first of A. B. Guthrie, Jr.'s, epic adventure novels of America's vast frontier. THE BIG SKY introduces Boone Caudill, Jim Deakins, and Dick Summers, three of the most memorable characters in Western American literature. Traveling the Missouri River from St. Louis to the Rockies, these frontiersmen live as trappers, traders, guides, and explorers. The story centers on Caudill, a young Kentuckian driven by a raging hunger for life and a longing for the blue sky and brown earth of big, wild places. Caught up in the freedom and savagery of the wilderness, Caudill becomes an untamed mountain man, whom only the beautiful daughter of a Blackfoot chief dares to love. With THE BIG SKY, Guthrie gives us an unforgettable portrait of a spacious land and a unique way of life. Read Less

All Editions of The big sky

The Big It, and Other Stories

Across the Wide Missouri

Loneliness And Freedom In The Old West

The genre of the American Western has had a long history through dime and pulp novels and magazines, radio, television, and film, and novels and stories. Although much of the genre deals in stereotypes, many Westerns are thoughtful and imaginative, including A.B. Guthrie's 1947 novel, "The Big Sky". Guthrie (1901 -- 1991) wrote a series of six novels on the settlement of the Montana territory of which "The Big Sky" is the first chronologically and in the order of writing. It is a many-layered work in its themes and characterizations. The book cuts against many stereotypes of the West; and it cuts as well against current standards and thinking, both those of today and, to a degree, those when the book was written. Today's readers will want to reject the racist language of the book, most of which is in dialogue sections. There is much to be thought about and enjoyed in this book which will challenge and inspire a sympathetic reader.

"The Big Sky" is set between 1830 -- 1843 in Kentucky, Indiana, and Missouri, along the Missouri River, and particularly in the early Montana territory. The primary character, Boone Caudill, receives a complex portrayal as both anti-hero and hero. At the age of 17, Boone runs away from his poor farming family and from his abusive father to seek a life of freedom as a trapper in the West. Boone is a violent, unsociable loner and killer. He is portrayed realistically and sharply and in many sections of the book it is difficult to feel sympathy for him. Yet, Boone also is shown as living his own life and pursuing his dreams within his own lights in a manner given to few people.

The other two major characters in the book are also mountain men. Jim Deakins, in his mid-20s, is good-natured and reflective. He becomes Boone's companion early in the story as the two head for the West. Dick Summers, a middle-aged mountain man, serves as mentor to Caudill and Deakins. Summers has had extensive experience in the West but he also has a stake in a more conventional society in his attitude and in his ownership of a small Missouri farm. The book follows the adventures and changing fortunes of Caudill, Deakins, and Summers, as they journey 2000 miles on the Missouri River on a keelboat and as they pursue the wild life of freedom in the Montana territory.

The novel is stunning in its descriptions of the river and of the large lonely places, mountains, wildlife, and seasons of the West. The book is realistic in that the author makes clear the anti-social, to say the least, characters of the individuals who would choose to pursue and who excel in such a life. The characters are violent and mean in many respects and their life is hard, fragmented and lonely. The book offers an extended and on the whole sympathetic portrayal of the Indian tribes and of their battle with the weapons of the white settlers and with their illnesses of smallpox, alcoholism, and venereal disease. The primary Indian character is a beautiful young woman, Teal Eye, with whom Boone falls in love.

With its violence and realism, "The Big Sky" is still strongly romantic. The author is clearly in love with place and has a nostalgia for a wildness which even in the late 1830s was fast disappearing. He also shares a love for his characters and for their quest for freedom which he contrasts with the life of suits and ties in jobs which lack feeling and in lives which lack passion. In many ways, the book is with Boone and his companions while recognizing their large weaknesses. In addition to its elements as a history, the book is a reflection on the nature of certain concepts of freedom and individualism which still retain their power to move people's minds and hearts. To my mind, the book probes these questions more convincingly than some more modern, much praised novels such as Jonathan Franzen's "Freedom". The book also includes a great deal of theological reflection offered by Jim Deakins which fits in well and enhances the context of this story of the old West and of freedom. The predominant tone is of secularism and humanism. "The Big Sky" is a thoughtful book as well as a yarn, a character study, and a history.

Contemporary readers will struggle with the racist language of this book and with its ideas of freedom, individuality and sex which probably will not be entirely their own. It is a virtue in a book to make the reader think and to see different perspectives, whether the perspectives come from the past or from the future. I enjoyed this Western with the grandeur of its portrait of the West and with its portrayals of a rare, flawed and wild way of life. This is a book for reflective readers of American literature and for lovers of the West.

AS WITH ALL GUTHRIE BOOKS THEY ARE WELL WRITTEN. I PLAN ON READING MORE.

This book covers a time that was disappearing even in the late 1800's.

A.B. Guthrie?s ?Big Sky? was a wonderful work. I had read his prize-winning novel ?The Way West? previously and found ?The Big Sky? to be even better in some ways. It was a moody piece and I began to wonder how much sadness and alienation one could bear with. I didn?t find myself thinking of these mountain men, or Boone Caudill, as heroes. They came across more as almost psychopathically anti-social and terribly self-indulgent. But nevertheless it was a gut wrenching read. Guthrie gave a good feel for the period and cultures involved.

The Best of the West

This book is a classic of the genre - with good reason. For an enthralling account of the mountain men in the Rockies, one cannot do better.