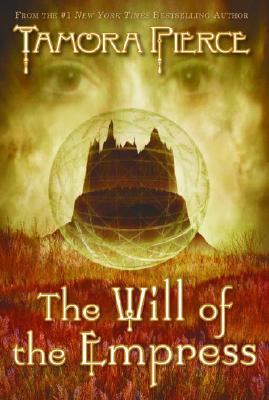 The Will of the Empress

The four mages, Tris, Sandry, Briar and Daja are now young adults and are back together after their years of independence, but their old bond is broken. Travelling together to the kingdom of Namorn they do battle with the Namorese mages, reforging old connection under dramatic circumstances. This book is the final instalment of the "Magic Circle". Read More

The four mages, Tris, Sandry, Briar and Daja are now young adults and are back together after their years of independence, but their old bond is broken. Travelling together to the kingdom of Namorn they do battle with the Namorese mages, reforging old connection under dramatic circumstances. This book is the final instalment of the "Magic Circle". Read Less

All Editions of The Will of the Empress

In the Hand of the Goddess

A gritty and complex world for the Circle

For a series about which I initially felt unenthusiastic, this is a pretty amazing turnaround. While the first quartet felt like it aimed too young, the second quartet began to address that issue and add some deeper issues to the fold. With "The Will of the Empress," which I hope is the first of a third quartet, Pierce acknowledges that the young readers who started with "Sandry's Book" have grown up to become young adults, and may wish to see these characters encounter the more complex adult world. Indeed, politics of all kinds abound in this book. All four of these young mages have experienced trials and horrors during their time apart, and it leads them to remain closed to each other upon their reunion. Aside from a natural adult need for privacy, none of them are sure of what the others' reactions will be to the experiences they've had.
The plot revolves around Sandry's dual inheritance; her father was from Emelan, where she has lived most of her life as her Uncle's adviser and possible successor. However, her mother was a wealthy landholder and heiress in the Empire of Namorn, and the Empress of that land is beginning to press taxes upon Sandry's estate in order to get her young cousin to return to her mother's homeland and therefore keep that wealth within the borders of Namorn. It's all very political and even slightly humdrum, which I intend as a compliment. The Empress, while serving as the antagonist, is not evil. She is merely the head of state, and she behaves accordingly for the advancement of her power and the economic prospects of her country. The drama of the story is between the characters. They have grown up and gone through the largest part of their adolescence separately, and no longer have the easy camaraderie of their youth.
I found this book to have a great deal of honesty about the interactions of young adults, and the plot is quite intricately put together. Namorn is a veritable basket of thorns, and the solution of how to extricate themselves is not a simple one. I will probably buy this book. I recommend others do the same.

I had very high hopes for this book. It was terrible. Briar is obnoxious. Everything with Daja was just plain disturbing. The book is too long, too boring, and the characters were just plain terrible. It was a horrible waste of time, and I was so disappointed. I can't think of anything good to say... sorry Pierce.