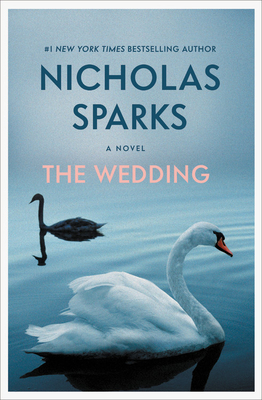 After more than 20 years of marriage, Wilson Lewis, son-in-law of Allie and Noah Calhoun (of THE NOTEBOOK) is forced to admit that the romance has gone out of his marriage. Desperate to win back his wife Jane's heart, he must figure out how to make her fall in love with him...again. Despite the shining example of Allie and Noah's marriage, Wilson is himself a man unable to easily express his emotions. A successful tax attorney, he has provided well for his family, but now, with his daughter's upcoming wedding and an ... Read More

After more than 20 years of marriage, Wilson Lewis, son-in-law of Allie and Noah Calhoun (of THE NOTEBOOK) is forced to admit that the romance has gone out of his marriage. Desperate to win back his wife Jane's heart, he must figure out how to make her fall in love with him...again. Despite the shining example of Allie and Noah's marriage, Wilson is himself a man unable to easily express his emotions. A successful tax attorney, he has provided well for his family, but now, with his daughter's upcoming wedding and an impending empty nest, he is forced to face the fact that he and Jane have grown apart and he wonders if she even loves him anymore. Wilson is sure of one thing - his love for his wife has only deepened and intensified over the years. Now, with the memories of his in-laws' magnificent fifty-year love affair as his guide, Wilson struggles to find his own way back into the heart of the woman he adores. Read Less

All Editions of The Wedding

A Bend in the Road

Wonder story of a marriage recaptured

The book was amazingly touching, this story follows the Notebook in a beautiful way! I would highly recommend it to all!!

Perfect for a summer, light yet profound read

I'm a big Nicholas Sparks fan, so I may be somewhat biased as I review this book. THE WEDDING is the sequel to THE NOTEBOOK, the love story of Noah and Allie: a love that almost didn't happen. Now, in THE WEDDING, we meet the next two generations of family members, and a somewhat complex story is told.

Noah is now living at Creekside, where he and Allie had moved toward the end of her life. He spends his time feeding a lone female swan, distinguished by a dark patch of color on her chest. Noah feels that this is Allie come back to him, and his children feel that he's lost touch with the world. Noah, however, never gives up on his theory and insists that it is his dear beloved wife.

Noah and Allie's oldest daughter, Jane, is married to Wilson Lewis. They've been married for nearly 30 years and have raised three children, all of whom are now adults. Jane and Wilson's story is told in flashbacks, as Wilson remembers what brought him and Jane together all those years ago. The reason for his reflections, though, is that he knows Jane is very unhappy with their marriage. So unhappy, that she leaves town for a few weeks to spend with their son Joseph. She doesn't say exactly why she left, but Wilson knows she needs to get away to think things over.

In the meantime, their oldest daughter Anna has announced that she and her boyfriend Keith plan to be married in a few weeks. She doesn't want anything fancy, and plans to marry at the justice of the peace. However, this is not what Jane wants for her daughter. Suddenly, Jane shows a new interest in life, and with the help of Wilson the two of them proceed to organize the best wedding any daughter ever had.

As the wedding plans take shape, Wilson keeps Noah up to date. During their visits, Wilson notes how Noah dotes on the swan, talking to her and sharing his thoughts with her. A few odd events almost convince Wilson that maybe this is indeed Allie reborn, but he always keeps these thoughts to himself. And all through these visits, Noah reminisces about his wife, while Wilson remembers his own first love Jane.

The title THE WEDDING is misleading, but this was Sparks' intention. Yes, the entire book is about the family getting ready for the big wedding, but the reader will realize by the end of the book that the story is much more than just THE WEDDING. The ending will surprise you, as it surprised some of the characters in the book. The story of the swan helps round out this tale of eternal love and may turn even the most cynical of persons into a romantic.

Although this book doesn't have a complicated story line or much action (it is a romance, afterall), I ended up being pleasantly surprised by it in the end.
Jane, the daughter of Noah and Allie from The Notebook, and her husband, Wilson, are called upon to help plan their daughter's hasty wedding, which happens to coincide with their 30th anniversary.
Unfortunately, he had forgotten their 29th anniversary and he realized then, that he had been taking his marriage for granted. He sets out to make his wife fall in love with him again.
It's a simple plot, and yet, it's not simplistic. Over such a long period of time, habits become ingrained. It's not easy to change. The fact that Wilson is shown to work at it over the space of a year shows he's serious, and that he doesn't believe his years of neglect can be atoned for by one romantic date or expensive gift.
Like most of Sparks' books, he asks a question at the beginning, that is answered by the end of the book. He uses humour well, and he has interesting insights into the real issues of being married for a long time.
Men don't have to understand women, but they do need to know their own wives. A lifetime of study should give him enough information to know how to make her happy.
This story ended satisfactorily, with Wilson giving Jane something she's always wanted.
I thought I saw it coming, but it had a slight twist that made it even better.

This book suggests that life changes can be made at the most surprising times. New characters keep the memories of "The Notebook" characters alive in this book. A very endearing read.

the power of love

It tells us a normal story, but with beautiful language, deep feelings and unique insight. Love, is treasure that can not buy by money. In our real life, we usually ignore the importance of love. Only when we lose it, do we realize its importance, and regret what we did. In this novel, Nichlas Sparks gave Wilson a chance to rescue his love, and also gives us an alarm and hope. Strongly recommend!