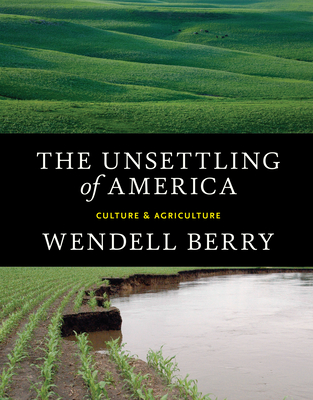 The Unsettling of America: Culture & Agriculture

Berry's assessment of modern agriculture and its relationship to American culture--our health, economy, personal relationships, morals, and spiritual values--is more timely than ever. This new edition of Berry's work presents a a classic testament to the value of the American family farm. Read More

Berry's assessment of modern agriculture and its relationship to American culture--our health, economy, personal relationships, morals, and spiritual values--is more timely than ever. This new edition of Berry's work presents a a classic testament to the value of the American family farm. Read Less

All Editions of The Unsettling of America: Culture & Agriculture

What Are People For?: Essays

Becoming Native to This Place

The Soil and Health: A Study of Organic Agriculture

What Are People For?: Essays

The Gift of Good Land: Further Essays Cultural and Agricultural

An argument for nostalgic way of life

About 50 percent of the time I found myself agreeing with Wendell Berry. The other 50 percent I was convinced this man was completely off his rocker. Berry takes into consideration various sources of information to make his point that farms, that is farms that don't use modern technology in terms of machinery, pesticides, chemical fertilizers, etc. are good.

Berry's got a hard-on for farming. Any other way of life is somehow pitiful in his estimation. It's a romantic idea, but it's not realistic. Old fashioned farming is nice, but it's not the end all be all. It's not the pinnacle of human existence. I get the feeling that Berry has a nostalgic love for farming based on boyhood memories and wants that old farming way of life to continue. He wants us to go back to the way things used to be. The problem with this line of thinking is where does one stop in this trip back through time. Farming after all is not natural. Human beings started out as hunter gatherers and farming itself, no matter how practical we may see it, does go against nature.

Berry weighs in on anything and everything from birth control to suicide and seems to genuinely believe that all of it would be unnecessary if people just stopped using those dang tractors. Some of the examples that he calls upon are bizarre. Shakespeare's King Lear is used to promote a simple agrarian lifestyle. Thomas Jefferson is held up as an example of a man who did not use machines on his farm, conveniently left out is the fact that the man did use people (the slaves he owned) as machines on it. When writing in favor of the use of draft horses on the modern farm, Berry quotes extensively from a publication called the Draft Horse Quarterly, who judging by the title of their publication might have a vested interest in the whole draft horse as farm workers thing. I would have appreciated a quote or two from a less partial source.

Berry holds up the Amish as a human ideal, but it's hard to see people who are opposed to anything beyond an eighth grade education as ideal. In one section Berry comes up with a list of 8 falsehoods promoted by love songs which he feels lead people unwittingly into marriage. I have a hard time conceiving of anyone who takes a love song as proved fact. Perhaps his undereducated friends in the Amish community, although from what I understand they do not listen to this sort of music.

Despite all my complaining, I do agree with a lot of the things Berry says. Organic farming is very important. Factory farming is a nightmare that could lead to huge problems down the road. Still, I don't know that one has to shun all technology to have a sustainable organic farm. Then again, I don't really have any romantic notions about farms. If it worked out to be healthier for us to grow all our food in greenhouses that were staffed by a bunch of robots, well then I would have no problem accepting that.

Berry, on the other hand, is writing about a bygone way of life that he longs to bring back, and he tries to use everything from suicide rates to the environment to make it clear why we should do so.