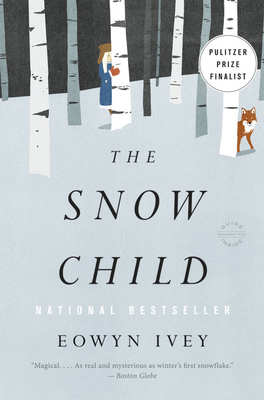 "Alaska, 1920: a brutal place to homestead, and especially tough for recent arrivals Jack and Mabel. Childless, they are drifting apart--he breaking under the weight of the work of the farm; she crumbling from loneliness and despair. In a moment of levity during the season's first snowfall, they build a child out of snow. The next morning the snow child is gone--but they glimpse a young, blonde-haired girl running through the trees"--Provided by publisher. Read More

"Alaska, 1920: a brutal place to homestead, and especially tough for recent arrivals Jack and Mabel. Childless, they are drifting apart--he breaking under the weight of the work of the farm; she crumbling from loneliness and despair. In a moment of levity during the season's first snowfall, they build a child out of snow. The next morning the snow child is gone--but they glimpse a young, blonde-haired girl running through the trees"--Provided by publisher. Read Less

All Editions of The Snow Child

To the Bright Edge of the World

The Snow Child: The Richard and Judy Bestseller

The Language of Flowers

In 1920, Jack and Mabel move to Alaska to get away from their old lives and the pain of losing a child at birth. But homesteading in Alaska proves to be back-breaking work and a hard life. Mabel feels alone, isolated and empty. And Jack feels used up and like a failure because the farm just isn't making enough money. Then one year, the first snow of the cold season is magical.....they laugh like old times, have a snow ball fight and build a snowman. A snowgirl actually....decorated with Mabel's mittens and a scarf. The next morning Jack finds the snowman crumpled to the ground and sees a strange, blond child running through the trees at the edge of the woods. The girl is usually accompanied by a red fox and calls herself Faina. Meeting and loving Faina will change all of their lives.

This is a wonderful re-telling of a Russian fairy tale. Life in the wilderness is harsh and unforgiving, yet beautiful. There is joy and sorrow in this story.....very much like real life. It was wonderful watching Jack and Mabel's lives transform and grow stronger as they learned how to live in Alaska. Mabel works with her hands in the fields and learns so much about her husband and how he feels after a day's hard work, the stress he faces and the joy. Jack comes to better appreciate and understand his wife. And Faina fills a hole in their life that has been painful for both of them for years. But she is a free spirit,and nobody can contain her.

Beautiful bittersweet story! The Snow Child was Eowyn Ivey's first book. I definitely want to read more of her writing!

A Snow Child In Alaska

Eowyn Ivey's first novel "The Snow Child" (2012) tells the story of hardy settlers in the territory of Alaska in 1920 leavened with an adaptation of an old Russian fairy tell about a snow man that comes to life. The book explores the wildness of Alaska, the bitter winters, short summers, the rivers, mountains, and wild animals. It explores some of the reasons that motivated Americans to leave their lives in the lower 48 states to try their hand at a difficult new life. The story explores that independence and individualism of the settlers while also showing their efforts at community-building, cooperation, and friendship. The book captures something ethereal, wild, and mystical about the territory in the person of Faina, the snow girl.

The primary characters in the book are Jack and Mabel, in their early 50s, who have left their Pennsylvania home in search of a new life largely because they have no children. Jack and Mabel had different backgrounds. Jack had been a farmer with his family while Mabel was the educated and refined daughter of a professor of literature at the University of Pennsylvania. The couple is haunted by a child they lost at birth. They struggle in their early years as Alaska homesteaders with the hard winter and Mabel contemplates suicide. The couple slowly become friends with another immigrant family, George and Esther Benson, and their three sons, with the youngest, Garrett, 13, playing the most significant role in the story. Much of the realistic portion of the book is about the importance of friendship and working together in order to survive. The book turns to myth in a mysterious young girl, Faina, who lives in the woods and snow by herself but who gradually befriends Jack and Mabel. Faina disappears during the Spring. Much of the book describes the fondness Jack and Mabel develop towards this little winter sprite and about whether she is real or imaginary. Regardless, there is something undeniably preternatural about Faina.

The characters in the book are believable and poignant as the story explores loneliness, the search for love, difficulties in marriage, and setting out for something new. It also plays on themes of wildness -- in terms of Alaska's weather, topography violence, and emptiness and conventionality and settlement, in the life of the pioneers to tame the land and make a success of farming. The story is taken out of the realm of the everyday with the figure of Faina. Romance, mystery, and fate lie at the heart of things, certainly in this novel. Besides the adaptation of a Russian story, I was reminded of a work from a much different milieu -- Truman Capote's urbane little novel "Breakfast at Tiffany's" with its romance and its admonition to "never love a wild thing." America, not only the former territory of Alaska, is a mix of the real and ideal, the pedestrian and the mysterious.

Ivey writes in a simple style which for the most part is effective. The book seems to me overly long and it lags in places. But it does many things well, including the scenes of the wilderness, the young snow girl, and the near-estranged couple that manage to find a bittersweet redemption in the sparsely settled territory. In addition to the folktale like quality of much of the book, I enjoyed how the author was kind to place and characters. The book shows a love of wildness, a love of Alaska as territory and presumably as state, and a sense of people working together while preserving their autonomy. The affection and spirit of the book are inspiring given the polarization which plagues our country.

"The Snow Child" is a touching, poignant book about loneliness and mystery and about one way of pursuing and living out the American dream.

This book was recommended by a friend. Second
book based on her reads. I trust her judgment
1000%

A simple way of re-doing an old story. Having experienced land clearance I found this aspect oif it rather implausible, however I enjoyed it.