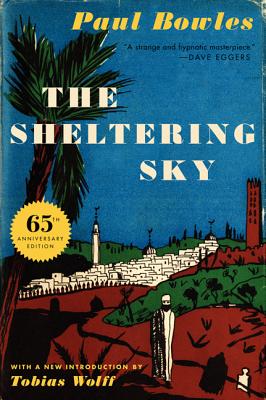 'The Sheltering Sky is a book about people on the edge of an alien space; somewhere where, curiously, they are never alone' Michael Hoffman. Port and Kit Moresbury, a sophisticated American couple, are finding it more than a little difficult to live with each other. Endeavouring to escape this predicament, they set off for North Africa intending to travel through Algeria - uncertain of exactly where they are heading, but determined to leave the modern world behind. The results of this casually taken decision are both tragic ... Read More

'The Sheltering Sky is a book about people on the edge of an alien space; somewhere where, curiously, they are never alone' Michael Hoffman. Port and Kit Moresbury, a sophisticated American couple, are finding it more than a little difficult to live with each other. Endeavouring to escape this predicament, they set off for North Africa intending to travel through Algeria - uncertain of exactly where they are heading, but determined to leave the modern world behind. The results of this casually taken decision are both tragic and compelling. Read Less

All Editions of The Sheltering Sky

Let It Come Down

The Stories of Paul Bowles

The Heart Is a Lonely Hunter

The Stories of Paul Bowles

Let It Come Down

Paul Bowles (1910 -- 1999) was an American outsider. He first attained success as a composer but in 1949 left the United States for Tangiers and pursued a career as a writer. Bowles remained an expatriate for the rest of his long life, due in part to his unusual sexual lifestyle. Bowles published his first novel, "The Sheltering Sky" (1949) soon thereafter, and it became a financial and critical success. Bernardo Bertolucci made a film of the movie in 1990. I first read the book in 2005. I loved the book then even while missing a good deal. It is a book that will reward several rereadings.

Bowles' novel has many influences including existentialism, Fitzgerald, Conrad, and Malcolm Lowry. The book also shows the influence of American popular culture and its shows and songs about the exoticism of Arabia. But the character of this bleak novel is all its own.

The novel is set in French North Africa following the end of WW II. An American couple, Port(er) and Kit Moresby, travel to North Africa without fully understanding why. Port and Kit are New York intellectuals, and they, again, inexplicably, bring with them as a travelling companion a slightly younger man, Tunner, a journalist. Port and Kit have hopes of reviving their passionless, troubled marriage.

As the story unfolds, Port and Kit move from one small town in the desert to others, progressively shabbier and more threatening. Their behavior also becomes increasingly self-destructive. The couple are lost, alienated and alone in an unforgivingly hostile environment which they do not understand.

The book is tautly and densely written. Many of the scenes are small closely developed vignettes. The plot of the book is central but the setting and atmosphere are equally so. The book includes long descriptive passages of the desert, of its small towns, shabby hotels, buses, brothels, and markets. The primary characters are only elliptically and partially developed to keep a focus on fate and on the enveloping deterioration. But many characters in the book are vividly portrayed including the Lyles, an odious English couple, two French Army officers, a member of the American consulate, and a small Jewish merchant, Davoud Zoozeph who is perhaps the only sympathetic character in the novel. The Sahara Desert, its environs, and the brooding sky are the chief protagonists in the book.

The book is a mixture of exoticism and philosophy. It develops slowly and demands careful reading. In an early review, Bowles' friend Tennessee Williams described the novel as "An Allegory of Man and his Sahara." Williams wrote:

"There is a curiously double level to this novel. The surface is enthralling as narrative. It is impressive as writing. But above that surface is the aura that I spoke of, intangible and powerful, bringing to mind one of those clouds that you have seen in summer, close to the horizon and dark in color and now and then silently pulsing with interior flashes of fire. And that is the surface of the novel that has filled me with such excitement."

Director Bernardo Bertolucci described the novel as "full of poison on every page" while other critics have aptly seen the description of the desert as "alien but also spiritual" and the actions of the characters as "shocking" and "self-destructive." "The Sheltering Sky" is a remarkable, brooding novel that grew with me over the years and on a second reading.

An Interesting Look at Love and Mental Illness

A tough book to follow.....but worth it... and an interesting perspective as to what really makes up a relationship.
Be prepared for what you will find.
Danny G.in Charleston,SC

This book sticks with you for a long time after you've put it back on the shelf.

Port and Kit are a bored married couple, travelling and looking to rekindle their earlier romance. They've brought their friend Tunner along, a seemingly strange choice for a romantic getaway. The strangest choice is that their getaway is to the wild deserts of North Africa - no map, no travel itinerary, no vaccinations. Even more foolishly, they trust every random stranger they meet along the way.

Of course, unpleasant things happen to them.

As Tennessee Williams points out in the introduction, this novel is much more about atmosphere and cultural awareness than it is about character or plot. We are led to believe that the protagonist is a lonely, repressed man travelling with his ebullient wife in North Africa. However, partway through the book, his wife takes center stage.
Bowles is able to articulate, through sparse language and a detailed landscape, what it means for Euro-Americans to encounter a North African culture in a post-colonial era. Rather than situate Muslims or Arabs in a "heart of darkness" atmosphere of fear, he infuses them with mystery, assuredness, and self-confidence. It's the white ex-patriots that struggle to feel genuinely, experience intimacy, and lose their self-consciousness in their escape from WWII's devastation.
The brilliant title, the "sheltering sky" refers to the feeling the displaced wanderers have that the sky is a mere veil separating them from the horrid, desolate frontier of space. It functions as a fitting metaphor for the characters' alienation from the universe and, ultimately, themselves.

This novel owns a berth in the pantheon of great novels! Do yourself a favor and read it.