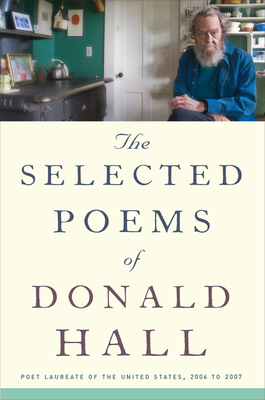 The Selected Poems of Donald Hall

All Editions of The Selected Poems of Donald Hall

The Lies That Bind: Rethinking Identity

Thinking Without a Banister: Essays in Understanding, 1953-1975

African Americans and the Gettysburg Campaign

An Aging Poet Revisits His Art

Donald Hall (1928 -- 2018) knew from early adolescence that he wanted to be a poet; and he has, indeed, devoted his life to the art. Hall has published many books of poetry and memoirs and received numerous honors, including his designation as Poet Laureate of the United States from 2006 -- 2007. Now in his mid-80s, Hall discovered that he no longer has the ability to write poems. He has instead revisited the body of his life's work and selected 79 of what he deems his best poems to create this new anthology, "The Selected Poems of Donald Hall". Readers new to Donald Hall will be able to get immediately to the poems that Hall deems worth preserving. Those readers familiar with Hall's work will enjoy comparing his selections of poems with their own favorites.

A short Afterword to the book says a good deal about Hall and his poetry. Hall writes in a spare, simple, accessible style. Many of his poems are deeply personal as Hall writes about his upbringing and later life in New Hampshire and about his relationships with those dear to him. The poems in the volume are set throughout Hall's life. They show the death of Hall's loved one's including his grandfather, father, and, in particular, his wife, the famed poet Jane Kenyon. (1947 -- 1995). Hall was disconsolate upon Kenyon's death and wrote many poems about her which expressed his grief.

Hall describes the subject of his poetry as "Love, death, and New Hampshire". He offers the following elaboration: "When Jane and I moved here from Ann Arbor, where I taught, we were blissful in our new landscape and in my ancestral family place. We loved living alone in the country, with each other and with poetry, at the farm where I spent old summers haying with my grandfather. At first, Jane's poems considered how she might fit in, adapting to somebody else's century-old place. She fit. We wrote about where we lived. We wrote about each other."

With the deceptive simplicity of Hall's writing, it is insightful to learn about the slow growth of each poem, the constant writing and re-writing, and the suggestions and constructive criticism he received from Kenyon and from others. In Hall's modest words and in his poems, the reader learns of the commitment and effort required to write well. Kenyon would read Hall's poems for what she termed "dead metaphor". With the aid of her critical eye, "dead metaphors" are virtually absent from this collection of poems.

Many of Hall's poems tell a little story. They take a specific event and encourage the reader to understand it and also to think beyond. Thus, in the first poem in the book, "My Son My Executioner", Hall reflects on the birth of his newborn child and of the mortality it foreshadows for himself and his wife. In "Christmas Eve in Whitneyville", Hall meditates on the Christmas Eve death of his father at age 52 and on what he sees as the nature of conventional, unimaginative life in small-town America. Of the many poems about Jane Kenyon, I found most moving "The Wish", in which Hall imagines his dead wife's "weary ghost" imploring him "oh, let me go" to allow her to rest in peace and to allow Hall to go forward with life.

Hall's range is broader than confessional poems. The volume includes poetry about baseball and about WW II. A poem, "Wolf Knife" tells a story based upon an account of a nineteenth century polar expedition. Some of the poems have a sharply satirical tone, including "To a Waterfowl" and "Black Olives", in which Hall contrasts the love life of a poet with that of his more pedestrian contemporaries. The poems "Prophecy" and "Woolworth"s show a tone of social anger while "T.R." offers a surprising tribute to the first President Roosevelt. Two poems, "The Master" and "The Poem" offer reflective observations on the nature of writing poetry. In "Old Roses", Hall celebrates the beauty and evanescence of life describing "men and women/who sniffed roses in spring and called them pretty/as we call them now,/walking beside the barn/on a day that perishes."

This collection, the work of a poet in old age reflecting upon his poetry, will delight readers with an interest in contemporary American poetry.