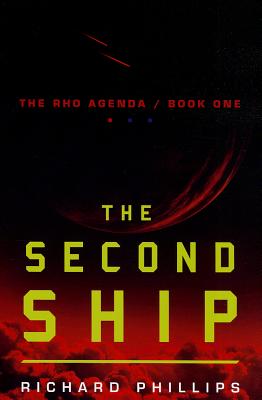 For sixty years, the National Laboratory in Los Alamos, New Mexico, has been investigating the powerful technologies of a damaged alien ship, an effort dubbed the 'Rho Project.' Now, the American government is ready to share the Rho Project discoveries with the world. But as the world scrambles to adopt the alien technologies, three high schoolers make another shocking discovery: hidden inside a cave in the New Mexico wilderness lies another alien ship. As the friends explore the second ship, they begin to unravel a decades ... Read More

For sixty years, the National Laboratory in Los Alamos, New Mexico, has been investigating the powerful technologies of a damaged alien ship, an effort dubbed the 'Rho Project.' Now, the American government is ready to share the Rho Project discoveries with the world. But as the world scrambles to adopt the alien technologies, three high schoolers make another shocking discovery: hidden inside a cave in the New Mexico wilderness lies another alien ship. As the friends explore the second ship, they begin to unravel a decades-long secret involving an extraterrestrial war, government cover-ups, and secret experimentation using alien technology on humans. A battle has begun, and the secrets of the second ship may be the key to humanity's last chance for survival. Read Less

All Editions of The Second Ship

All the Old Knives

Beneath the Dark Ice

by James S A Corey

The Moon Is a Harsh Mistress

Would be a great book for teens. For adults, not so much. Interesting theme and clever plot.

I can hardly wait to get the other books in the trilogy.

It has some gritty stuff, so I wouldn't recommend this for young teens, even though the protagonists are high school kids.

The author is an engineer, so the science is very credible too.

Exceptional first book in the Rho Agenda series! I was grabbed in the Prologue and wasn't let go. Great reading for young people, sci fi buffs and UFO fans, amazing yet made plausible, some perhaps even probable, BUT you do not have to be a fan of sci-fi to thoroughly enjoy this book, it covers so many genres. Richard Phillips is an author to be reckoned with, absolutely incredible. He knows exactly what he is saying and knows how to say it.

For those readers who are UFOnauts, it all begins in Groom Lake, Nevada, site of the infamous Area 51. Book One of the Rho Agenda, takes place in and around Los Alamos, New Mexico. I am old enough to recall the "Roswell Incident" when it happened, so the book is of particular interest to me. However, don't be led astray by that personal fact, this is not about Roswell. This is The Second Ship. A model plane is the method through which this ship will be discovered; not just a model plane but one carrying a camera as an experiment. This model plane just happens to crash in some difficult terrain and must be retrieved.

Three high school students, while retrieving their plane, have stumbled across a cave which hides the back entrance, or rather entry point, where an alien ship buried itself when crashing. A highly sophisticated camouflaging device almost thwarts them, but no, they can actually walk right through it, disappearing as they go in and completely out of sight once they are in. As they turn around, they see the back of the ship which they feel must have been able to generate the cloaking devise at the mouth of the cave. There is a gaping hole where it appears the ship was shot down, perhaps by the Rho ship.

The Rho ship crashed in the next year after the Roswell event, and has been undergoing tests in either another cavern or another part of the same cave. This ship was also damaged but whether from the crash or a collision or shot down is unknown. The authorities, from several different areas of security, presumably only know of the Rho ship, a cigar-shaped monster. This second ship the teens have just discovered is round, has a mind of its own and is only too ready to give portions of it to the newcomers. The problem with being a high school student though, is that there are certain restrictions on your free time, which makes it difficult for them to spend much time with the ship, but when they do, miraculous things happen.

Each student already excels in specific areas: Heather in mathematics, her next-door neighbours the twins Jennifer, excelling in technology, and Mark, into sports. Now, having investigated a number of areas in the ship and done some tests, they have found these skills amplified by multiples. They must now play down their skills so they won't draw attention to themselves and raise suspicion. Soon, Heather realizes that she is being 'stalked' by a skinny tattered man who appears homeless and possibly dangerous. Somehow he knows that they have been to the Second Ship.

This book has it all; humour, terror, alien ships, corruption, love, kidnapping, good, evil, secret agents, exciting, conspiracy, greed, thrills and chills, intrigue, deep dark secrets, action, adventure, and great cliff-hangers, especially the last one. The writing style keeps the reader in a constant race against time, running several parts of the story in chapters of their own. This is not as difficult as it sounds, I found it easier to keep track of the parts that make up the whole this way. Other styles would have left me floundering. The book is extremely readable, technical terms seem easy to grasp for the novice, and the action never stops, very fast paced. "The Second Ship" leads into a "must have" feeling for the second book of the series, "Immune". This series definitely promises to carry on like lightning.