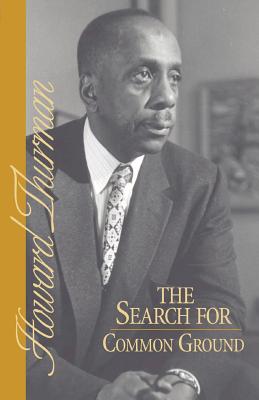 The Search for Common Ground

Howard Thurman writes about building community. He calls us at once to affirm our own identity, but also to look beyond that identity to that which we have in common with all of life. Read More

Howard Thurman writes about building community. He calls us at once to affirm our own identity, but also to look beyond that identity to that which we have in common with all of life. Read Less

With Head and Heart: The Autobiography of Howard Thurman

The African American religious thinker Howard Thurman (1899 -- 1981) has been receiving attention of late with the release of a PBS documentary, "Backs against the Wall" devoted to Thurman's life together with news articles and books, including Gary Dorrien's study "Breaking White Supremacy: Martin Luther King, Jr. and the Black Social Gospel". Dorrien's book kindled my interest in Thurman.

Thurman is best-known for his 1949 book, "Jesus and the Disinherited" which influenced Martin Luther King. However, Thurman described this 1971 book, "The Search for Common Ground" as "constituting my lifelong working paper". In this short, spare book, Thurman described his quest to find unity and wholeness in life and the sources of that quest. He discusses life as the quest by the lonely, finite individual to find meaning through understanding his relationship to other persons and, more broadly, to the whole of reality. This quest makes Thurman a philosophical monist and with his strongly experiential, religious orientation it makes him a mystic. Many people do not share Thurman's mysticism and sense of the continuity of all being. It is valuable to hear Thurman expound this position in this short, eloquent, and difficult book.

The book consists of six short chapters together with a Preface. The critical part of the book is the opening chapter "Concerning the Search" in which Thurman sets forth the goal of the book in broad, philosophical terms. Thurman finds that each individual person has a need to be with others to overcome loneliness and to realize potential. Thus, individual life involves an ever-expanding search for community. As a religious thinker, Thurman does not stop with human community but rather finds that the "intuitive human urge for community reflects a characteristic of all life". Thurman gives a broad, metaphysical and religious cast to the search for community. He writes:

"The religious basis for such an interpretation of community is the affirmation, which to me is categorical, that the Mind of God realizes Itself in time, and that there are observable patterns or sequences in all. ... Existence itself is construed as divine activity. There seems to be a principle of rationality in all existence, and the significance of this can be found in the order in life. True, what seems to be a principle of rationality as expressed in observable order in life may be a limitation of mind itself. Yet it is the assumption of inherent logic in the functioning of mind that makes comprehension of the external world possible."

In the following four chapters, Thurman applies his search for commonality and unity to four broad areas of life. In "The Search into Beginnings", Thurman finds a universal human need for wholeness and restoration from division expressed in religious myths. He examines the Biblical story of creation as well as a discussion of the creation story of the Hopi tribe. The following chapter "The Search into Beginnings" finds a universal shared process of life in scientific theory from cosmology through evolution. In a broad, provocative claim Thurman states that "God stands in relation to all existence somewhat as the mind of man stands in relation to his time-space existence".

In "The Search for the Prophet's Dream" Thurman explores a variety of sources, including the Bible, Plato's "Republic" and Thomas More. The goal is to show recognition of the fragmented character of life torn by divisions and hatreds and to explore ways in which various utopian thinkers have argued that this fragmentation could be overcome. In a chapter titled "The Search for Common Consciousness" Thurman argues that a common consciousness and mind is shared not only among human beings but rather among all life. Much of the chapter involves instances of human interactions with animals to suggest what this common consciousness might mean.

Thurman states that he had a difficult time writing the final chapter of the book and relating it to what proceeded it. The book's final chapter, "The Search for Identity" is the book's longest and deals with social philosophy in the United States with an emphasis on the African American struggle for civil rights. Thurman offers a detailed depiction about the importance of participation in a secular community as a means for attaining wholeness and union, both on an individual and on a societal level. He discusses He discusses the status of African Americans as outsiders beginning with slavery and continuing through the Civil War, Reconstruction and Jim Crow. He sees African Americans as gradually attaining the power and the ability to demand full inclusion in the community. The central figure in Thurman's account is Martin Luther King, Jr. As mentioned earlier, King had himself been greatly influenced by Thurman's book "Jesus and the Disinherited". Thurman argues, that after King, African Americans had split with some favoring separatist movements, including those advocating for Black Power. Thurman understands the force of the separatist movement but he rejects it as inconsistent with a society based on unity, wholeness, He writes: "It is my considered judgment that the present solution is a stop-gap, a halt in the line of march toward full community or, at most, a time of bivouac on a promontory overlooking the entire landscape of American society. .... Men, all men belong to each other, and he who shuts himself away diminishes himself, and he who shuts another away from him destroys himself."

I have learned a great deal from studying Thurman. I have been moved by his mysticism, his search for unity, and for individual human development. I have learned from how Thurman uses his broad metaphysical and religious beliefs to develop an activist mysticism which recognizes the human equality and fellowship of all people and groups.