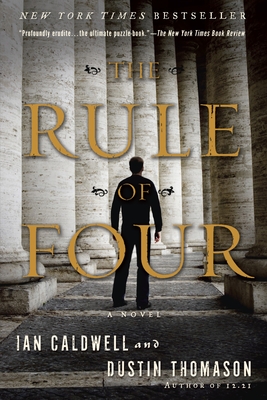 The Rule of Four

Now in paperback--the astonishing "New York Times" bestselling novel about two friends who find the key to a labyrinth that holds the secrets of an ancient text called the "Hypnerotomachia Poliphili." When a fellow researcher is murdered, they suddenly realize they are caught in a web of great danger. Read More

Now in paperback--the astonishing "New York Times" bestselling novel about two friends who find the key to a labyrinth that holds the secrets of an ancient text called the "Hypnerotomachia Poliphili." When a fellow researcher is murdered, they suddenly realize they are caught in a web of great danger. Read Less

All Editions of The Rule of Four

I read this on the heels of re-reading "The DaVinci Code" by Dan Brown and I while I found this book a bit slow in the beginning, I soon found I wasn't disappointed in my choice of novels.

I am the type of person who will buy and read a series in the order its written which some times means a long wait between books and I was very, very happy to have this book in my bag as I travelled on buses for long rides into and out of New York City. I was sorry to have the tale end!

The Rule of Four has a beginning and an end. In between, however, nothing much happens. The youth of the authors is evident as a bulk of the novel concerns itself with walking across campus, talking to professors, worrying about classes and hanging out with friends. There's an awkward, unconvincing romance, some immature relationships between roommates and, from time to time, a mystery involving an ancient book. Note to Dan Brown wannabes: it's okay if your hero's a student or professor, but they should actually leave campus at some point. Supposedly there's an ancient treasure at stake, but instead exploring the catacombs and back alleys of Italy, we get to explore the buildings and dormitories of Princeton. Sorry, the wishy-washy desires of the immature protagonist are not enough conflict to propel this story.

Tom Sullivan is running away from the Hypnerotomachia Poliphili which he views as his father's mistress. He watched its hypnotic effect on his father before his father's death and doesn't want to be drawn in. But his friend Paul Harris, working on his culminating paper at the close of his senior year at Princeton, asks for his help anyway. Due to several fateful and fated circumstances, Tom finds himself drawn in despite his apprehension.
The story draws one in like a spider dancing on a web. Each strand pulls the reader farther & farther into the center until one realizes that, just like Tom, its mystery is appealing. It's major drawback is also part of its appeal: each revealed passage is convoluted and cryptic enough so one needs the authors' interpretation to understand it.