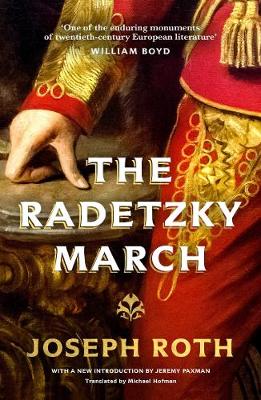 The Radetzky March is a meditation on the Austro-Hungarian Empire through the prism of three generations of the Trotta family. The novel opens in 1859 at the Battle of Solferino, when the young Lieutenant Trotta saves the life of the Emperor and is ennobled. He owes the Empire everything, and his son also becomes a conscientious servant of the great multinational state even as it enters into its period of chaos, with competing nationalisms and ideologies tearing it apart. The final generation of Trottas cannot comprehend or ... Read More

The Radetzky March is a meditation on the Austro-Hungarian Empire through the prism of three generations of the Trotta family. The novel opens in 1859 at the Battle of Solferino, when the young Lieutenant Trotta saves the life of the Emperor and is ennobled. He owes the Empire everything, and his son also becomes a conscientious servant of the great multinational state even as it enters into its period of chaos, with competing nationalisms and ideologies tearing it apart. The final generation of Trottas cannot comprehend or survive the collapse of the Empire, which no longer has any purchase on reality. Beginning at the moment when the Habsburg dominions began to crumble, and ending at the moment when the old Emperor's body is finally entombed in the vault of Capuchins in Vienna, the narrative arc of Roth's novel is perfectly judged. However, it is Roth's intelligent compassion and ironic sense of history that confer on The Radetzky March its greatness. Read Less

All Editions of The Radetzky March

The Bridge on the Drina

The world of yesterday an autobiography

Late in the Civil War, in July, 1864, a small Confederate army under Jubal Early attacked Washington, D.C. President Lincoln watched the attack from Fort Stevens and looked at the position through field glasses. Lieutenant Oliver Wendell Holmes is said to have shouted at the president, "Get down, you damn fool!" Many years later, Holmes would serve as a Justice of the Supreme Court of the United States.This alleged incident has become a famous Civil War story while most scholars doubt that it happened.

I was reminded of the Holmes/Lincoln story in the opening scene of "The Radetzky March", Josef Roth's great novel. During the 1859 Battle of Solferino, the young emperor Franz Joseph stands in front of the line and exposes his person to view the enemy. Lieutenant Joseph Trotta, a man of humble birth, jumps up, shields the emperor, and takes a bullet in the shoulder. He saves the emperor's life. The grateful Franz Joseph confers nobility on the Trotta family. Roth's novel tells the story of Trotta who becomes known as the "Hero of Solferino", his son, and his grandson. At one point in the story, Trotta objects to the embellishment of his role in history books given to children. The story becomes embellished in a way, perhaps, comparable to Holmes, who did not try to get Lincoln out of harm's way on Fort Stevens.

"The Radetzky March" was written in 1932 and constitutes a look back at the Austria-Hungarian Empire prior to its dissolution during the Great War. Most of the story takes place in the years before the outbreak of the War. Roth weaves the story of the Empire into the story of the Trottas. The primary character is Carl Joseph Trotta, the grandson of the "Hero of Solferino" who becomes an army lieutenant. His father, who becomes a high public official, the District Commissioner, is also an important figure. The "Hero of Solferino" himself appears as a great influence throughout the book but after the opening pages assumes an almost misty, legendary status.

The enoblement of the Trottas, meant as a reward of gratitude, leads to their demise. The three generations do not handle their status well. There is a rigidity in their conduct, an undue and awkward formality, and a lack of awareness on the part of each of the three Trottas of feeling and self. Culminating in the young lieutenant, Carl Joseph, the Trottas show a lack of commitment to the lives they have and a tendency to wander and to lack a sense of purpose in life. The individual stories of the Trottas mirror the history of the Empire which was large, diverse, and increasingly disunited under the aging Franz Joseph. In Roth's book, the Empire had ceased to exist as a cohesive entity before the outbreak of WW I. It had deteriorated due to its sheer size and diversity, to the rise of nationalism, and to the presence of many sharply competing ideologies.

Roth's book moves deliberately with characters, scenes, and places described in great detail. The book meanders, much as did the Empire. Roth describes the dull, unfulfilled life of Carl Joseph, primarily, with his lack of interest in the military, his brief affairs and inability to form a deep relationship with a woman, and his descent into alcohol and debt. The book describes many different places and people in the Empire from Vienna to small towns to remote outposts on the border with Russia.

The book has a melancholy, reflective tone. The author understands the demise of the Empire and sees its inevitability. Without overlooking its flaws and weaknesses, Roth is fond of the old Empire and the Emperor and its attempt to provide culture, unity, and stability for its broad component elements. He appears skeptical of the nationalism and individualism that virtually brought the Empire to an end before its defeat in the Great War.

The book can be read as a story of the Austro-Hungarian Empire and also as a story of the demise of other established orders or beliefs, political, social, or religious. The sense of the book, for me, is of the value of shared value and loyalty in the face of diversity and change. There is a sense of the value of cosmopolitanism in the book and of the Empire's stumbling attempt to bring a degree of liberality and unity to people of widely divergent backgrounds and beliefs. With the demise of the Empire and the rise of nationalistic, radical elements following the Great War, Roth had reason to be concerned. Perhaps, in a broad way there is a lesson in this book for our polarized, divided country as well. In any event, "The Radetsky March" in an outstanding, sad, and beautifully written novel. I read the book in this translation by the poet Michael Hoffman. Other translations are available as well.