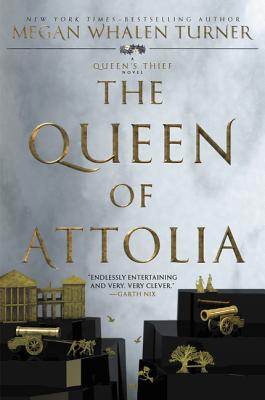 The Queen of Attolia

Readers who first met Eugenides as the rascally teenager Gen in the Newbery Honor-winning "The Thief" will find that in this sequel he deepens through suffering and loss, but keeps the same witty talent for elaborate, crafty schemes of espionage and theft. Read More

Readers who first met Eugenides as the rascally teenager Gen in the Newbery Honor-winning "The Thief" will find that in this sequel he deepens through suffering and loss, but keeps the same witty talent for elaborate, crafty schemes of espionage and theft. Read Less

All Editions of The Queen of Attolia

Return of the Thief

The King of Attolia

Beauty: A Retelling of the Story of Beauty & the Beast

A Conspiracy of Kings

The King of Attolia

Please read the first in the series - The Thief -a Newbery winner. If only all young adult literature was written as well! Very well constructed with VERY high vocabulary. Although it is not difficult to understand if you are a practiced reader, I would NOT recommend to students younger than in their teens simply because it does require comprehension skill to read and enjoy. The plot twists and turns and the characters are real and well fleshed out. You have to understand that actions by people may not always reflect their true emotions, but may be learned behavior to protect themselves from the evils of the world. If you enjoy growing with the characters as they mature and recognize inner truths PLUS enjoy action and suspense, you will like this book regardless of your age.

The intrigue and emotional investment of both characters and reader are heightened in this second book about the thief, Eugenides. The story opens with Gen sneaking through the back passages and secret tunnels of the Attolian palace. When he is unexpectedly captured, the Queen wreaks a terrible revenge on him not only for his theft of Hiamathes Gift, but even more for the defiance Gen dared show her at their last meeting. Afterward, Gen's own Queen enlists his help in political maneuvering against the warring kingdoms that surround them, especially now that the powerful and wealthy Medes from across the sea are aiding Attolia in her bid for dominance. Will Gen be able to aid his Queen and save her throne? Can he outsmart two opposing monarchs, their henchmen, and their interlopers? What can the Thief possibly steal to win a war?

I love Ms. Turner's use of language, her layered plots, and her multi-faceted characters. Is anyone truly all good or all bad? Maybe, but which ones? I love her inclusion of Greek-style folk tales; she is obviously a top-notch scholar in the field, and they add interesting tones and shadows to the overall plot and character development.