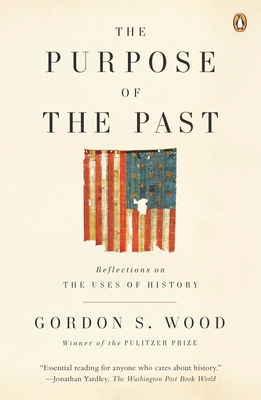 The Purpose of the Past: Reflections on the Uses of History

In The Purpose of the Past, historian Gordon S. Wood examines this sea change in his field through consideration of some of its most important historians and their works. He offers wonderful insight into what great historians do, how they can stumble, and what strains of thought have dominated the marketplace of ideas in historical scholarship. The result is a history of American history, as well as an argument for its ongoing necessity. Read More

In The Purpose of the Past, historian Gordon S. Wood examines this sea change in his field through consideration of some of its most important historians and their works. He offers wonderful insight into what great historians do, how they can stumble, and what strains of thought have dominated the marketplace of ideas in historical scholarship. The result is a history of American history, as well as an argument for its ongoing necessity. Read Less

All Editions of The Purpose of the Past: Reflections on the Uses of History

Original Meanings: Politics and Ideas in the Making of the Constitution

Telling the Truth about History

The Americanization of Benjamin Franklin

The title of the book suggests a volume devoted to the practice of writing history or to the philosophy of history. Wood indeed addresses these large subjects but in an unsystematic, piecemeal way. The volume is a collection of 21 book reviews Wood wrote for educated nonspecialist readers and published in magazines such as "The New York Review" and "The New Republic". The reviews begin with Wood's April 2, 1981 review of Garry Wills' "Explaining America" published in the "New York Review" and conclude with a June 28, 2007, review in the "New York Review" of two books: "Dark Bargain" by Lawerence Goldstone and "American Taxation, American Slavery" by Robin Einhorn. The volume begins with an Introduction in which Wood addresses his approach to understanding history that informs his reviews and larger writings. Following each review, Wood offers thoughts on its reception and on Wood's current views of how he understood the book he had reviewed earlier. It would have been good to hear Wood discuss his views on writing and understanding history more completely and systematically rather than in the context of reviews of different books written over more than 25 years. But what he has given the reader remains valuable.

The book is highly interesting for its approach to history and for its approach to writing reviews. I will try to offer some thoughts on each. Wood's book offers the opportunity to get acquainted with some of the best contemporary historical writing, largely involving the Revolutionary Era. Wood's understanding of this period and his erudition are prodigious and his views balanced. Much about the period can be learned from reading the articles included here.

In the introduction and the reviews Wood offers his view of what history is, a discipline which endeavors to understand the past in all its complexity, and its value. For Wood, history cannot be used for direct lessons on contemporary issues and it is a mistake to read such issues into one's approach to the past. Wood eloquently describes the value of history as follows (p. 14)

"History is not just comfort food for the anxious present. Yet it does offer a way of coming to terms with an anxious present and an unpredictable future. Realizing the extent to which people in the past struggled with circumstances that they scarcely understood is perhaps the most important insight flowing from historical study. To understand the past in all its complexity is to acquire historical wisdom and humility and indeed a tragic sense of life. A tragic sense does not mean a sad or pessimistic sense of life; it means a sense of the limitations of life."

Many of Wood's reviews address books in which he finds that the author has unsuccessfuly tried to import current concerns and issues into the writing of history. Thus, while Wood welcomes the many current studies that explore the roles of gender, slavery, and poverty in early America, he rejects what he sees as the frequent efforts of authors to understand these issues through present day concerns rather than through historical circumstance. Wood also addresses philosophical ideas of postmodernism, relativism, or deconstruction that have gained prominence in some historical writing. He wants to reject these theories, it seems to me, as unworkable and to return, however tentatively, to a theory of history and theory of knowledge in which the historian assumes it is possible to gain some accurate knowledge of the past, if only in approximation. Wood sees the value in expanded narrative history (expanded to include underrepresented groups such as women or minorities) which emphasizes purpose and broad historical trends rather presenting history as the study of insular groups.

Now, I want to turn briefly to reviewing. I was glad to see this collection of Wood's reviews because it made me think of reader reviews here on Amazon and on what I and my fellow Amazon reviewers try to do with them. Wood says of writing the types of reviews collected in this book (p. 1):

"Although such long reviews take a considerable amount of time, ... I have never regretted writing them. Not only do such lengthy reviews for nonacademic journals require you to come to terms with the larger implications of the book under review, but they force you to convey what you say in language that is intelligible to general readers. Writing reviews for a lay readership is a marvelously stimulating experience, and all historians ought to try to do it."

Wood's reviews tend to be in the range of 4000 words or more, substantially longer than Amazon reviews. And unlike Amazon reviews, written by a lay readership, Wood is a consummate student of his subject. There is much to be learned still in the way Wood tries to explain the content and the approach of a book. Wood offers substantial detail about the works he reviews, frequently with references to other works by the author. Wood combines his exposition with criticism and analysis, of the types I suggested above. It is highly valuable to see Wood do this, but there are limitations. Wood brings to his reviews his own vast learning and perspective. While I tend to sympathize greatly with his approach to history and philosophy, Wood proves to be a somewhat harsher critic in some cases than I thought he might be. He tends, I think, to reduce other authors to what he is trying to do and to his understanding of the historical enterprise when, in some case, the authors are trying to do something different which may not be history, strictly, but may still have value. An example is Wood's October 30, 2000, review of John Diggins' book, "On Hallowed Ground:Abraham Lincoln and the Foundations of American History." This review interested me because it is the only book Wood reviewed in this collection that I have also reviewed as an amateur here on Amazon (I have read but not reviewed some of the other books.)On Hallowed Ground When I revisited my review of Diggins, I found some agreement between my views and Wood's. Yet I was more sympathetic, perhaps wrongly so, than this distinguished author. I thought that in some cases, Wood tended to approach the books he reviewed entirely from his own perspective without trying as hard as he might have done to get inside the mind of the author. It seemed to me that a more internalized approach might also have value in reviewing. Writing reviews is a way of understanding and critiquing a book so that the reader can judge whether he or she wants to pursue it further. But it is also, on howsoever small a scale, a free standing work by the author of the review.

I enjoyed reading Wood's collection of reviews in order to learn about history and its writing and to think about the writing of reviews and its purpose, both by wonderfully professional writers and by amateurs, such as myself, who review online.

Gordon Wood presents thoughtful and insighful reviews of the works of several diverse authors over the past couple of decades.Very readable, and highly recommended.