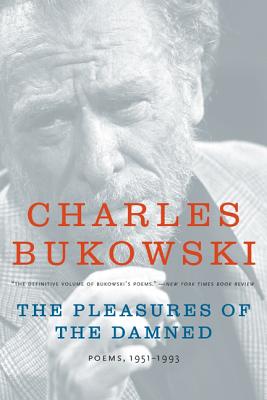 To his legions of fans, Charles Bukowski was--and remains--the quintessential counterculture icon. A hard-drinking wild man of literature and a stubborn outsider to the poetry world, he wrote unflinchingly about booze, work, and women, in raw, street-tough poems whose truth has struck a chord with generations of readers. Edited by John Martin, the legendary publisher of Black Sparrow Press and a close friend of Bukowski's, The Pleasures of the Damned is a selection of the best works from Bukowski's long poetic career, ... Read More

To his legions of fans, Charles Bukowski was--and remains--the quintessential counterculture icon. A hard-drinking wild man of literature and a stubborn outsider to the poetry world, he wrote unflinchingly about booze, work, and women, in raw, street-tough poems whose truth has struck a chord with generations of readers. Edited by John Martin, the legendary publisher of Black Sparrow Press and a close friend of Bukowski's, The Pleasures of the Damned is a selection of the best works from Bukowski's long poetic career, including the last of his never-before-collected poems. Celebrating the full range of the poet's extraordinary and surprising sensibility, and his uncompromising linguistic brilliance, these poems cover a rich lifetime of experiences and speak to Bukowski's "immense intelligence, the caring heart that saw through the sham of our pretenses and had pity on our human condition" ( New York Quarterly ). The Pleasures of the Damned is an astonishing poetic treasure trove, essential reading for both longtime fans and those just discovering this unique and legendary American voice. Read Less

Love Is a Dog from Hell

Journey to the End of the Night

There have been many times when I've purposely avoided poetry collections of an author whom I like & admire as a novelist... That was my feeling when I saw the late Mr. Bukowski had a poetry collection... Why struggle to read verse when prose is so much easier? (Hah!) But then I recalled how I spent so many enjoyable hours with poetry collections of Allen Ginsberg, Audre Lorde, John Updike and many others. When I got done reading those collections of poetry I felt I understood and had been in communion with the author in a much deeper way than from reading a novel... So, I decided to do same with Mr. Bukowski! Wow! I had no idea the book is so big! But just reading the first few of these humorous and lucid poems has given me insights into what an incredible mind this author, so marred by his "wild" reputation, truly had. Thank you, Mr. Bukowski for giving all who venture into your wonderful books, such marvelous and plentiful gifts!

Pleasures Of The Damned

Charles Bukowski writes that the pleasures of the damned are "limited to brief moments/of happiness:/like the eyes in the look of a dog." The poem gives its name to this 2007 anthology of Bukowski's poetry, prepared by John Martin, Bukowski's long-time friend and editor and the founder of the Black Sparrow Press, which published most of Bukowski's works.

Charles Bukowski (1920 - 1993) was an underground, cult novelist and poet whose reputation has continued to grow since his death. Bukowski is best known for his novels including "Ham on Rye", "Women" and "Factotum" and for the several movies which have been made of his works and life (including "Barfly" featuring a young Mickey Rourke.) But Bukowski also wrote many volumes of poetry, some of which continue to be published posthumously. Martin has culled through over 2000 published poems to produce this anthology of 550 pages and 271 poems, including 20 poems which had not been published earlier.

Known as the "poet of Skid Row", Bukowski was born in Andernach, Germany. At the age of three, his family moved to Los Angeles where Bukowski lived for 50 years. As a young and middle aged man, Bukowski led a tattered life which he captures in his poetry. He writes of cheap rooming houses, alcohol, poverty, horse racing, and relationships with women, many of which are of the commercial variety. His poems are in a simple free verse form generally with short lines. They are easy to read. The poetry is tough, raw, vulgar, and gritty. The earlier poems tend to be shorter, imagistic, and autobiographical. The latter poems tend to be longer and frequently are more in the nature of stories or narratives than the earlier writings. As Bukowski aged, he attained a substantial degree of popular success. The latter poems reflect this success and are frequently meditative and tamer than his earlier work. Throughout Bukowski exhibits a sharp, sardonic sense of humor.

Bukowski wrote a great deal and wrote quickly. Thus, his poetry is highly uneven. Many of his poems are pessimistic in tone, focusing on death or suicide. But they also show a certain determination to live and to take the experiences life gives. The poems also emphasize the power of art, its rarity, and the ability it has to redeem even a shabby, sordid, and difficult life.

The preparation of an anthology has certain difficulties which Martin has not always surmounted. First, this anthology, similar to Bukowski's output, is too long and includes too many weak poems. Conversely, readers familiar with Bukowski's poetry will undoubtedly find that some of their favorites are not included in this collection. Poems that I missed included "Love Poem to a Stripper", "To the Whore that took my Poems", "The Beats" and others. The collection is also weighted heavily towards the latter, posthumously published works. These poems are valuable in their meditative quality, and in showing Bukowski facing illness and death and writing until the end. But they lack some of the grit for which he is likely to be best remembered. Thus, the anthology could have been shorter, better selected, and weighted somewhat differently.

With that said, Martin has captured a great deal of Bukowski and his poetry. This book gives readers, especially those new to Bukowski, a feel for his work. It includes in one place many poems that admirers of Bukowski will want to keep and revisit. The book opens and closes with two of Bukowski's best poems. The opening poem "the mockingbird" is a short, violent parable of death and destruction. The penultimate poem in the collection "the bluebird" takes a much different tone, as the seemingly harsh Bukowski tells the reader:

"there's a bluebird in my heart that
wants to get out
but I'm too tough for him.
I say, stay in there, I'm not going
to let anybody see
you."

The best poems in the collection, and in Bukowski's work on the whole, are those which treat of women and sexuality in all their passion, rewards, and dangers. Somewhat less well-known are Bukowski's tributes to musicians, artists and writers. Bukowski loved classical music, and his poems celebrate Hugo Wolf, Verdi, Bruckner, and, in a poem called "closing time", Beethoven. Bukowski writes: "I/admire the verve and gamble/of this composer/now dead for over 100/years,/who's younger and wilder/than you are/than I am."

Other poems celebrate the death of John Fante, a writer that Bukowski greatly admired, together with figures such as Li Po, Sherwood Anderson, Carson McCullers and Van Gogh. In a poem called "the burning of the dream" Bukowski looks back at his days reading in the old downtown Los Angeles Library before its destruction by fire. The poem describes Bukowski's early and extensive reading and the credo he tried to follow as a writer. He states:

"It would take decades of
living and writing
before I would be able to
put down
a sentence that was
anywhere near
what I wanted it to
be."

The poems in the collection do not appear in any particular order; although the poems in which Bukowski describes his cancer and impending death are grouped towards the end. The anthology concludes with a useful alphabetical index of the poems which allows the interested reader to trace each poem to the book in which it first appeared.

Bukowski is not a poet for everyone or for every mood. But I have continued to read and to be moved by his writing for many years. Martin has produced a good anthology of poems by an American outsider.

Book in not so good condition, but OK

I just got the book, not because a long shipping but because I got through a friend. Anyhow, book was advertised as fair condition and I'm sorry to say, after buying many used books, that this was not. It was in a poor conditions with many marks and pages bended. I will enjoy it no matter what I'm sure of it.