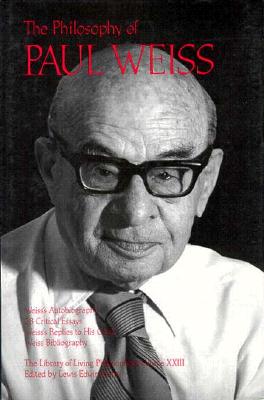 The Philosophy of Paul Weiss, Volume 23

Born in 1901, Paul Weiss has made major contributions to several branches of philosophy, as well as to teaching and scholarly publishing. Alfred North Whitehead remarked: "The danger of philosophical teaching is that it may become dead-alive, but in Paul Weiss's presence that is impossible." Weiss is widely believed to be America's greatest living speculative metaphysician, but he has also made notable philosophical contributions to the discussion of sports, the arts, religion, logic, and politics. Professor Weiss has been ... Read More

Born in 1901, Paul Weiss has made major contributions to several branches of philosophy, as well as to teaching and scholarly publishing. Alfred North Whitehead remarked: "The danger of philosophical teaching is that it may become dead-alive, but in Paul Weiss's presence that is impossible." Weiss is widely believed to be America's greatest living speculative metaphysician, but he has also made notable philosophical contributions to the discussion of sports, the arts, religion, logic, and politics. Professor Weiss has been highly productive: his Being and Other Realities (1995) was hailed as one of his most exciting books, and as this volume goes to press he is hard at work on yet another major treatise. Read Less

The world of art.

Toward a Perfected State

Paul Weiss In The Library Of Living Philosophers

I remember the then-famous philosopher Paul Weiss (1901 -- 2002) coming to the University of Wisconsin -- Milwaukee during my undergraduate years (c. 1967 --68) and giving a lecture. After Weiss' lecture, one of the members of the philosophy department remarked that "I didn't think anyone like that was still around". I was fascinated by Weiss at the time and by his commitment to a broad, systematic, metaphysical philosophy. Unfortunately, I didn't much purse my interest in Weiss, even during the years we both lived in Washington, D.C. while he taught at the Catholic University of America. Unfortunately, Weiss is almost forgotten and unread today. Weiss founded an influential philosophy journal, the "Review of Metaphysics" together with a scholarly society, "The Metaphysical Society of America". I was fortunate to present a paper at the 2019 annual meeting of the society. Weiss is also known for his early work with Charles Hartshorne in producing an edition of the papers of the American philosopher Charles Sanders Peirce. He taught philosophy for sixty years and was revered as a stimulating, provocative teacher.

I recently took the opportunity to read this large volume, both by and about Weiss, "The Philosophy of Paul Weiss" (1999), the 23d book in the ongoing Library Of Living Philosophers (LLP) Series. This series was founded in 1938 by Professor Paul Arthur Schlipp to promote critical discussion and analysis of the works of great philosophers while they were still alive. The publisher aptly describes the LLP as "an unparalleled series that has made an advancement to the understanding of philosophy through rational debate." There currently are thirty-six bulging volumes in the series beginning with John Dewey and currently concluding with Julia Kristeva. The volume on Weiss is the first I have read from cover to cover.

The format for the LLP and for this volume on Weiss includes a lengthy autobiographical essay followed by a series of essays by scholars discussing important aspects of the thought of the subject of the volume. The subject then responds to each of the individual essays. The format allows for discussion and debate, an increased appreciation for philosophical questions and for the work of the subject of the volume, and for civility and rationality.

Weiss' intellectual autobiography which opens the volume is titled "Lost in Thought: Alone with Others." The first part of the autobiography gives a brief sketch of Weiss' early life, growing up as a child of immigrants in a Jewish neighborhood in the Lower East Side of New York City. Weiss dropped out of high school and for a short time was learning to be a boxer. He found his way to the City College of New York where he studied with Morris Raphael Cohen and earned a PhD in philosophy at Harvard under Alfred North Whitehead.

In the larger part of "Lost in Thought", Weiss describes his understanding of the nature of philosophy as set forth in his voluminous writings. Weiss is usually and accurately described as a systematic metaphysician in the grand manner whose goal is to achieve an understanding of the nature of reality. Weiss' understanding of philosophy sets him immediately apart from the analytical, scientific and language-centered philosophy that became prevalent during his lifetime. Weiss is a metaphysical pluralist, substance-based (as opposed to the process philosophy of his teacher Whitehead) with a complex elaborate philosophical system that developed and changed in emphasis over the years. Weiss describes it as rooted in common sense and in everyday experience and in passing through it to ultimates. Weiss wrote many works of abstract metaphysics and also wrote books expanding his though to specific areas of human endeavor, including the arts, sports, and history. Weiss' Autobiographical Essay is difficult to read but helped me understand both the person and his thought.

Part Two of the book "Descriptive and Critical Essays on the Philosophy of Paul Weiss, with Replies" consists of twenty-eight essays each by a different scholar followed by Weiss' response. The essays are grouped into seven sections moving roughly from the most general to the more specific. Thus the essays are presented under the headings "Metaphysics" (7 essays): "Experience, Pragmatism, and Method" (7 essays); "Religion and Theology" (3 essays): "Logic" (2 essays);
"Ethics, Morality, and Politics" (3 essays); "Creativity and Art" (4 essays); and "Sport" (2 essays)

The essays differ substantially in approach and content and thus offer the opportunity to see different philosophical perspectives in addition to the perspective of Paul Weiss. Some of the essays are lucidly and simply written, making them easy enough to follow by readers with no particular background in Weiss' work. Other essays are difficult and more technical in character. The essays are worth reading for themselves. I enjoyed learning about many of the writers who participated in the volume, including John Laks, Nathan Rotenstreich, Jay Schulkin, Abner Shimony, Eugenio Benitez, and William Desmond, among others. Two of the contributors, Jackquelyn Kegley and Daniel Dombrowski, I have come to know from participation on panels.

Weiss' reply to each essay almost always opens with a complimentary, perceptive observation about the writer. His comments point out areas of agreement and disagreement with the writer of the essay, frequently dwelling on differences in philosophical perspective and approach. The format of essay and response clarifies Weiss' own approach to philosophy. More importantly, it allows the reader to engage with a variety of philosophical approaches and to become a reading participant in the discussion. Reading the volume offers a sustained experience with philosophy and the life of the mind. It also teaches lessons of how to disagree with courtesy and civility.

I was moved in reading through this volume and grateful for the opportunity to spend time with Weiss and with his distinguished interlocutors. There has been something of a revival of interest in metaphysics in philosophy of late which perhaps will lead to a renewed interest in Weiss. However, his thought is highly individual and deliberately idiosyncratic and probably will never have many followers. He and his work are still worth knowing. The book brought back memories of my own efforts in life with philosophy and with the value I have found in the philosophic quest.