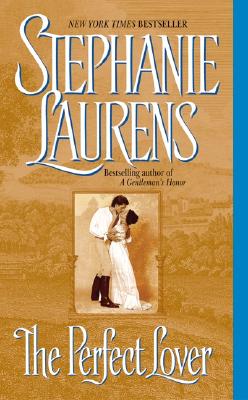 Simon Cynster has finally realised that it's time for him to settle down, and Lady Osbaldestone's house party seems like the perfect place to find a bride. But Portia Ashford is not what he had in mind. Read More

Simon Cynster has finally realised that it's time for him to settle down, and Lady Osbaldestone's house party seems like the perfect place to find a bride. But Portia Ashford is not what he had in mind. Read Less

All Editions of The Perfect Lover

And Then She Fell

The Designs of Lord Randolph Cavanaugh

The Pursuits of Lord Kit Cavanaugh

Say You Love Me

On a Wild Night

In this historical romance starring Cynster male #10 and his very own reluctant bride-to-be, a should've been delightful party is the setting for the "love" match between Simon Cynster and Portia Ashford.

When we met Simon in Book 1 Devil's Bride, he's visibly struggling to deal with his brother's death, dazedly seeking out his powerful cousin, the Duke (Devil) to help him deal, and Devil delivers, gently and patiently and keeps the poor kid calm and focused on the task of "always the gentleman". ("Make your bow.") Now he's all growed up, doing little more than bouncing from bed to bed, but ready for a family of his own.

Simon and Portia have known each other awhile, and his tendency to protect rankles her. Her reaction is understandable, considering they?re not blood relatives, thereby making what she does or doesn?t do, really none of his business. But apparently, he?s managed to make an ass of himself, and I'd cuss him out, too.

Portia wants babies and realizes that she must be married. Good girl. Add that to Simon's decision to follow in the footsteps of his formidable, older, dreamboaty cousins and it's a Cynster story, ya'll! The hitch in the get-along (besides all the hatin') is that she wants to know what it is that drives men and women to marriage. She needs to be tutored in sex by someone with experience and discretion.

Enter Simon. She'll overlook his rake reputation because she can trust him - he's pedigreed after all. The games start. Without informing her of his real interest in her as his wife, he's playing to convince her to get serious and consider him "husband", and she's just playing. So maybe he would be a good husband. But wait, maybe they can just have the baby. Maybe - Baby. Baby - Maybe. Wife or wifey? Wifey or wife? And it goes on and on like this for days.

It seems the only time they realize that their negative feelings have changed to NOT love, but concern (and that's what I get from it), is when Portia?s in danger. Which brings me to the murder. This, I figure, must be the plot, and as modestly as it?s written it?s welcome respite from the non-romantic sex. Even as they approached each sexual interlude they?ll still hatin' on each other.

Unless you count going from deep dislike to deep lust to, somehow, an apparent deep trust, there is no character development, but in spite of that they do get married (hey that's no spoiler! if you've read about one Cynster you've read about the next. they ALL get tired of being single, they ALL meet some woman who doesn't want to get married but they just got to have her, they ALL have some type of murder mystery to solve and they ALL marry that reluctant woman!) You don't get to know, witness, or understand how Simon and Portia get anywhere near an altar.

Perplexing development: Portia falls underwater with the murderer who plans to murder her and Simon, after deciding that she might not like his rescuing her because he thinks that she'd think that he was thinking that she can?t handle herself, declines to dive in after the "love of his life". Simon waits on shore - and she appreciates his consideration! NaziFeminism lives! Would have served them both right and been one hell of a book had she drowned!

About The Perfect Lover

"The Perfect Lover" by Stephanie Laurens is as exciting as all her other books! It has everything from romance to suspense and mystery. This book raises questions about what constitutes love and what compels them to get married. With Kitty's failing marriage raising doubts in Portia's mind on both of these counts, Simon has his hands full trying to persuade her to become his wife. But Simon does not realize just how much she means to him until assaults are done on her life, and he realizes that he can and will do anything to protect his 'perfect lover' and make her his own.
The heroine in this book is quite different in this sense that she is very independent and had no thoughts on love and marriage before, she only concentrated on academic stuff. However, Simon forces her to review her opinions and views on both cases. The most intriguing thing, though, is how Mrs. Therese Osbaldestone brings them together in the first place! She is a real genius on such matters!!