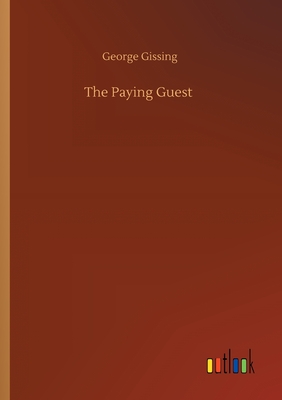 The Paying Guest George Gissing George Robert Gissing was born on November 22nd, 1857 in Wakefield, Yorkshire. He was educated at Back Lane School in Wakefield. Gissing loved school. He was enthusiastic with a thirst for learning and always diligent. By the age of ten he was reading Dickens, a lifelong hero. In 1872 Gissing won a scholarship to Owens College. Whilst there Gissing worked hard but remained solitary. Unfortunately, he had run short of funds and stole from his fellow students. He was arrested, prosecuted, found ... Read More

The Paying Guest George Gissing George Robert Gissing was born on November 22nd, 1857 in Wakefield, Yorkshire. He was educated at Back Lane School in Wakefield. Gissing loved school. He was enthusiastic with a thirst for learning and always diligent. By the age of ten he was reading Dickens, a lifelong hero. In 1872 Gissing won a scholarship to Owens College. Whilst there Gissing worked hard but remained solitary. Unfortunately, he had run short of funds and stole from his fellow students. He was arrested, prosecuted, found guilty, expelled and sentenced to a month's hard labour in 1876. On release he decided to start over. In September 1876 he travelled to the United States. Here he wrote short stories for the Chicago Tribune and other newspapers. On his return home he was ready for novels. Gissing self-published his first novel but it failed to sell. His second was acquired but never published. His writing career was static. Something had to change. And it did. By 1884 The Unclassed was published. Now everything he wrote was published. Both Isabel Clarendon and Demos appeared in 1886. He mined the lives of the working class as diligently as any capitalist. In 1889 Gissing used the proceeds from the sale of The Nether World to go to Italy. This trip formed the basis for his 1890 work The Emancipated. Gissing's works began to command higher payments. New Grub Street (1891) brought a fee of ???250. Short stories followed and in 1895, three novellas were published; Eve's Ransom, The Paying Guest and Sleeping Fires. Gissing was careful to keep up with the changing attitudes of his audience. Unfortunately, he was also diagnosed as suffering from emphysema. The last years of his life were spent as a semi-invalid in France but he continued to write. 1899; The Crown of Life. Our Friend the Charlatan appeared in 1901, followed two years later by The Private Papers of Henry Ryecroft. George Robert Gissing died aged 46 on December 28th, 1903 after catching a chill on a winter walk. We are delighted to publish this classic book as part of our extensive Classic Library collection. Many of the books in our collection have been out of print for decades, and therefore have not been accessible to the general public. The aim of our publishing program is to facilitate rapid access to this vast reservoir of literature, and our view is that this is a significant literary work, which deserves to be brought back into print after many decades. The contents of the vast majority of titles in the Classic Library have been scanned from the original works. To ensure a high quality product, each title has been meticulously hand curated by our staff. Our philosophy has been guided by a desire to provide the reader with a book that is as close as possible to ownership of the original work. We hope that you will enjoy this wonderful classic work, and that for you it becomes an enriching experience. Read Less

All Editions of The Paying Guest

Letters of George Gissing to Members of His Family

Our Friend the Charlatan

The still underappreciated novelist George Gissing (1857 - 1903) is best known for his books cast in the three-volume Victorian mold, such as "New Grub Street". Gissing's books explore themes of class structure, commercialism, love, and failure. In 1895, Gissing temporarily abandoned the three-volume convention and published three short, highly readable novels: "Eve's Ransom", "Sleeping Fires" and the book under review, "The Paying Guest", each of which offers a distinctive approach to Gissing's characteristic themes. Of the three books, "Eve's Ransom" is one of Gissing's best works. The other two are good but less significant. I have been enjoying revisiting Gissing by rereading these three short works of 1895 and by reviewing them here on Amazon with the hope of interesting other readers in exploring Gissing.

"The Paying Guest" is unusual among Gissing's output in its lightness of touch and in its comedy. The book tells of the encounter of a rising middle-class suburban British family with a young girl, caught between two suitors, of a distinctly different background. Clarence Mumford, age 35, and his wife Emmeline, just under 30, live in rural Sutton in a home they call "Runnymede", about 15 miles from London with their two-year old son and their three domestics. In order to secure supplemental income, they advertise for a boarder, a "paying guest". The guest they receive will soon disrupt their peaceful routines.

Louise Derrick is a young woman of 22 with no education. no skills, a temper, and a taste for frivolity. She is looking for a place to live due to difficulty with her mother, with her stepfather, Higgins, and with her stepsister, Cecily Higgins, age 26. A young man named Bowling is courting Cecily Higgins, but he appears to prefer Louise. Higgins wants Louise to leave home and agrees to pay her expenses to avoid discord between Louise and Cecily and to allow Bowling's courtship of Cecily to proceed forward without a rival for his attentions. Besides Bowling's interest, Louise is also being courted by a man named Cobb, a working-class person with a good income and prospects. Cobb has a rough, possibly violent, disposition and his courtship of Louise is a stormy, on-again, off-again affair. Louise does not seem to know her own mind but wants to marry. With some trepidation, the Mumfords accept Louise as a boarder.

Louise's temper, what the Mumfords perceive as her vulgarity, and her attempts to draw the Mumfords into her relationship with her family and with Cobb lead to discord between the couple. They repent of their paying guest and try to find a tactful way to get her to leave. As the story develops, Louise has a private meeting with Mumford at Mumford's railway commuting station which provokes jealousy in Mrs. Mumford. Louise, thinking that Bowling's relationship with Cecily is at an end, encourages his matrimonial advances. Cobb pays an unannounced visit to Runnymede to pursue Louise and, as a result of a foolish accident, sets the drawing room of the home on fire, resulting in an injury which leaves Louise bed-ridden for several weeks. Mrs. Mumford, in her refinement, and Mrs Higgins, in her vulgarity, exchange pleasantries which ends forever Louise's stay in the house. Ultimately, Cobb winds up with Louise, with an uncertain future in store, and the Mumfords try to piece together their domestic life.

The humor of the book results from the interaction between the Mumfords, with their snobbery and attempted refinement, and their well-meaning but foolish boarder Louise, and with her mother, stepfather and Cobb. In its portrayal of the effects of class and money on human relations, this book offers a short, upbeat introduction to Gissing's themes. Gissing's portrayal of women is among the strongest features of his work, and his novels frequently, as in "The Odd Women" address issues involving feminism. By portraying Louise in her shallowness in "The Paying Guest" Gissing stresses the need for expanding educational expectations for women if men and women are to have full intimate and rewarding lives together. The book can be read in a single sitting. While far from the best of Gissing, this book is enjoyable. With its two companion novels of 1895, especially the outstanding "Eve's Ransom", the book offers a good short introduction to Gissing for the newcomer. Readers who love the Gissing of "New Grub Street", "The Odd Women", or "Born in Exile" will gain a broader understanding of the author from these too-little known books in a shorter, more modern format.