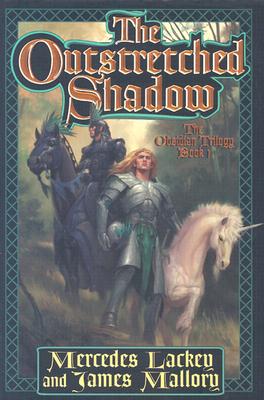 In this first title in bestselling author Mercedes Lackey's Obsidian Trilogy, we see that the Demons have been biding their time deep in Obsidian Mountain since their defeat in the last great War. Very soon now, when the Demons rise to make war, there will be no alliance between High and Wild Magic to stand against them. Read More

In this first title in bestselling author Mercedes Lackey's Obsidian Trilogy, we see that the Demons have been biding their time deep in Obsidian Mountain since their defeat in the last great War. Very soon now, when the Demons rise to make war, there will be no alliance between High and Wild Magic to stand against them. Read Less

All Editions of The Outstretched Shadow

The Hills Have Spies

The Outstretched Shadow, The Obsidian Trilogy, 1

Kellen Tavadon begins as a seventeen year old student of High Magic, (the only accepted form of magic practiced), that rebels against his father, (the Arch-mage of the High Council of Mages, and the Arch-mage of the ruling Council of Armathelieh), and his teachings and principles. (Along with the reader,) Kellen will make many shocking discoveries as he grows up and matures.
The mages of Armathelieh feed on the citizen?s talismans, (that store power), in order to continue their practice of High Magic. Armathelieh is completely closed off from the outside world. The mages also teach that women cannot be mages, and erase their memories when they show signs of magical ability.
Three books of Wild Magic find Kellen. He secretly studies, learns, and practices from them, without his father?s knowledge. In order for a spell of Wild Magic to work, the mage must be willing to pay a price. Kellen is burdened by his father?s warnings that Demons were mages who once practiced Wild Magic.
He finds Kellen?s magically hidden books, and Kellen is brought before the Council to answer for his actions. Thirsty for knowledge of the world outside the walls of Armathelieh, Kellen?s response gets him disowned, exiled, and hunted down by golem hunting dogs, to be killed.
Still unsure of if he should trust in and use the Wild Magic; Kellen turns to it to escape the murderous trap of Armathelieh. Kellen must pay a price for his spell. He must remain celibate for one year, and the talking unicorn, (I thought was weird at first, but you get use to it), will help him to cross the borders of Armathelieh?s land.
Shalkan, (the talking unicorn), brings Kellen to his sister, who he did not know he had. Joined by their hatred against their father, Kellen accepts Idalia. She teaches him how to survive in the Wildwood. She also teaches him the principles and practice of Wild Magic.
Queen Savilla has a plan to conquer the Bright Lands, and her spy in Armathelieh will set that plan into motion. Armathelieh extends its borders further, in order to hunt and kill the Arch-Mage?s children. When the golem hunting dogs do not return, Kellen?s escape from death is an embarrassment his father cannot accept as Arch-Mage. He would be seen weak by the other twelve members of the Council.
Kellen and Idalia travel to the Elven Lands, to escape Armathelieh?s desperate border reach. Idalia has a past with the Elves, and Kellen begins a new education with their strange customs and the land?s history.
There was a Great War in the far, distant past against Demons and Elves. Humans joined with the Elves against the Demons and Dragons. At a very high cost of thousands of lives lost, the Demons were driven back to the World Without Sun.
The Elven Land is dying from a long drought, and Idalia discovers that it is being caused by powerful magic from Shadow Mountain.
Kellen and the Elf Knight, Jermayan journey to Shadow Mountain so that Kellen may perform the necessary Wild Magic spell on his own to save not only the Elves but also all the Bright Lands. Alternatively, will Kellen fall to the compelling temptations of Queen Savilla, joining her by practicing Wild Magic and refusing to pay the price? Is the price higher than what Kellen is willing to pay, in order to put an end to the Endarken?s outstretched shadow?