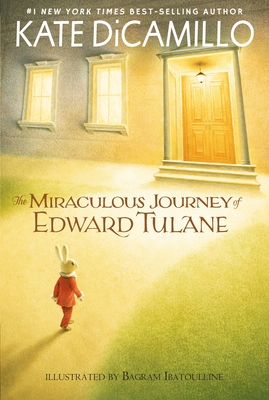 The Miraculous Journey of Edward Tulane

Edward Tulane, a cold-hearted and proud toy rabbit, loves only himself until he is separated from the little girl who adores him and travels across the country, acquiring new owners and listening to their hopes, dreams, and histories. Read More

Edward Tulane, a cold-hearted and proud toy rabbit, loves only himself until he is separated from the little girl who adores him and travels across the country, acquiring new owners and listening to their hopes, dreams, and histories. Read Less

All Editions of The Miraculous Journey of Edward Tulane

The Tale of Despereaux: Being the Story of a Mouse, a Princess, Some Soup and a Spool of Thread

Flora and Ulysses: The Illuminated Adventures

The One and Only Ivan

The Cricket in Times Square

Tale of Despereaux: Being the Story of a Mouse, a Princess, Some Soup, and a Spool of Thread

Edward has many names & finally has many feelings.

A beautifully made china rabbit, given to Abilene Tulane by her grandmother, Pellegrina, was more a friend then a doll. The rabbit was given the name of Edward, had special silk pajamas and clothes made just for him, he even had his own pocket watch so that he would be able to tell when Abilene was coming home to him everyday. Edward Tulane was a spoiled little china rabbit and didn't realize how much he took for granted. During a family vacation, Edward fell overboard and began his ?Miraculous Journey?. Edward spent his time at the bottom of the sea, living with a fisherman, in a garbage dump, traveling with a hobo, standing as a scarecrow, being loved by a dying child, dancing for another child then landing broken in a doll repairman?s shop. Finally after so much had happened, he had learned what is was to love and that he had been loved by so many. Heartbroken and determined to never love again, he waited.

This is an interesting story about the travels of one china rabbit. It is a cute story with short chapters that are easily read out loud or by a 8+ year old. To follow Edward around and watch as he changes and finally realizes how great of a life he had with Abilene is a gentle way to point out how great something can be even if you don?t realize it now, you might appreciate it later. Cute story, kids enjoyed it too, touching parts and sad parts, best part (according to the kids) is the dream like segment with all the people that Edward loves. Most kids books have a moral, this one is a bit difficult to explain but it does come across, love, love lost and love found again.

A very charming story. I was really affected simply because I was one of those children who worried about hurting my stuffed animal's feelings if they didn't get equal attention and this story gives the animal's side of the story. And, as with most children's books, there is a lesson attached. I don't have any children myself but was attracted to the premise. Loved the art work in the book as well, it gives it a nice antique type feel. I would recommend it for all ages and see it as a good book to be read aloud to older children.

Read this book with your children

I bought this book at the request of my 11 year old daughter. She read the book on her own and then one evening she asked me to read to her from the book for a 'bedtime story'. I intended to read a chapter or two but found that I couldn't put the book down. My daughter went to sleep a little later than usual that evening as I ended up reading the book right up to the end. Need I say more? A truly touching and inspiring story!

This book was the reader's pick from
my own public library.
This book is geared toward children, but
it is truly a wonderful read for young and old
alike.
This book is richly entertaining, and gives
a life's lesson on love. A quality (in Edward's case)
that shouldn't be taken for granted.
This is a can be a magical sharing between parent and child.