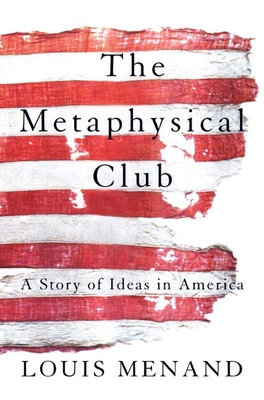 The Metaphysical Club: A Story of Ideas in America

A riveting, original book about the creation of the modern American mind. The Metaphysical Club was an informal group that met in Cambridge, Massachusetts, in 1872, to talk about ideas. Its members included Oliver Wendell Holmes, Jr., founder of modern jurisprudence; William James, the father of modern American psychology; and Charles Sanders Peirce, logician, scientist, and the founder of semiotics. The Club was probably in existence for about nine months. No records were kept. The one thing we know that came out ... Read More

A riveting, original book about the creation of the modern American mind. The Metaphysical Club was an informal group that met in Cambridge, Massachusetts, in 1872, to talk about ideas. Its members included Oliver Wendell Holmes, Jr., founder of modern jurisprudence; William James, the father of modern American psychology; and Charles Sanders Peirce, logician, scientist, and the founder of semiotics. The Club was probably in existence for about nine months. No records were kept. The one thing we know that came out of it was an idea - an idea about ideas. This book is the story of that idea. Holmes, James, and Peirce all believed that ideas are not things "out there" waiting to be discovered but are tools people invent - like knives and forks and microchips - to make their way in the world. They thought that ideas are produced not by individuals, but by groups of individuals - that ideas are social. They do not develop according to some inner logic of their own but are entirely dependent - like germs - on their human carriers and environment. And they thought that the survival of any idea depends not on its immutability but on its adaptability. 'The Metaphysical Club' is written in the spirit of this idea about ideas. It is not a history of philosophy but an absorbing narrative about personalities and social history, a story about America. It begins with the American Civil War and ends with World War I. This is a book about the evolution of the American mind during the crucial period that formed the world we now inhabit. Read Less

All Editions of The Metaphysical Club: A Story of Ideas in America

The Free World: Art and Thought in the Cold War

The New Yale Book of Quotations

Dialogue with Death: The Journal of a Prisoner of the Fascists in the Spanish Civil War

How Ideas Matter In America

Louis Menand's "The Metaphysical Club" is a rare book which manages to be both scholarly and popular. As a popular work, it offers an accessible exposition of complex ideas and thinkers. On a more scholarly level, the book succeeds because it awakens in the reader an appreciation of the scope of intellectual life in the United States and a desire to understand and to perpetuate it.

The key figures in "The Metaphysical Club" include the great American jurist Oliver Wendell Holmes and the philosophers William James, Charles Peirce, and John Dewey. They were the basic American practitioners of a philosophy called pragmatism, which teaches that ideas are tools to be used to accomplish a purpose rather than abstractions which mirror to greater or lesser accuracy some independent reality.

Menand examines each figure in light of his family life (Holmes, James, and Peirce all were products, in their different ways, of homes were ideas mattered; Dewey less so), temperament, reading, and educational and cultural background. He places a great deal of emphasis on the American Civil War as a basis, with his protagonists, for rejecting absolutistic views of principle and reality. An uncompromising commitment to absolutes led, for post Civil War thinkers, to the War and its carnage. This is an important historical claim and it works very well in the case of Oliver Wendell Holmes. I am not sure how convincing it is as an explanation of the thought of the other three figures. William James wrote an important essay "The Moral Equivalent of War" unmentioned in Menand's book, which concerns the apparent inability of modern life to find values to move the heart and spirit as the heart and spirit were moved in the passion of war. In other words, James, at least, was searching for values, and perhaps even for absolutes, rather than expressing a skepticism towards them.

In addition to placing pragmatism in the context of the post Civil War era, Menand places great emphasis on the development of modern science, particularly Darwin's theory of evolution and statistical theory. These developments, for Menand, tended to discourage a view of the universe as fixed, rational, and purposeful. Knowledge became tied closely to theories of statistical generalization and theory of error, with an emphasis on what worked. Scientific theory in fact gets a larger place in the book than does the Civil War as a basis for the development of pragmatism and I think deservedly so.

Menand stresses how intellectual development in the United States was tied to racial theories and to other theories such as spiritualism that we find markedly out of place today. This is not a new story, but it is well told and does show something important about how ideas we value can emanate from teachings we would reject or find strange.

In addition to the four primary figures, Menand discusses many other philosophers and thinkers, predecessors, successors, and colleagues to Holmes, James, Peirce, and Dewey. The title of the book is based on an almost legendary "Metaphysical Club" that met all-too briefly in the 1870's under the auspices of Chauncey Wright, the "Cambridge Socrates". Ideas and intellectual life flourish briefly and quietly, but they may illuminate people's lives for times to come.

The book is chatty in tone with many digressions on matters such as the Dartmouth College Supreme Court case, the Pullman Strike, Jane Addams and Hull House, and Louis Agassiz's expedition to Brazil. The digressions make it hard at times to keep to the thread of the narrative, but they do cast light on the era and on the development of thought in the United States.

The book does not expound in detail the thought of its principal characters. For that the reader will need to turn to texts, and the book encourages him or her to do just that. Menand is not overly critical or analytical about the success of pragmatism. He points out that the later Civil Rights Movement in America could not have succeeded with pragmatism as a base but rather required a commitment to principle and absolutes found more in other writers.

Pragmatism is a distinctive achievement of thinkers in the United States. This book teaches about it well and, perhaps not entirely consistently with the theory of pragmatism itself, promotes respect for the role of ideas in our country and for the value of the life of the mind.

This book is very well-written and engaging. I read it because I am part of a book club. The topic wouldn't have been my first, or second, choice but I enjoyed it and learned nonetheless.