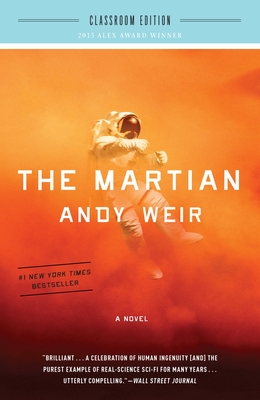 I'm stranded on Mars. I have no way to communicate with Earth. I'm in a Habitat designed to last 31 days. If the Oxygenator breaks down, I'll suffocate. If the Water Reclaimer breaks down, I'll die of thirst. If the Hab breaches, I'll just kind of explode. If none of those things happen, I'll eventually run out of food and starve to death. So yeah. I'm screwed. Read More

I'm stranded on Mars. I have no way to communicate with Earth. I'm in a Habitat designed to last 31 days. If the Oxygenator breaks down, I'll suffocate. If the Water Reclaimer breaks down, I'll die of thirst. If the Hab breaches, I'll just kind of explode. If none of those things happen, I'll eventually run out of food and starve to death. So yeah. I'm screwed. Read Less

All Editions of The Martian

The Fault in Our Stars

You might think that reading about a person living in a rover for 550 days could get boring, but no, this book was absolutely gripping. Watney was very resourceful, and the book does a good job of explaining the scientific approach to his problems. In a sense the book is a bunch of puzzles: this went wrong and how can it be fixed? The sense of tension remains high throughout the book because something always goes wrong, and when it does I always found myself rooting for Mark to pull through. Over all it was a very entertaining book.

Interesting novel, kept me involved from the start, ending was good, overall an excellent novel. enjoyed it immensely. thanks

Exciting Novel, But Get a Dictionary!


If a non-sci fi buff sees that title, they may imagine Martians arriving to Earth to create problems or even remember an echo of a film with a similar premise - Robinson Crusoe on Mars - but not so!

The book is written in a diary format for the first 300 pages or so, with occasional flashbacks for the reader to catch up. Mark Watley was left for dead during a terrific sandstorm while he and his crew abandoned the site and headed back to Earth.

Mark got very lucky. He is irascible, has quite the potty mouth and has a hatred for disco. With all that, it's admirable his fight to survive, every decision a matter of life or death, on a planet with below zero temperatures and an atmosphere that is extremely unbreathable.

Really liked this story. The break-down of his day to day was hilarious. "Today I f*cked up. Sh*t" runs throughout the book. Through Mark we meet his commanding officer Lewis, and his other NASA astronauts.

The remaining part of the book involves NASA as they prepare Mark's funeral, Commander Lewis chewing up the scenery as she depressingly realizes she's abandoned Mark to the Mars desert. And the media and world at large caught up in the story.

I think the best part of the book is Mark's attempt at making food. NASA left a few potatoes so they would have real rather than reconstituted food. He then mixes Martian dirt with his own, uhm, fertilizer, and has a regular farm in the "Hab."

I was taken aback by a lot of the technical words in this novel. The author is a science/math nerd and it shows. I did a search and found several blogs that define many of these words. I even found on Google Maps a map of Mars to follow Mark's travels!

It's interesting, the author's take on the bureaucracy of the NASA people and how some of them really have an attitude problem. This part of the story was a bit tedious to read. At least no soap opera!

The ending was quite abrupt. Some may like that, or maybe the author ran out of ideas. This is the guy's second novel he's ever written and already he gets movie rights! I want more. And I want NASA to make fiction a reality and get some guys up there!

Terrific read. Really enjoyed it. Rivetting. The wife read it after me, and couldn't put it down. What a book. Ace.