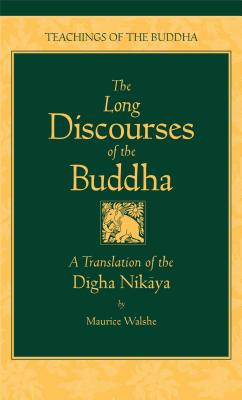 The Long Discourses of the Buddha: A Translation of the Digha Nikaya

Buddhist Symbols in Tibetan Culture: An Investigation of the Nine Best-Known Groups of Symbols

The Flower Ornament Scripture: A Translation of the Avatamsaka Sutra

This book is a modern translation of the Long Length Discourses of the Buddha, a seminal collection of early Buddhist texts. The Digha Nikaya is part of the scripture of the Theravada school of Buddhism. The Theravada school is is the oldest surviving form of Buddhism and is still practiced in Sri Lanka, Thailand, Burma, and elsewhere. Together with other forms of Buddhism, Theravada has attracted a great deal of interest in the West, and this book will be invaluable in making its teachings accessible. This collection of discourses is considered canonical by all other schools of Buddhism. Subsequent understanding of the Buddha's teachings built upon it, even when they seemed to depart from it.

The Digha is a collection of 34 discourses (suttas), originally written in Pali. The form of the teaching differs from that of later Buddhist teachings in that in the Digha, the Buddha is presented as a person wandering through India and teaching his disciples, followers of other sects, kings, princes, gods, and anyone who is open to listen. The teachings are difficult but the emphasis in this collection is on psychology more than metaphysics. The Buddha described his dhamma as designed to end suffering and to teach people how to be happy. That is the core of this volume.

Many scholars believe that the Digha was written specifically to introduce the Buddha's teaching to lay followers. Most (but not all) the suttas in the collection involve discussions between the Buddha and various lay people or followers of other sects. The suttas in the collection include a great deal of mythology and story-telling. These factors, together with the content of the discourses, tend to show it was designed for a large audience, rather than only for close followers of the Buddha's teachings. They remain an outstanding source for those wanting to make a serious effort to study the Buddha.

Many of the Suttas in the collection present important expositions of the Buddha's dhamma (teaching). The first sutta in the collection, translated here as "What the Teaching is Not" is basic but difficult. The reader coming to the Digha might want to begin with the second sutta, "The Fruits of the Homeless Life". This sutta is widely studied and is a beautiful exposition of the Buddha's teaching and its value.

Sutta 15 of the collection, the "Great Discourse on the Origination" is the most detailed single discussion in the Pali Canon of the Buddha's fundamental and uncompromisingly difficult teaching on dependent origination -- impermanence, selflessness, and interconnectedness. Sutta 22, "The Greater Discourse on the Foundation of Mindfulness" is the basic meditation sutta which should be studied by those wishing to develop a meditation practice. Sutta 16, the longest sutta in the Pali Canon, tells the story of the Buddha's last days and of his passing. In it the Buddha exhorts his followers to "strive on with diligence" to achieve their goal of enlightenment. Sutta 31, the Sigala Sutta, differs markedly from the remaining suttas in the collection in that it consists of the Buddha's rather worldly advice to a worldly young man.

I have the good fortune to belong to a Sutta Study group led by an able teacher where for the past year or so (the group has been meeting much longer) we have explored this collection in depth. We generally have one person assigned to lead the discussion of a Sutta (our group averages about ten) and we all read and discuss it over a two-hour session. (The longer, more difficult suttas require several sessions.) This is an ideal way to study the text. If such a group is unavailable to you, the best way to proceed, I think, is to read the collection slowly -- do not try to rush or to do it at once -- concentrate on the sections that seem to speak to you and go back to them. This is a text that is not meant to convey history or dogma but to encourage reflection, meditation and study.

The translation of the text is by Maurice Walshe, a scholar and a distinguished Buddhist lay practitioner who also translated the works of the Christian mystic, Meister Eckhardt. Walshe wrote a useful introduction covering key Buddhist concepts, a summary of each sutta, and brief notes. His translation is homespun, colloquial, and accessible. It serves its function of allowing the reader to approach the text and the Dhamma.