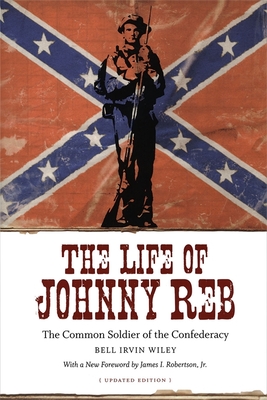 The Life of Johnny Reb: The Common Soldier of the Confederacy

When Bell Irvin Wiley's composite portrait of the rank-and-file Confederate soldier was published in 1943, professional historians and general readers alike greeted it enthusiastically. Over a half century later, the book still offers one of the best available accounts of the ordinary citizens who made up the Confederate army. THE LIFE OF JOHNNY REB provides an intimate history of a soldier's daily lifethe songs he sang, the foods he ate, the hopes and fears he experienced, the reasons he fought. Wiley examined countless ... Read More

When Bell Irvin Wiley's composite portrait of the rank-and-file Confederate soldier was published in 1943, professional historians and general readers alike greeted it enthusiastically. Over a half century later, the book still offers one of the best available accounts of the ordinary citizens who made up the Confederate army. THE LIFE OF JOHNNY REB provides an intimate history of a soldier's daily lifethe songs he sang, the foods he ate, the hopes and fears he experienced, the reasons he fought. Wiley examined countless letters, diaries, newspaper accounts, and official records to construct this frequently poignant, sometimes humorous account of the life of Johnny Reb. In a new foreword for this updated edition, Civil War expert James I. Robertson, Jr., explores the exemplary career of Bell Irvin Wiley, who championed the common folk, whom he saw as ensnared in the great conflict of the 1860s. "This book deserves to be on the shelf of every Civil War modeler and enthusiast. Read Less

All Editions of The Life of Johnny Reb: The Common Soldier of the Confederacy

The Life of Billy Yank: The Common Soldier of the Union

Fighting for the Confederacy: The Personal Recollections of General Edward Porter Alexander

A Pioneering Study Of The Confederate Soldier

Bell Irvin Wiley (1906-1990), a scholar of the American Civil War, is best known for his two early books describing the lives of common soldiers in the Union and Confederate Armies. His book, "The Life of Johnny Reb" appeared in 1943 and was followed in 1952 by its companion volume "The Life of Billy Yank". At the beginning of his career, Wiley tended to concentrate on the Confederate War effort and wrote his book on "Billy Yank" as a result of the fascination he developed from writing his initial work with the common soldier. Ironically, Wiley's book on "Billy Yank" is the stronger of the two in terms of detail, organization, factual material, and analysis. His book on the Confederate soldier remains an important effort, essential to understanding the Southern Civil War experience.

In the Preface to his book, Wiley points out the fascination that the campaigns and personalities of Lee, Jackson, Stuart, and other Southern leaders exert (and continue to exert) on students of the Civil War. He aimed in his book to discuss the life of the soldier "as it really was" including among much else "how the hungry private fried his bacon, baked his biscuit, smoked his pipe". His book succeeds in that aim. Wiley's book gave me a good picture of life in the Southern Army with all its privations and hardships. He does not romanticize his subject or, for all his affection for the Southern soldier, fall prey to "Lost Cause" mythology.

The book opens with a discussion of the enthusiasm of the Southern soldier during the early stages of the War -- largely resulting from the conviction that the War would be short and that the Yankees would go home. He discusses how the dream of a short, decisive conflict quickly faded and how the troops were left with the dangerous, boring, and dehabilitating business of soldiering. Some men continued throughout with their convictions and enthusiasm but for most the War became something that could not end soon enough.

Wiley gives good pictures and stories of the tedium of life in the camps during the winter and during the long periods when the armies were not in combat or on the march. He describes the bad food, shoddy clothes, and low pay that were the lot of the Confederate soldier. He discusses the various ways the troops spent their time. ranging from the sins of gambling, drink, and vice to the repeated attempts at religious revivals. Wiley is sensitive to the instances of cowardice and fear in the Confederate war effort but he rightly praises the valor and courage, overall, of the Confederate soldier. They fought tenaciously and hard. Wiley discusses the loneliness of soldier life as the men in the lines went to great efforts to write letters home and thought of their wives and sweethearts.

I thought Wiley's discussion of the unsanitary conditions of the camps and the toll taken by disease and poor medical treatment among the best sections of the book. He also discusses well the ambivalent relationships that frequently developed between Johnny Reb and his enemy in blue. Although it became a total and brutal combat, the Civil War was marked by attempts at fraternization, and what later writers have termed the "brotherhood of men at arms." The feelings the combatants developed for each other became important in the reconciliation efforts following this devastating conflict. Wiley also offers a good discussion of the various types of shoulder arms used by the Southern troops during the war, their manufacture, and their limitations.

There is a great deal of anecdotal material in this book. The text is repetitive at times. But this book and its companion volume remain essential Civil War reading and will give the student a feel for life in the lines.