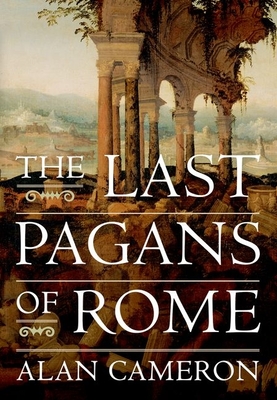 The Last Pagans of Rome

Rufinus' vivid account of the battle between the Eastern Emperor Theodosius and the Western usurper Eugenius by the River Frigidus in 394 represents it as the final confrontation between paganism and Christianity. It is indeed widely believed that a largely pagan aristocracy remained a powerful and active force well into the fifth century, sponsoring pagan literary circles, patronage of the classics, and propaganda for the old cults in art and literature. The main focus of much modern scholarship on the end of paganism in ... Read More

Rufinus' vivid account of the battle between the Eastern Emperor Theodosius and the Western usurper Eugenius by the River Frigidus in 394 represents it as the final confrontation between paganism and Christianity. It is indeed widely believed that a largely pagan aristocracy remained a powerful and active force well into the fifth century, sponsoring pagan literary circles, patronage of the classics, and propaganda for the old cults in art and literature. The main focus of much modern scholarship on the end of paganism in the West has been on its supposed stubborn resistance to Christianity. The dismantling of this romantic myth is one of the main goals of Alan Cameron's book. Actually, the book argues, Western paganism petered out much earlier and more rapidly than hitherto assumed. The subject of this book is not the conversion of the last pagans but rather the duration, nature, and consequences of their survival. By re-examining the abundant textual evidence, both Christian (Ambrose, Augustine, Jerome, Paulinus, Prudentius) and pagan (Claudian, Macrobius, and Ammianus Marcellinus), as well as the visual evidence (ivory diptychs, illuminated manuscripts, silverware), Cameron shows that most of the activities and artifacts previously identified as hallmarks of a pagan revival were in fact just as important to the life of cultivated Christians. Far from being a subversive activity designed to rally pagans, the acceptance of classical literature, learning, and art by most elite Christians may actually have helped the last reluctant pagans to finally abandon the old cults and adopt Christianity. The culmination of decades of research, The Last Pagans of Rome overturns many long-held assumptions about pagan and Christian culture in the late antique West. Read Less

All Editions of The Last Pagans of Rome

Callimachus and His Critics

Claudian: Poetry and Propaganda at the Court of Honorius

The Barbarians Speak: How the Conquered Peoples Shaped Roman Europe

The Fate of Rome: Climate, Disease, and the End of an Empire

The Race for Paradise: An Islamic History of the Crusades

The World Between Empires: Art and Identity in the Ancient Middle East

A Layman Reads "The Last Pagans Of Rome"

Alan Cameron's "The Last Pagans of Rome" is a large-scale, learned study of the relationship between Christians and pagans in the late Fourth Century A.D. of the Roman Empire. I was interested in this book because of the insight I thought it would offer on religion and change. I have read and learned from many authors who were deeply read in and influenced by ancient history. I have myself a working knowledge of ancient philosophy but, alas, little knowledge of ancient history. I am familiar with popular culture and the tendency in some people in a post-religious age to view Christianity unfavorably in comparison with the paganism it displaced. An example of this tendency, I think, is the recent movie, "Agora" which has a marginal relationship to the themes of this book.

Cameron's book helped me a great deal with my questions and interests and did more. A leading and extensively published classical scholar, Cameron is Charles Anthon Professor Emeritus of Latin at Columbia University. With its detail, erudition, and consideration of many sources and competing points of view, the book will be difficult for generalists such as myself. The more a reader brings to the book in terms of prior knowledge of the period, the better will be the understanding. Yet, the book will reward the effort required to read it. I found a recent review of Cameron's book by Peter Brown, Professor of History at Princeton, titled "Paganism: What We Owe the Christians" helpful to my reading. Brown's review appears in the April 7, 2011, New York Review of Books, p.68.

In 312 A.D., the Roman emperor Constantine converted to Christianity. The "last pagans of Rome" for Cameron, are the nobles of late fourth-century Rome. Cameron is much more concerned with scholarship than with popular culture familiar to most readers. In much scholarship, the last pagans of Rome are portrayed romantically as mounting a heroic, last-stand attack on the Christianity which would come to dominate the West. They spoke in favor of tolerance, resisted persecution, defended their beliefs with passion, and preserved Latin and Greek texts for posterity. Cameron makes a sustained analysis of this view of the late pagans and of the historical record on which it rests. He concludes that this portrayal of the late pagans needs to be rejected almost in its entirety. In his Introduction, Cameron writes: "[t]he main focus of much modern scholarship has been on [the last pagans] supposedly stubborn resistance to Christianity. Rather surprisingly, they have been transformed from the arrogant, philistine land-grabbers most of them were into fearless champions of senatorial privilege, literature lovers, and aficinados of classical (especially Greek) culture as well as the traditional cults. The dismantling of this romantic myth is one of the main goals of this book." (p.3)

The book has both a positive and a negative goal. Let us move from the Introduction to the final paragraph of Cameron's lengthy concluding chapter to get a better focus on the book. Cameron concludes:

"It might seem that much of the argument of this book has been negative. There was no pagan revival in the West, no pagan party, no pagan literary circles, no pagan patronage of the classics, no pagan propaganda in art or literature, no pagans editing classical texts, above all, no pagan last stand. But all these apparent negatives actually add up to a resounding positive. So many of the activities, artifacts, and enthusiasms that have been identified as hallmarks of an elaborate, concerted campaign to combat Christianity turn out to have been central elements in the life of cultivated Christians. This is the one are in which paganism (defined as the Roman tradition, Rome's glorious past) continued to exercise real power and influence on men's minds. Despite the best attempts of Augustine and other rigorists, the Roman literary tradition played a vital and continuing role in shaping the thought-world of Christians, both at the time and in the centuries to come." (p. 801)

In the long book between the introduction and the conclusion, Cameron examines various strands of the story of a pagan last stand. Only one, or perhaps two, chapters offer a chronological historical narrative. In chapter 2, Camerion examines the activities of the Roman Emperors between Constantinus and Theodosius to conclude that paganism was rapidly disappearing on its own and was effectively doomed when public subsidies of the state cults were withdrawn in 382 A.D. In chapter 3, Cameron examines the battle at the Frigidus river in 394 A.D. which some scholars have seen as a valiant military last stand of paganism. Cameron raises searching questions about this understanding of the battle.

The lengthy remainder of the book examines literary and artistic productions, revivals of ancient learning, histories, texts, inscriptions by pagans and Christians in late fourth century Rome to determine the extent of a late pagan revival and of claimed resistance to Christianity. Cameron's analysis requires a meticulous knowledge and review of texts and of the work of many prior historians which will be unfamiliar to all but scholarly readers. Broadly speaking, Cameron finds no basis for a claim to a late pagan renaissance.

In making his negative case, Cameron also teaches an important positive lesson. He points out that both pagans and Christians varied in the intensity of their beliefs from the "rigorists" -- mostly scholars and clerics-- to middle of the road believers both Christian and pagan. Most people on either side could meet, regardless of their religious differences, in a common culture which Cameron equates roughly with contemporary secularism. In other words, Christians could and did revere the Greek and Roman classics while rejecting the pagan religions, gods, cults, sacrifices that are recounted in these classics. Similarly, pagans could work towards the preservation of the invaluable, precious parts of Roman and Greek culture without necessarily committing themselves to paganism.
Cameron argues that the heritage of ancient Greece and Rome was cultural rather than religious. It became the common property of both Christians and pagans in late antiquity and of posterity, for which we should all be grateful. It is this story of culture and the life of the mind that was passed from the ancient Greeks and Romans to the modern world by both pagans and Christians, part of both groups and yet independent of them. This cultural achievement of the ancient world was remarkable in itself and, in Cameron's account, I think, remains an ideal and model for a difficult, different modern world.

Scholarly and detailed, this work will require effort by lay readers. But Cameron's book is a treasure of thought, history and scholarship. Lay readers who are interested and persevere will find this book rewarding. The book is published by Oxford University Press.