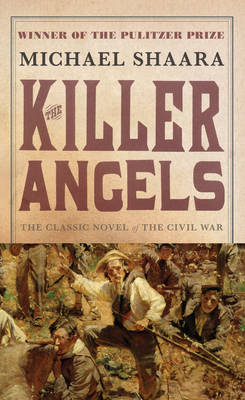 The Killer Angels: The Classic Novel of the Civil War

The Battle of Gettysburg was fought for two dreams-- freedom, and a way of life. Memories, promises, and love were carried into the battle but what fell was shattered futures, forgotten innocence, and crippled beauty. Read More

The Battle of Gettysburg was fought for two dreams-- freedom, and a way of life. Memories, promises, and love were carried into the battle but what fell was shattered futures, forgotten innocence, and crippled beauty. Read Less

All Editions of The Killer Angels: The Classic Novel of the Civil War

The Killer Angels: A Novel of the Civil War

For Love of the Game

The Last Full Measure: A Novel of the Civil War

The Classic Novel Of Gettysburg

Although it won the Pulitzer Prize for fiction in 1975, Michael Shaara's novel "The Killer Angels" (1974) was little-noted when it first appeared. The stature of the book has grown with time. It was used in a television series of the Civil War and in a movie version of the Battle of Gettysburg. The novel has been criticized on various grounds. Sharra's factual account of the battle and the importance he ascribes to Little Round Top can be challenged. Shaara focuses too much on the high command of the two armies and gives too little attention to the soldiers in the ranks. Shaara minimizes the importance of slavery to the conflict. For all these criticisms, this book remains a moving account of Gettysburg. It will continue to introduce many Americans to the Battle and encourage them to reflect and get beyond some of the factual limitations of the book. The book is taught in history and literature classes and properly so as it introduces new generations of Americans to their history. It has also appeared in this relatively new Modern Library edition to replace the old dog-eared paperback. The remainder of this review is drawn primarily from the review I wrote some time ago of the earlier edition.

This is an outstanding work of historical fiction. The book deserves the praise it has received. There is much more to this novel than can be captured in any movie or TV series on the Civil War. The book is a fitting introduction to the Civil War and to the Battle of Gettysburg. The book illustrates a lesson too easily forgotten --how fiction, creatively done, has the power to give meaning to fact.

The Battle of Gettysburg took place from July 1 -- July 3, 1863. Although some students of the Civil War tend to downplay its importance to the result of the conflict in favor of the the surrender of Vicksburg to Grant on July 4, 1863, Gettysburg remains a pivotal event in the war. It has been written about endlessly.

Michael Shaara's novel is in four large chapters, one for each day of the battle together with an introductory chapter setting the stage. The story is told in sections devoted alternately to the perspectives and roles of many of the leading protagonists: the Confederate Commanding General Robert E. Lee, his "old war horse" the controversial James Longstreet, and Lewis Armistead, more of whom below. Shaara also describes the British military attache Freemantle, who was a guest in the Confederate camp during the battle and who wrote an important memoir describing his experience. On the Union side Shaara focuses on Joshua Chamberlain, a bookish college professor from Maine who became the hero of Little Round Top, and General John Buford, the cavalry commander whose actions delayed the Confederate advance at the outset of the battle.

There are many excellent historical studies of the Battle of Gettysburg. The most important is the long study by Edward Coddington. Both Steven Sears and Noah Trudeau have written two recent extended studies of the battle. Detailed specialized studies have been written on every aspect of the battle including Buford's role on the first day, Little Round Top on the second day, and Pickett's charge on the third day. These and other works make difficult, challenging reading. It is worth thinking about how such studies differ in intent and content from the novelistic portrayal of the Battle of Gettysburg in "The Killer Angels."

The novel gives a vivid picture of each of the three days of the battle, but it is more selective, focused picture than we get in the histories. The novel concentrates on the events on Little Round Top -- the far left of the Union line on the second day of the battle, July 2. The hero is Colonel Joshua Chamberlain and his men from the twentieth Maine who hold of a furious Confederate charge over the boulders of Little Round Top led by William Oates of Mississippi and help save the Union position. Many years after the battle, Chamberlain and Oates would write extensively about Little Round Top and correspond with each other. Some historians tend to discount the importance of Little Round Top to the result at Gettysburg. Whether or not they are correct, Shaara's novel shows the human drama of the battle in the way a narrative history generally cannot. He captures the heroism on both sides at this revered site.

The novel also concentrates on Pickett's doomed charge on the third day of Gettysburg. He offers a portrayal of General Lewis Armistead, one the the three Confederate General's serving in General Pickett's division. In the pre-Civil War army, Armistead had been a great friend of the Union General, Winfield Scott Hancock who performed admirably on each of the three days of Gettysburg. Armistead died after crossing the Union line in the charge and, as legend has it, with his dying breath asked for Hancock's forgiveness.

The novel form allows the writer to concentrate on specific scenes, as Shaara does well in "The Killer Angels", to a degree the historian cannot. The novel also allows the writer freedom to explore introspectively. The novelist may describe the thoughts of the protagonists to a degree that goes beyond the historical record. Sharra exploits this possibility to the utmost. He gives the reader interchanges between Lee and Longstreet, for example, that are entirely plausible, that make them come alive, and that cast great light upon their activities and motivations during the Battle. We see a great deal of Colonel Chamberlain, of course. The reader hears Sharra recreating Chamberlain's innermost thoughts and is encouraged to think about the making of a hero.

The novelistic form also allows Sharaa to use characters to express their views of the meaning of the War. Sharaa gives the reader a picture of what both sides thought they were fighting for and invites the reader to think further about the Civil War and the Battle of Gettysburg and their significance.

This novel will not replace historical studies for those interested in learning more about the Civil War or about the details of the Battle of Gettysburg. But it is a thoroughly admirable novel which captures something of the harshness and the heroism of the War and of the American character. It will give the careful reader a good understanding, or a good way to work through to an understanding, of the events of these three days in 1863. "The Killer Angels" will encourage the reader to deepen his or her appreciation of, our country's history.

History On A Personal Level

What a great book. I could not put down this book. Not a big civil war buff but was impressed how Shaara put hist into a personal writing. This is a great book to read as the start of his son Jeff civil war series.