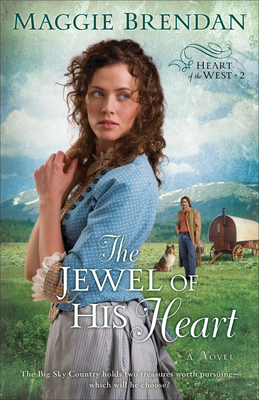 The Jewel of His Heart

Set in 1890s Montana, this second book in the Heart of the West series perfectly captures life on the American frontier, introducing readers to rugged, independent souls and their inner spiritual struggles. Read More

Set in 1890s Montana, this second book in the Heart of the West series perfectly captures life on the American frontier, introducing readers to rugged, independent souls and their inner spiritual struggles. Read Less

All Editions of The Jewel of His Heart

A Love of Her Own

No Place for a Lady

The Trouble with Patience

No Place for a Lady

What a story. Julianna Brady is poor at the beginning. This is something I can relate to growing up poor. I know how it felt to not want to have someone come in your house and see how little you have.
Julianna loses her Mother at the beginning of the story. She desires to know why her father left her when she was young. But the way she ends up connecting with her father is God sent and hard for her to deal with. Because of her father's leaving, she doesn't trust men.
Her story from her Mother's death to end builds her up in fatih in God, growth in her character, and finally trust in one man, Josh McBride. She is also priviledged to get a great job at the newspaper.
Josh is a sheepherder. His story starts with someone painting a picture of him and his dog. I loved way it worked into the story. He discovers some rare stones on his land. For a while he thinks of going into mining until something happens that changes his mind. Josh is alone accept for Andy, his cook, and his sheep dog.
He comes to the point he has to chose between wealth or the greatest Jewel he has found, Julianna.
A beautifully woven story of heartache, grief, tragedies, and love. All throught God's plan unfolds.
This book was such an encouragment to me as I deal with hurt by a family member so I could very well feel for Julianna's feelings about her father.

The Jewel of His Heart takes us to the mountains of Montana in the 1890s, where we find Josh McBride herding sheep with his faithful companion, Shebe. Josh had a falling out with his father three years earlier, which lead to his decision to pursue shepherding instead of ranching. He met, and hired, Andy as his cook, as well as, his sheepherder. Even with quite a bit of years between them, they've become close friends who work really well together. Josh is always telling Andy, "If you were a woman, I'd marry you", because he's an excellent cook!

We also meet Juliana Brady, who lost her mother suddenly, and has no idea where her father is, or if he's even alive. She's not yet eighteen, but already feels all alone in the world. She's so mad at God for not bringing her father home, that she can barely stand to have a conversation that involves Him. She no longer attends church or reads her Bible, and since her mother passed away, she's even more angry. Her best friend, Marion Stockton, insists that Juliana move into her family's hotel indefinitely, since she has no where else to go. Juliana eventually finds a job, meets new friends, and starts to enjoy life again.

Even though Josh is falling for Juliana, he feels she is much too young to be interested in him, and that she could do a lot better than a lowly sheepherder like himself. Juliana has feelings for Josh, but tries not to entertain them because she promised her Mama that she would not depend on a man as her only means of survival; she's determined to take care of herself.
Josh and Juliana encounter some really tough times, but learn to lean on God, their friends, and each other to see them through.

The Jewel of His Heart is excellent!! I simply cannot tell you how much I enjoyed this book, but I'll try my best! At first, I thought No Place for a Lady (book 1) was going to be my favorite book in this series, but now I'm not so sure...these are both wonderful books that will touch your heart. I met so many wonderful people in the town of Lewistown, that I'm sorry to leave them. There was one person I was not overly fond of throughout most of the book, but by the last few chapters, Wes Owen had carved himself a place in my heart. I'm hoping to see him again and find out what happens when God catches up with him! I'm also anxious to find out what happens with Josh's cook/sheepherder, Andy, and his lovely Nellie. I can't wait to read, A Love of Her Own (book 3), releasing in June 2010.

If you haven't had a chance to enjoy The Jewel of His Heart, or No Place for a Lady, please be sure to pick up your own copies as soon as you can...you just don't realize what you're missing! Be sure to visit Maggie at her blog: SouthernBelle Writer