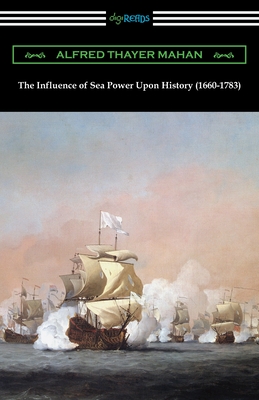 Consider by scholars as the single most influential book in naval strategy, Alfred Thayer Mahan's "The Influence of Sea Power Upon History: 1660-1783," is a history of naval warfare and sea power during the seventeenth and eighteenth centuries that would have a profound influence on the world in the early part of the twentieth century. After the publication of this work the policies outlined in it would soon be adopted by the major military powers of the time ultimately causing the World War I naval arms race. Mahan ... Read More

The Life of Nelson: The Embodiment of the Sea Power of Great Britain

Some Neglected Aspects of War

The Sea War of 1812: A History of the Maritime Conflict--Volume 2

Castles of Steel: Britain, Germany and the Winning of the Great War at Sea

by Hart B H Liddell

The Life of Nelson: The Embodiment of the Sea Power of Great Britain

Some Principles of Maritime Strategy

When A.T. Mahan's opus was first published in 1890, it immediately became required reading in the wardrooms and naval ministries of every major navy from England, Germany, Japan, France, Italy and eventually the United States. Captain Mahan's twin tenets of a strong navy and commercial fleet as the historical basis of effective sea power was found to be of interest, but the premises of the effects of geography, strong fleets and the concept of the "decisive battle" are those which truly found receptive audiences in worldwide naval readers of the day.

The premise of the effects of geography upon sea power as manifested by Mahan seemed to justify the worldwide colonial possessions of the European powers, and the necessity of the acquisition of similar overseas possessions by other countries such as Germany and the United States, who desired to become world sea powers. Within a decade the European powers were caught up in a race to build more warships. Japan began building a feet to control the western Pacific, and after over 30 years of negligence, even the US Navy began to modernize. The concept of the "decisive battle" was given credence at the Battle of Tsushima in 1905 when the Japanese under Tojo annihilated the Russian Baltic Fleet, and the race for big gunned battleships to win the next "decisive battle" was on.

The lack of any other "decisive battles" after Tsushima and the changes in technology with the perfecting of the submarine and communications, and the invention of the airplane, have made Mahan passe to most modern naval readers. Still the twin tenets of a strong navy and commercial trade and communications remain the basis of effective sea power today. The expression of naval power through the ability to keep one's own sea lanes open while being able to deny similar lanes to one's foe is the ultimate expression of sea power. Today we use carrier battle groups instead of battleships or ships of the line, and Aegis destroyers rather than frigates