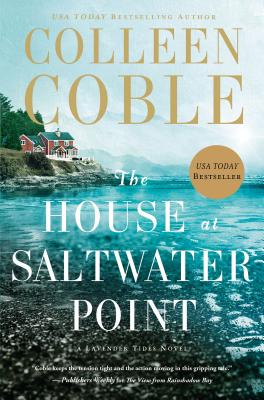 The House at Saltwater Point

USA Today bestselling author Colleen Coble delivers her signature blend of romance and suspense when Ellie Blackmore sets out to find the truth about what happened to her sister. Read More

USA Today bestselling author Colleen Coble delivers her signature blend of romance and suspense when Ellie Blackmore sets out to find the truth about what happened to her sister. Read Less

All Editions of The House at Saltwater Point

The View from Rainshadow Bay

The View from Rainshadow Bay

Another Winner From Coble

Blogger and home renovation expert, Ellie Blackmore, responded with fierce loyalty to the accusations and rumors connected with the disappearance of her sister Mackenzie (Mac). She continually assured herself that the copious amount of of blood on Mac's tall ship's deck did not automatically mean that she was dead. Nor did the evidence that was piling up mean that she was a drug dealer. There must be more to the story.
What a coincidence that Grayson Bradshaw of the Coast Guard Investigative Services was sent to investigate a theft of cocaine that had been previously apprehended in the same small town where he had just learned that he had been adopted from. The appearance of his biological sister, Shauna Bannister, and her new husband in the town where he was visiting his parents, with her bombshell news that he was adopted and was her long lost brother was distracting him from the case at hand, a case that needed his full attention. Shauna and her news were not the only distractions; there also was the sister of his lead suspect.
Colleen Coble has crafted yet another spell-binding mystery. Her ability to reveal facts and unforeseen connections and to plant plausible red herrings, always places her mysteries among my favorites. While this one is not the first book in her current series, it works well as a stand-alone read. If you are a fan of mysteries, whether a fan of Christian fiction or not, you will enjoy the master storytelling of Colleen Coble. I received a complimentary copy of this book from Thomas Nelson through NetGalley. Opinions expressed in this review are completely my own.