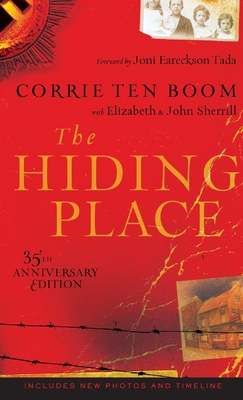 "The Hiding Place" proves that the light of God's love can penetrate even the darkest recesses of despair--places like the Nazi extermination camp at Ravensbruck. After protecting Dutch Jews in a secret room in their home, Corrie ten boom, her sister, and father were imprisoned. Only Corrie survived, but her faith in God remained strong. Read More

"The Hiding Place" proves that the light of God's love can penetrate even the darkest recesses of despair--places like the Nazi extermination camp at Ravensbruck. After protecting Dutch Jews in a secret room in their home, Corrie ten boom, her sister, and father were imprisoned. Only Corrie survived, but her faith in God remained strong. Read Less

All Editions of The Hiding Place

Tramp for the Lord

In My Father's House: The Years Before the Hiding Place

Marching Orders for the End Battle: Getting Ready for Christ's Return

Tramp for the Lord

The biography of Corrie ten Boom's life during World War II is amazing. So much is packed into this profound book! From the very first chapter---no, the very first page!---I immediately connected with the story. It begins in the normal, happy days of Corrie's life, before the German invasion. I was actually surprised at how cheerful everything could be, and all the joy in the ten Boom household. This is the true story of her life.

Who was Corrie ten Boom?
She was the daughter of a watchmaker, and in fact, she was quite a skilled watchmaker herself. With her family being Dutch Christians, the Nazis did not come after the ten Booms---that is, not until later as Corrie and her family, gradually, secretly, became leaders in the Underground. They only did what was best for the forlorn Jews that entered into the ten Boom's house, even though it cost them everything.

When you first "meet" Corrie in the book, she is already a 45-year-old woman. She was at that time filled with such energy and sprightliness, and I believe it is that very outlook she had on life that helped her through the trials of Scheveningen Prison and Ravensbruck Concentration Camp. In the part of Corrie's life that this book talks about, she lives in the Beje (the name of the family's house) with her older sister, Betsie, and their elderly father. It was in their house that I recall a specific section in chapter one that forewarned of the terrors ahead:

...."It was a day for memories. A day for calling up the past. How could we have guessed as we sat there---two middle-aged spinsters and an old man---that in place of memories were about to be given adventures such as we have never dreamed of? Adventure and anguish, horror and heaven were just around the corner, and we did not know."

...."Oh Father! Betsie! If I had known would I have gone ahead? Could I have done the things I did?"

Through everything the ten Boom family endured, they found some way to honor God and actually be thankful for the awful predicaments they were put in. To think that sleeping in damp, flea-infested beds could open an obscure opportunity! As I read chapter after chapter, it seemed that wherever Corrie and Betsie were, strange and wonderful surprises happened. There were so many blessings in the midst of fright and violence, that I simply lost count of them all. I know the reason why these gifts were showered on them; it was their steadfast faith.

Imagine with me, could you have had the courage and wisdom to stand up to a Nazi and tell him:

...."The truth, sir, is that God's viewpoint is sometimes different than ours---so different that we could not even guess at it unless he had given us a Book which tells us such things."

Corrie's story really astounded me. And just as much, or even more so, Betsie's part of the story left me shocked by her selfless thoughts---I wish I could read more from Betsie's point of view.

Yes, there are gruesome parts in this book. Horrific deaths, torturing, fighting, and war. It's a lot to take in and think about. But you'll learn the meaning of The Hiding Place... and if Corrie ten Boom could find such a place in the midst of World War II... then so can we.

The Hiding Place now ranks as one of my favorite books, and I will always treasure it. It's not for young readers, but makes a great read for high school students or adults.

This is an amazing book with a wonderful testimony of this woman. She examplifies God's strategic plan to use us for His plan.

An amazing book, that will inspire both young and old. A book that shows the courage and strength that can be found in family unity.
This testimony shows you the love and the conviction that people had for the Jewish people in the Holocaust. At the beginning of the book we are shown the extraordinary life of a God fearing family. They are well known all over the country of Holland, not only for their good works in watch making but for the caring people they were. They show no partiality for the poor or rich, the weak or strong, Jew or Gentile. They love everyone and welcomed anyone into their little home.
Casper Ten Boom was given the opportunity, when about to be taken to prison, to stay at home if only he would not let any Jews into the house. To this he replied, that he would let anyone who came, into his home.
One of Corrie?s ministries before and during the war was that of teaching those who were mentally handicapped.
The impact through reading the book that I felt was that of the forgiveness that Corrie found in her heart. To forgive those who had so inhumanly treated her family, but more so for those who were responsible for the death of her father and her sister.
As you read through this book you will see that Corrie's Faith grows, as she places her trust in her Heavenly Father. One of Corrie Ten Boom's favourite sayings was,
'There is no pit so deep that He is not deeper still.'
How true this is when we place our trust in Him!