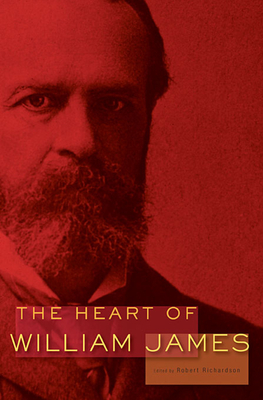 The Heart of William James

A selection of seventeen essays from the writings of pioneering American psychologist/philosopher William James that provide insight into his thinking on emotion, war, habit, determinism, religion, and other topics. Read More

A selection of seventeen essays from the writings of pioneering American psychologist/philosopher William James that provide insight into his thinking on emotion, war, habit, determinism, religion, and other topics. Read Less

All Editions of The Heart of William James

The Principles of Psychology (Vol 1)

The Will to Believe

The Structure of Scientific Revolutions

Frederick Douglass and the Fourth of July

The Ideological Origins of the American Revolution: Enlarged Edition

William James: In the Maelstrom of American Modernism

A Visit With William James

In commemoration of the 100th anniversary of the death of William James (1842 -- 1910), Robert Richardson prepared and edited "The Heart of William James", this collection of seventeen essays by the great American philosopher. Richardson is an independent scholar who wrote a celebrated biography of James in 2006 "William James:in the Maelstrom of American Modernism", together with earlier biographies of Emerson and Thoreau. In this anthology, Richardson offers a brief introductory essay to James and his thought. Richardson also offers short perceptive comments introducing each individual essay, a chronology of James' life, and a basic bibliography. Readers new to James might well read "The Heart of William James" together with Richardson's biography.

The novelist and essayist Marilynne Robinson has written a recent review of Richardson's anthology and of James' thought in "The Nation." I was interested in tracing James' influence on Robinson. She has written a Pulitzer Prize winning novel, "Gilead" which focuses on religion and its role in American life. Robinson has also written about the relationship between religion and science in a collection of lectures, in "Absence of Mind". James' influence is strong in both the novel and the essays. Robinson's review of "The Heart of William James" is titled "Risk the Game". Robinson focuses upon the religious character of James' thought. Other focuses on this complex, many-sided thinker are also possible. The phrase "Risk the Game" in Robinson's title derives from James' essay, "The Dilemma of Determinism" included in Richardson's collection in which James offers a careful discussion of the differences between philosophies of free will and determinism. Instead of contrasting determinism with freedom, James juxtaposes it more modestly with the concept of chance. Near the end of the essay, James explains his preference for the latter term. "Whoever uses ['chance'] instead of 'freedom' squarely and resolutely gives up all pretence to control the things he says are free. For him, he confesses that they are no better than mere chance would be. It is a word of impotence, and is therefore the only sincere word we can use, if, in granting freedom to certain things, we grant it honestly, and really risk the game. 'Who chooses me must give and forfeit all he hath.'" (p. 43) This early essay with its emphasis of change, uncertainty, risk, and individual action captures much of James.

The seventeen essays in "The Heart of William James" are a mix of the familiar and unfamiliar. They are arranged in chronological order beginning with the essay "What is an Emotion" (1884) and concluding with the famous essay "The Moral Equivalent of War." (1910). Most of the essays were published as free-standing works or lectures. Richardson also includes selections from James' books, including "The Perception of Reality" taken from "Principles of Psychology", "Habit" from James' abridgement of the "Principles", "The Will" from "Talks to Teachers", "The Sick Soul" from "The Varieties of Religious Experience" and "Concerning Fechner" from "A Pluralistic Universe". There are no selections from "Pragmatism". Richardson offers instead James' 1899 lecture at Berkeley, "Philosophical Conceptions and Practical Results" in which James used and explained the term "pragmatism" for the first time.

James' thought resists easy summarization, and it is well to be cautious with the single word "pragmatism". Other short descriptive phrases such as "radical empiricism" and "pluralism" are at least equally apt. Readers can study each of these 17 essays in sequence and consider the extent to which they offer a single cohesive philosophy or a philosophical vision which changes with time. Taken individually or as a series, each of these essay offers insights and provocative thinking. Philosophy, for James, is a transformative discipline which effects the manner in which one understands and lives one's life.

The earlier essays, such as "What is an Emotion", "The Perception of Reality" or "The Hidden Self" are among the densest in the collection as James struggles with psychological and philosophical issues in a technical, academic manner. These early essays tend to focus on James the scientist. The penultimate essay in the book, "Concerning Fechner" shows James in a highly speculative mood which may surprise new readers who tend to see James as something of a hard-headed empiricist.

In most of the essays, James tends to write more for an audience of non-specialists than for psychologists or academic philosophers. In his passion, clarity, and immediacy, James writes masterfully. The style of the essays is intertwined with their thought in their individuality and force. James rejects the philosophical idealism of his day together with scientific materialism as presenting one-sided, abstract, monistic views of life. James uses anecdotes and examples from daily life together with quotation and discussion from writers such as Tolstoy, Robert Stevenson, Emerson, and Walt Whitman to capture a sense of individuality and pluralism and to draw the reader in to life in its complexity and messiness.

Readers new to James may enjoy most three related essays in the middle of the collection, "The Gospel of Relaxation", "On a Certain Blindness in Human Beings", and "What Makes a Life Significant". In the first of these essays, James describes and critiques the tendency of Americans to stress, overwork, and tense, unfulfilling effort. In "On a Certain Blindness", a favorite of James himself, James explores questions of toleration and openness to others and to ideas different from one's own in a democratic society. Richardson points out that this essay "deserves a place among the defining documents of American democracy". (p.145) In "What Makes a Life Significant" James continues his exploration of the value of differences in ideals and in ways of living. He combines this question with the more basic and difficult question of what living a valuable and rewarding life involves. Too many writers and philosophers since James have tended to back away from this question. James answer combines wisdom with eloquence of expression as he maintains that a life worth living is one that combines ideals of the individual with "pluck and will" and action. While conditions change with time and progress, the contours of a good life, for James, remain largely constant. He summarizes: "The solid meaning of life is always the same eternal thing -- the marriage, namely, of some unhabitual ideal, however special, with some fidelity, courage, and endurance; with some man's or woman's pains. -- And whatever or wherever life may be, there will always be the chance for that marriage to take place." (p.181)

James's works will reward close reading and rereading and reflection. Richardson's anthology delivers the promise of its title by presenting "the heart" of William James. Interested readers might proceed to longer, additional works such as "The Varieties of Religious Experience", "Pragmatism" and "A Pluralistic Universe." This collection will benefit both readers new to James and readers who wish to revisit him.