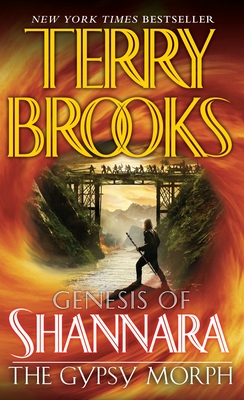 Kirisin Belloruus, a young elf entrusted with an ancient magic, must deliver his entire civilization from a monstrous army. And Hawk, the rootless boy who is nothing less than destiny's instrument, must lead the last of humanity to a latter-day promised land before the final darkness falls. Unabridged. 1 MP3 CD. Read More

Kirisin Belloruus, a young elf entrusted with an ancient magic, must deliver his entire civilization from a monstrous army. And Hawk, the rootless boy who is nothing less than destiny's instrument, must lead the last of humanity to a latter-day promised land before the final darkness falls. Unabridged. 1 MP3 CD. Read Less

All Editions of The Gypsy Morph

The Sword of Shannara

The Elfstones of Shannara

Bearers of the Black Staff

Needed a good copy of this last book in the Genesis of Shannara series and was able to get it here! Always look to Alibris when you need a specific book!

Good continuing story. Seemed a little flat at times, nothing spectaular, but I do enjoy Terry Brooks as an author. Usual "good triumphs over evil" at the end. A little biblical in the chosen people theme, however. I suppose this tired old earth would survive with a small population somewhere to carry on in case we are stupid enough to instigate a nuclear winter.

Terry Brooks does not disappoint. Fifty pages in, and my heart is racing with excitement, anxiety and anticipation! After recovering the Loden, Kirisin has done some growing up. But, he has a lot more to do in order to fulfill his charge from the Ellcrys. His mind is analyzing what has happened with Erisha, the demon Culph, and what he must do in order for the Elves to utilize the Loden. Causing him to have a vision that raises more questions than answers. The demon army led by Findo Gask is waiting at Arborlon for Little K and the Elfstones return. So much sacrifice, growing up, and determination in their survival has happened in order for the group to move on to a safe place, before this world is destroyed. Findo Gask is far from giving up! Kirisin, the Loden and the Knights of the Word have escaped his grasp. With his best lieutenants dead, he is forced to replace them with less competent but still highly driven ones. The Ghosts have really changed since their little home in Pioneer Square, and are not the same band of kids they once were. What has happened to Candle?s gift?! My hope is that Simralin will survive with the Elfstones in hand, discover their magic, and help defeat the relentless army. With the demon army led by Findo Gask, finally caught up with the children, a civilization of Elves, and various Lizards, Spiders and mutants, they fight to delay the inevitable, at the Columbia River. The vanishing/invisible demon, Findo Gask?s new lieutenant, is still hunting Hawk. Trying to draw him out by picking off the children. Hawk is seriously scared, and has lost his faith in his charge. Continuing with fear and his lose of faith, Hawk knows he must lead the caravan to a safe place in order to survive the destruction of the world, as they know it.