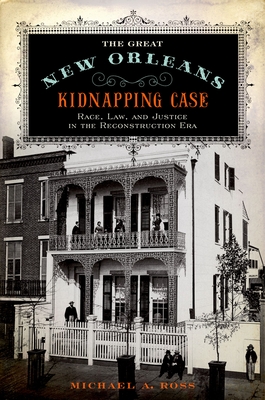 by Michael A Ross

In June 1870, the residents of the city of New Orleans were already on edge when two African American women kidnapped seventeen-month old Mollie Digby from in front of her New Orleans home. It was the height of Radical Reconstruction. The old racial order had been turned upside down and black men now voted, held office, sat on juries, and served as policemen. Nervous white residents fearing impeding chaos pointed to the Digby abduction as proof that no white child was safe now that slavery had ended and the South had been ... Read More

In June 1870, the residents of the city of New Orleans were already on edge when two African American women kidnapped seventeen-month old Mollie Digby from in front of her New Orleans home. It was the height of Radical Reconstruction. The old racial order had been turned upside down and black men now voted, held office, sat on juries, and served as policemen. Nervous white residents fearing impeding chaos pointed to the Digby abduction as proof that no white child was safe now that slavery had ended and the South had been "Africanized." Newspapers opposed to Louisiana's biracial Reconstruction government stoked those fears by reprinting rumors that the stolen Digby baby had been sacrificed in a Voodoo ceremony on the shore of Lake Pontchartrain. Louisiana's twenty-eight year old Reconstruction Governor Henry Clay Warmoth, in turn, hoped to use the kidnapping to prove that his newly integrated police force, trained in the latest investigative techniques from Boston and New York, could solve the crime. He offered a huge reward for the return of Mollie Digby and the capture of her kidnappers, and his police chief put his best Afro-Creole detective, the dashing Jean Baptiste Jourdain, on the case. The Associated Press sent the story out on the wire and newspaper readers around the country began to follow the New Orleans mystery. Leads poured in from across the Gulf Coast and from as far north as Ohio and New York, and Jourdain became the first black detective in the United States to make national news. Interest in the story only grew when police and prosecutors put two strikingly beautiful Afro-Creole women on trial for the crime and a tense courtroom drama unfolded against the backdrop of a yellow fever epidemic and the momentous events of Reconstruction in the South. A stunning work of historical recreation, Michael Ross's The Great New Orleans Kidnapping Case is the first full account ever written about an event that electrified the South at one of the most critical moments in the history of American race relations. Ross brings the era back to life, leading readers into smoke filled concert saloons, Garden District drawing rooms, sweltering courthouses, and squalid prisons, and he uses the Digby kidnapping, investigation, and trial to offer important new insights into the complexities and possibilities of the Reconstruction era. Read Less

All Editions of The Great New Orleans Kidnapping Case: Race, Law, and Justice in the Reconstruction Era

Carnival of Fury: Robert Charles and the New Orleans Race Riot of 1900

The Amistad Rebellion: An Atlantic Odyssey of Slavery and Freedom

Conspiracy in the Streets: The Extraordinary Trial of the Chicago Eight

Michael A. Ross' "The Great New Orleans Kidnapping Case: Rage, Law and Justice in the Reconstruction Era" tells the story of a once famous crime that, until his retelling, was largely forgotten. The book has elements of a police procedural, a trial story, and a history of Reconstruction. Ross, an Associate Professor of History at the University of Maryland, holds both a law degree and a PhD in history. Law and history, as well as suspense, play large roles in this book. Ross is the author of an outstanding book on Supreme Court Justice Samuel Miller which portrays on a national canvass Reconstruction history and the Supreme Court. Ross describes this new book as a "microhistory" because it focuses on a single event with characters who have largely disappeared from the historical record. Ross quotes the poet William Blake's injunction "to see the world in a grain of sand" as his goal in using a single historical episode for the insight it may provide on broader issues.

On June 9, 1870, a seventeen-month old baby, Mollie Digby, was kidnapped from a poor, flood-prone area of New Orleans known as the "back of town". Young Mollie had been left together with her ten-year old brother in the custody of a teen-age babysitter. A young African American Creole woman and an older woman of a darker complexion distracted the sitter and young boy and abducted the baby. The Digby kidnapping created a sensation in New Orleans which ultimately spread through the United States. The Governor of Louisiana, and the police chief of New Orleans faced pressure from all sides to find the guilty parties and bring them to justice.

Ross sets the story of the Digby kidnapping against the background of Reconstruction-Era New Orleans. Relations between the races had been somewhat different in the Crescent City than in the remainder of the deep South due to the large Creole population which antedated the Louisiana purchase. African American Creoles had achieved positions of education and influence and there had been a toleration of long-term sexual relationships, if not marriages, between people of different races. With the end of the Civil War, this relatively relaxed attitude came under pressure from supremacists. The state government at the time included Creole, white, and African American individuals and strong civil rights laws, but the situation was precarious. The Digby case, in which persons of color had abducted a white baby had potentially explosive racial implications.

Ross adds detail to his picture of 1870 New Orleans. The Digby family consisted of Irish immigrants who had worked their way up the economic ladder but faced their own difficulties in the city. Then and now, the city was rife with crime and immorality, earning its moniker as the "big easy". Panicked citizens assumed that the Digby baby had been kidnapped for Voodoo rites, and Ross describes the nature of Voodoo and its presence. The book thus captures a strong sense of the New Orleans of the time.

The book explores the police investigation of the crime and focuses on the efforts of an African Creole detective, Auguste Jourdain who became one of the first American sleuths to gain national recognition for his efforts in the case. After two months, the case led to the arrest of two African Creole sisters, Ellen Follin and Louisa Murray. Both women were attractive, elegant, middle-class and educated and conducted themselves with dignity during the judicial proceedings. There was substantial evidenced marshaled against them for the crime.

Most of Ross' book describes in detail the three legal proceedings brought against the sisters. The first was a preliminary proceeding designed to determine whether the case should go further. This procedure was ordinarily routine, but it stretched into a mini-trial due to the notoriety the case had received. The case then had to be heard by a Grand Jury in what proved to be an extended proceeding before the case was cleared for a criminal trial. Finally the case was tried in January 1871.

Ross tells the story of the investigation and the legal proceedings suspensefully and well. Although central to the book, the lengthy courtroom scenes tend to make the book bog down. Nevertheless, the story is told artfully. The outcome of the proceedings, in Ross' telling, remains in doubt until the jury foreman dramatically rises to announce the verdict.

Unearthing the story of the Digby kidnapping required a great deal of laborious, patient historical research in obscure sources, as Ross makes clear. Beyond the interest of the case and the trial, the book has a broader point. The case was investigated meticulously and tried by capable counsel for both sides before impartial judges and a jury which had both white and African American members. Ross makes clear that the trials were fairly conducted with respect for the due process rights of the accused. The trial, counsel, and jury the defendants received was possible only for a brief historical moment during Reconstruction. Ross explores why the Digby case, amid all the publicity, could be tried and resolved fairly in contrast to the highly prejudicial court proceedings that followed the end of Reconstruction and continued well into the 20th Century. In his discussion of the near-forgotten event of the Digby trial and its aftermath, Ross does indeed "see the world in a grain of sand".

"The Great New Orleans Kidnapping Case" could well appeal to readers who enjoy reading about criminal trials. The more likely audience will be readers with a serious interest in Reconstruction history.