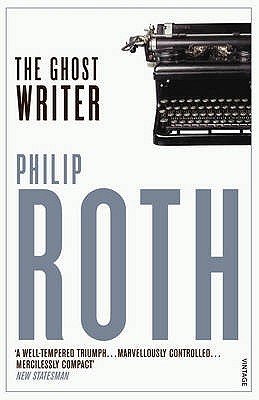 When talented young writer Nathan Zuckerman makes his pilgrimage to sit at the feet of his hero, the reclusive master of American Literature, E. I. Lonoff, he soon finds himself enmeshed in the great Jewish writer's domestic life, with all its complexity, artifice and drive for artistic truth. As Nathan sits in breathlessly awkward conversation with his idol, a glimpse of a dark-haired beauty through a closing doorway leaves him reeling. He soon learns that the entrancing vision is Amy Bellette, but her position in the ... Read More

When talented young writer Nathan Zuckerman makes his pilgrimage to sit at the feet of his hero, the reclusive master of American Literature, E. I. Lonoff, he soon finds himself enmeshed in the great Jewish writer's domestic life, with all its complexity, artifice and drive for artistic truth. As Nathan sits in breathlessly awkward conversation with his idol, a glimpse of a dark-haired beauty through a closing doorway leaves him reeling. He soon learns that the entrancing vision is Amy Bellette, but her position in the Lonoff household - student? mistress? - remains tantalisingly unclear. Over a disturbed and confusing dinner, Nathan gleans snippets of Amy's haunting Jewish background, and begins to draw his own fantastical conclusions... Read Less

All Editions of The Ghost Writer

The Stories of John Cheever

I had been reading the late Philip Roth's (1933 -- 2018) novels and exhausted those readily available in the local library. I paid an all-too-rare visit to the only walk-in used book store in my neighborhood, now, sadly, also gone. The book store didn't have the Roth novel I hoped to find, but I bought an inexpensive used hardback copy of this book, "The Ghost Writer" (1979) instead. It was a lucky find. I had just read Roth's novel, "Exit Ghost" (2007), written 28 years after "The Ghost Writer". The latter book was a sequel to the former and uses some of the same primary characters, Nathan Zuckerman and Amy Bellette, both of whom have become old, ill, and feeble. Memories of the short story writer E.I. Lonoff (a fictitious person of Roth's imagination), a major character in the "Ghost Writer" also play a prominent part in the latter novel.

Set in 1953, in a remote country home in western Massachusetts, "The Ghost Writer" describes a visit by the ambitious, fledgling 23-year old writer, Nathan Zuckerman, to the home of a 56 year old reclusive writer of short stories, E.I. Lonoff, and his wife of 35 years, Hope. The young Zuckerman, in awe of the elder writer, had sent him four short stories to review. Lonoff, favorably impressed, invites the young man to dinner. When a severe snowstorm develops, Lonoff invites Zuckerman to spend the night. The fourth primary character for this short book of an evening and morning is Amy Bellette, a beautifully mysterious young woman slightly older than Zuckerman who is a guest at the Lonoff home working on his manuscripts. Bellette came to the United States from England some years earlier at Lonoff's invitation, but her past is left obscure.

Zuckerman idolizes Lonoff, himself a Jewish immigrant, for his years of devotion to the art of writing and for the terseness, seriousness, and sharpness of his short stories which invariably feature young, wandering, and lost Jewish individuals as their primary characters. Zuckerman was raised in a modest Jewish home and community in Newark, New Jersey. Although he had been close to his family, his father and the community have taken offense at one of Zuckerman's short stories which they believe cast the Zuckermans and their community in Newark in a bad light. Zuckerman seeks some support from Lonoff and also tends to view this remote, silent, and rather icy man as a father figure.

As with much of Roth, the book is short, the story tangled, and the writing works on many levels. Zuckerman gets the literary encouragement, and more, that he desires from Lonoff. He toasts the young man fulsomely and observes that "his work has turbulence" (p. 33) and that Zuckerman's literary voice "begins at around the back of the knees and reaches well above the head". (p. 72) Lonoff also shuts himself off from life, is rigid and straight-laced, and offers no emotional or physical companionship to the long-suffering Hope. His relationship with young Amy Bellette is the source of the stormy sexual tension and denouement of the story.

The novel also explores the world of writing fiction and its relationship to that nebulous thing called life. It does so in the portrayal of Lonoff, in Zuckerman's awakening to the man, and in Zuckerman's new understanding of what his chosen life as an author may entail. The book, as does the later "Exit Ghost" also shows multiple levels in authors and in stories. Roth creates his character Zimmerman who narrates the story and the author Lonoff. In the process, Zuckerman offers a paraphrase of the story he has written about Newark life which has so bothered his father who believes it violates family privacy and encourages anti-semitism. And, although at first the matter is left cunningly ambiguous, during his evening at the Lonoff home, Zuckerman, smitten by Amy Bellette and eavesdropping on a telling late-night conversation between Bellette and Lonoff, invents a story under which Amy tells Lonoff that she is in fact Anne Frank and the author of the famous diary. Zuckerman wants to take Anne Frank/Amy Belette home to his parents as his wife to be to satisfy their concerns about his attitude towards his Jewishness. In the frenetic ending of the story as Hope walks away from the marriage in the snow and the cold, Lonoff makes a half-hearted attempt to get her to stay. He has both the callousness and the writerly instinct to give Zuckerman a pad of paper and a pen, telling him that he will make a story of the incident some day.

The title of the novel, "The Ghost Writer" is itself ambiguous and straddles both Zuckerman and Lonoff. Both writers are fictitious creations of Roth. Lonoff is a ghost because, as he sadly recognizes and as Zuckerman comes to understand, he lacks his own active life and is a shade instead, sitting at his typewriter. Zuckerman is also a "ghost writer" because of the outrageous story he invents and puts in the mouth of Amy Bellette. And ironically, in the telling of the book, Zuckermann fulfills Lonoff's understanding that Zuckerman will make a story of the break-up between Lonoff and Hope. An important literary allusion which mirrors the story is to Henry James' story, "The Middle Years" which Zuckerman ponders, quotes, and paraphrases during his evening at the Lonoffs. As James had his own fictitious character describe the novelist's work in the story: "we work in the dark-- we do -- what we can -- we give what we have. Our doubt is our passion and our passion is our task. The rest is the madness of art." (p. 77) The destructive force of writing in James' story finds its parallel in both Lonoff and Zuckerman.

This book, Roth's 11th novel, is a coming of age story of the growth of a writer and a tale of the difficulties and myths that surround creative effort.